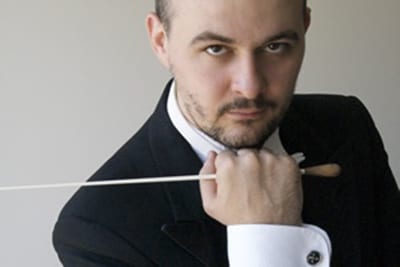 Artistic Director Predrag Gosta led the evening from the keyboard, whether the portable chamber organ or the harpsichord. The program leaned in the direction of a handful of featured soloists.

Dietrich Buxtehude’s prelude “In dulci jubilo” opened the concert, performed solo by Brad Hughley behind the audience on the church’s Rosales pipe organ. Hughley, who is organist and choirmaster at St. Bart’s, followed up later with J.S. Bach’s organ prelude on the same tune, and in a time-honored tradition allowed the organ’s Zimbelstern to play throughout. The Zimbelstern is a “toy” organ stop made of small bells mounted on a revolving star-shaped wheel, producing a continuous tinkling sound, commonly found on northern European pipe organs in Bach’s day. Familiarly associated with Nativity music, the cheerful sound also counterbalances the prelude’s formal intricacy. Hughley’s final solo of the evening, Georg Böhm’s chorale partita “Freu dich sehr, O meine Seele,” kicked off the second half. For the first time in the concert, Hughley opened up the Rosales to its full sound for the work’s conclusion.

The agile voice of soprano Wanda Yang Temko, who soloed in New Trinity Baroque’s performance of Bach’s “B Minor Mass” this past March, was featured in four works: Christoph Bernhard’s “Fürchtet euch nicht,” the substantial “Cantata pastorale per la nascità di Nostro Signore” by Alessandro Scarlatti, and two popular arias by George Frideric Handel, “Rejoice greatly” (from “Messiah”) and “Let the bright Seraphim” (from “Samson”). The latter Handel aria closed the concert, most notably including some delightful moments of ornate duet between soprano Temko and trumpeter Amanda Pepping.

Pepping did not play a “natural trumpet” as stated in the program, but a modern-day Baroque trumpet that has three vent holes located at harmonic nodes. This is different from a natural trumpet, which has none. While Pepping is said to be an enthusiast, she is not exclusively known as a Baroque period performer. According to Pepping, the vent holes make playing a Baroque trumpet a little easier for someone who switches back and forth between period and modern trumpets. Although her performance was not picture perfect in Giuseppe Torelli’s Trumpet Concerto in D Major, due to a few fluffed notes in mid-register, the upper-range trills and 16th-note figures, executed entirely with the lips on the valveless instrument, were impressive, especially given that Pepping had already played a pit gig performance of Tchaikovsky’s “Nutcracker” with the Gwinnett Ballet Orchestra on modern valved trumpet that afternoon. (Which, incidentally, Gosta also conducted.)

Violinist Evan Few and cellist André Laurent O’Neil offered up some virtuosic playing in a chamber sonata by Buxtehude with the underlying basso continuo played by Gosta on the harpsichord and William Hearn on the chittarone. As for the rest, including the premiere of Gosta’s string-orchestra arrangement of a passacaglia by Buxtehude, the ensemble fared well in performance, despite the busy celebratory season and its time-crunching demands upon many musicians.

The concert also served to promote New Trinity Baroque’s latest CD, “Baroque Christmas,” on the independent Edition Lilac label. The disc, Gosta said, did not get released in time for Sunday’s concert, because of editing and seasonal production delays. Instead, the audience was offered the opportunity for advance purchase at a discount. Five of the evening’s dozen selections are on the recording, plus two more works: Arcangelo Corelli’s concerto grosso “Fatto per la notte di Natale” and the cantata “Das neugeborne Kindelein” by Buxtehude. The disc also includes soprano Kathryn Mueller in addition to Temko, and a somewhat different lineup of musicians than the concert’s roster.  It’s expected to be available for purchase online soon at New Trinity Baroque’s website.