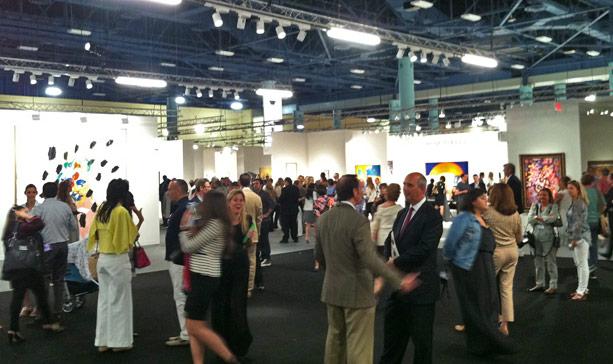 Shopping is not my thing. This is an impediment to enjoying the Hydra-headed art fairs spawned by Art Basel Miami Beach, which take over Miami for five days every December. If you remove the high-art gloss, it’s essentially a shopping mall, spread out in multiple venues around the city, filled to the gills with art.

It’s the art business at its most naked. I especially liked seeing the mighty Gagosian Gallery, which plants uniformed guards in every room of its New York galleries as if it were a museum, down in the scrum like everyone else. People who complain about the “commodification” of art can get a full-blown huff going in no time.

But, hey, we’re all part of the system. Even William Powhida’s hilarious screeds on art world politics and banality were for sale in Miami. Not that there’s anything wrong with that; we all have to make a living. It was great to see Jackson Fine Art, Whitespace and Georgia State University participating. But art world denizens like to think theirs is a higher calling, so it’s amusing to see them knocked off their, ahem, pedestals.

Powhida’s works were at SEVEN, one of the smaller venues. Call it the “Unfair.” This consortium of New York galleries rented and rehabbed a space large enough so that each could present meaningful groups of works by artists in its stable.

Ronald Feldman Fine Arts gave a good deal of real estate to British-Israeli artist Yishay Garbasz, showing works from three photographic series that explored different but related aspects of her identity and personal history. All were journeys. Garbasz traveled throughout Israel making “The Fences,” landscapes, often grand ones, marred by the wall that also scars the Israeli psyche. The elegiac photographs in “In My Mother’s Footsteps” traced her mother’s path though Nazi Germany’s concentration camps. Most startling, a wall of photographs from “Becoming” (2008-2010) sampled the weekly nude self-portraits through which the artist documented her transformation from male to female. This is the kind of piece that gathers impact and meaning as it grows; it needed the space afforded here to do it justice.

Miami’s museums, including a number owned by the city’s impressive cadre of private collectors, brought intellectual heft to the party. The Bass Museum, a charming Art Deco building with a revamped interior courtesy of Arata Isosaki, mounted two provocative solo shows by au courant European artists Laurent Grasso and Erwin Wurm.
In “Portrait of a Young Man,” Grasso staged an intervention that transformed the museum’s collection of second-rate Renaissance paintings and sculptures into an engaging multimedia meditation on science and science fiction, rationality and imagination, and paradoxical truths. Winner of the Duchamp Prize, the French artist seemed to nod here to Surrealist René Magritte, especially when he interspersed drawings and paintings among the museum’s collection that could have passed for “period” but for the insertion of a levitating boulder or, as at left, a Renaissance version of a UFO.

Wurm would seem the more likely heir to Duchamp, judging from the bulbous cast sculptures of his underwear (briefs, not boxers, as I recall) stuffed with plaster. His figurative sculptures sans figures — hoodies and pant-legs, which look as if worn by an invisible man — had seemed gimmicky when seen in booths at the fair, but they made sense in the context of “Beauty Business,” which amplified his fusion of architecture and body, home and body: clothing is the skin I live in. If Stonehenge had mated with Fernando Botero’s inflated figures, the progeny might be Wurm’s “Bobs” — huge, voluptuous gray-painted styrene architectural fragments whose “doors” and “windows” verge on pornographic.

Wurm’s work, it seems, is easily misunderstood. He bridled during a talk when the show’s curator called it humorous. Describing his philosophy as “critical cynicism,” the Austrian artist aligned his work with the bleak wit of Bruce Nauman. And speaking of cynicism, Wurm seemed to toy with his audience in his “Drinking Sculptures.” Assemblages constructed from furniture parts, these mutant home liquor cabinets were stocked, and liquor was dispensed during the opening, as if in a nod to relational aesthetics. Wurm had also hired performers to drink until drunk. Amid the jollity, the guests might not have noticed that each piece was named for an artist who was an alcoholic.

The downer continued at the Rubell Family Collection, even though its exhibition was titled “American Exuberance.” As artist John Miller wrote, “Paradoxically, exuberance is linked to stagnation, entropy and ruin,” and his installation in the first gallery (above) set the tone. A different sort of architectural ruin than Wurm’s, Miller’s consisted of scattered fragments of columns and pedestals bearing the detritus of civilization, from plastic bottles to guns, all glazed in gaudy gold: a blinged-up Ozymandias. Hannah Greeley’s morose tableau “Dual,” a view of two restaurant booths with plastic “leather” seats, fake wood and awful art, evoked Degas’ “The Absinthe Drinker” and Hopper’s “Nighthawks.” I found it a more powerful version of Wurm’s drinking sculptures.

The Rubell Collection exhibition spoke to one of the other meanings of “exuberant”: extreme or excessive in degree or size. Lisa Yuskavage’s paintings of grotesquely buxom women made the case. (In art as in culture at large, the proportions of the storefront mannequins in Miami were closer to Lonnie Anderson than Kate Moss.) Also to the point, the Rubells have an inclination toward work that walks the line between ambitious and over the top. It’s possible to describe the conceptual framework that supports Richard Jackson’s paint-spewing machines, but, as elaborate as they are and as expensive as they must be, the pieces are one-liners.

Not much joy here. But there was plenty just outside the door.

The Wynwood district, a gentrifying neighborhood of empty warehouses, has become what has to be one of the world’s largest outdoor street-art galleries. Artists from around the world have festooned the warehouse walls, at the invitation of developer Tony Goldman and Primary Flight, an organization similar to Atlanta’s Living Walls. In fact, Living Walls installed three murals in Wynwood during the fair, by Argentinians JAZ and EVER and KNOW HOPE, an Israeli artist who has just completed a mural in Atlanta as a Living Walls project.

Whether this is your cup of tea or not, the skill and sheer number of artists engaged in this kind of work are impressive. So is the variety of expression. It’s fascinating to see that many artists infuse their work with their native artistic traditions. The painting style of Byzantine icons flavors a mural by a Greek artist, for example, and pre-Columbian imagery appears in a mural by a Mexican.

Taking all the definitions of “exuberant” into account, the word could be the umbrella descriptor for the whole flamboyant Miami experience.