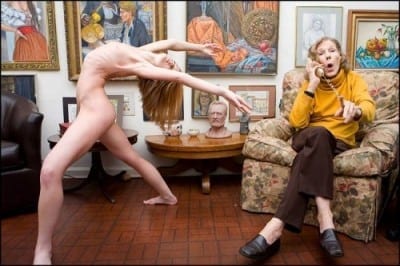 Atlanta Celebrates Photography, the annual autumn festival of speakers, exhibits and other events, is in full swing. In other words, you can barely turn around, let alone walk into a gallery, coffee shop or museum, without running into some manifestation of the photographic arts. This is a good thing. Many good things, actually. We’ve reviewed a gracious plenty; notes on a few more follow.

“David S. Johnson: Photographer.” The Hammonds House Museum showcases the work of the octogenarian photojournalist, who chronicled the life and times of San Francisco’s Fillmore District during the late 1940s and ’50s, when it was a lively African-American neighborhood. Johnson, who was Ansel Adams’ first black student, was mentored by Minor White, and he made good use of that education. Johnson’s unerringly composed street scenes exude the vitality of his subjects and the moment. The joy he captures in his portraits of musicians in performance takes an overfamiliar genre to a different place. Be sure to watch a videotaped interview with the artist, and ask curator Kevin Sipp about the history embedded in “Melrose Record Shop/ Bilbo Is Dead” (1947, below). Hint: Bull Connor and Maya Angelou. Through November 13.

“2011 Ones to Watch.” Mary Stanley scoured the country to find the 10 artists in this roundup, which does double duty as the debut of the Mary Stanley Project Space in the Marquis Two Tower downtown. Though the group is intentionally diverse, a number of these photographers share a sense of theater. Brendan Kingsley’s Hopper-esque “Night Bloom,” an image of a lone gasoline pump isolated against a night sky, could be a frame from a film noir. In Holly Andres’ “Glowing Drawer,” trepidatious young girls approach said drawer in a shivery, expectant moment like something out of a Nancy Drew mystery. Sarah Small choreographs the intersection of two strangers in the strangely compelling “Laura at Evelyn’s” (below), from her aptly named series “Delirium Construction.” It is shot in the home of the older woman in the picture, who points an admonishing finger in the direction of the camera as if oblivious to the naked and flamboyant dancer beside her. Through October 29. Noon-6 p.m. Thursdays and Fridays and by appointment.

“iPhonography.” The iPhone has become a tool for serious photographers. Atlanta filmmaker Eric De Fino, who is working on a documentary about iphotographers, organized this exhibition, which features Sion Fullana (whose “Welcome to the Wonderful World of the Kid Who Battled His Own Shadow” is below) and fellow members of the Mobile Photo Group, a cooperative of like-minded artists. The iPhone camera is a boon to street photographers, who can be nimbler and more surreptitious than ever in capturing candid shots, such as Anton Kawasaki’s pictures of singular New York characters. Carlein van der Beek’s veiled, painterly abstractions suggest the possibilities of in-camera manipulations.
At Marquis Two Tower. Through December 31. By appointment only; call Eric De Fino at 404-213-4600.