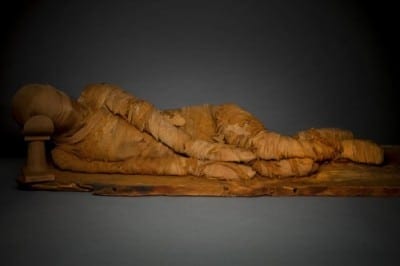 Halloween, as skeletons and headstones on front lawns suggest, has its roots as a festival of death. Today, holiday treats sugarcoat the fears that our ancestors sought to appease through ritual. The ancient Egyptians, however, had a better idea: live forever. The Michael C. Carlos Museum, Atlanta’s go-to institution for things Egyptian, explains it all in “Life & Death in the Pyramid Age: The Emory Old Kingdom Mummy,” on view through December 11.

The 4,000-year-old mud-brown figure (shown above) is the star of the show. He is, in fact, among the  dozen extant mummies that date from Egypt’s Old Kingdom, when mummification practices were still evolving. Emory theology professor William A. Shelton acquired the mummy in the 1920s during a buying spree in the Middle East, an adventure that included navigating past warring Brits and Arabs in a machine-gun-mounted, armor-plated Rolls-Royce.

No one realized how important the mummy is until Egyptologist Peter Lacovara joined the Carlos staff in 1998. By then it was in such bad shape that conservators wondered whether they could put Humpty Dumpty together again. But restore it they did, in a two-year process recounted in the fascinating video in the exhibition.

Lacovara has mixed tomb objects from the Carlos collection — many acquired with this show in mind — with loans, large-scale photographs and informative texts to build a picture of ancient Egyptian culture, its beliefs and its preparations for the afterlife. Some things never change: in one relief, a man walks his dog, and no self-respecting royal woman would be caught dead without her jewelry.

This week is a particularly good time to visit. Emory’s Dr. Gay Robins will give a lecture on Old Kingdom art at 7:30 p.m. Thursday, October 20, in the museum’s reception hall. The first of two “Make Your Own Mummy Workshops for Children” will take place Sunday, October 23, from 2 to 4 p.m. Children ages eight to 12 will make fish mummies after a visit to the galleries, and on November 6 they will anoint the mummified body with scented oils and practice the art of wrapping the mummy with strips of fine linen. $12 for museum members; $15 for non-members. Pre-registration is required by calling 404-727-0519.