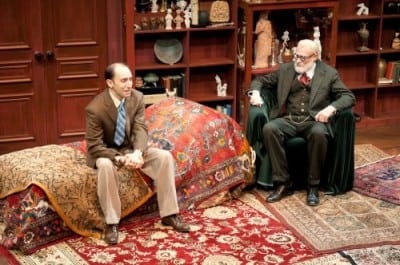 Review: C.S. Lewis, and God, on the couch in “Freud’s Last Session”

The notorious wit Quentin Crisp was once asked whether he held any religious beliefs. “Not really,” he answered. “I can only believe in what is here. But that’s nothing. Any fool can believe in what’s self-evident. It takes a genius to believe a palpable lie.”

If you can imagine Sigmund Freud as the fool who believes in what’s self-evident and C.S. Lewis as the genius who believes a palpable lie, you’ll have something of the idea behind “Freud’s Last Session,” on stage at Theatrical Outfit through November 6. For tickets, click here.

The play, one of the longest-running off-Broadway hits in recent years, dramatizes an imagined meeting between Freud and Lewis in the early 1930s in which the two great minds have a wide-ranging discussion centered on Lewis’ embrace of Christianity. Playwright Mark St. Germain is the author of several similar dramas that flesh out encounters between historical figures: his play “Camping With Henry and Tom” depicted conversations between Henry Ford and Thomas Edison during their hunting trips in the early 20th century. “Freud’s Last Session” became an unexpected word-of-mouth hit when it played in the world capital of psychoanalysis, New York’s Upper West Side; besides Atlanta, productions are now under way or being planned in Chicago, Detroit and Sacramento.

Andrew Benator, as Lewis, brings a boyish earnestness to the role: he’s one part wide-eyed spiritual seeker and one part child. David De Vries, as Freud, is especially impressive in his overarching sense of wonder and curiosity about human beings, balanced by a cranky, exhausted cynicism. Having just fled the Nazis in Vienna, Freud is in the late stages of oral cancer. He has an unsentimental directness when he speaks about his decision to eventually kill himself, but a real tenderness when he talks of his daughter or his collection of ancient objects.

The two-man play also seems to have a third star: Isabel and Moriah Curley-Clay’s fantastic set. Freud’s office is detailed and realistic, with the famous couch on rich Oriental rugs in a darkly paneled London study, statuettes crowding the overflowing bookshelves. Through a window we see the bare branches of a tree swirling into an abstract mandala that expands above and beyond the walls of the set.

Directed by Jessica Phelps West, the show clips along with a lot of humor, keeping a heavy debate lively, funny and interesting. Freud doesn’t pull any punches, and Lewis is an interesting sort of believer, one who admits that he has more doubts than true convictions. They’re like intellectual detectives, piecing together bits of information about each other, trying to find the weak spot in the other’s mental and spiritual beliefs. But the show lacks the real sparks that are needed to keep a two-man play like “Session” dynamic.

Perhaps we know too well from the beginning that the goings-on will lead to nothing conclusive. A play about a murder can reveal everything in the final act; a play about the existence of God will never tie things up to the satisfaction of everyone in the house. And because they’re historical figures, we know that Freud doesn’t convert and Lewis doesn’t storm out in tears. The show doesn’t have that “anything might happen” feeling that is part of the suspenseful pull of live theater. The dialogue is at its best when the two men wander into personal matters: memories of their respective fathers, family life, friendship, escaping wartime violence.

“Freud’s Last Session” traipses through some interesting territory, but somehow it never really pulls us up close to the conflicted and conflicting characters on stage. It brings to mind those late-night debates in freshman dorms, both in its spirited intellect and lively humor, but also in its familiar sense of a frustrating, inconclusive stalemate.