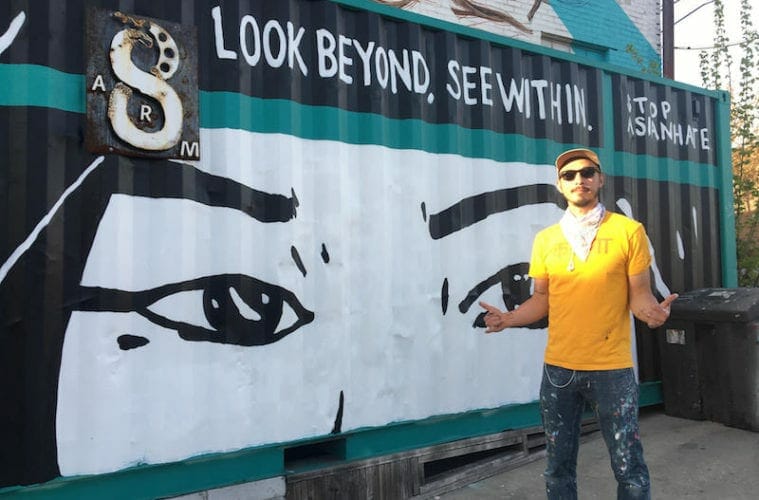 The Atlanta muralist known as Sanithna painted this untitled mural, which can be seen on a street-facing shipping container in front of 8ARM restaurant near Ponce City Market. (Photo by Howard Pousner)

Messages on two new Atlanta murals are clear and forceful: “Stop Asian Hate,” “Black Lives Matter” and “Look Beyond. See Within.” The murals went up in response to the March 16 spa shootings in metro Atlanta that left six people of Asian descent and two others dead.

The Solidarity Mural, just east of the Krog Street tunnel on Wiley Street in Cabbagetown, carries its phrases in large letters. To emphasize the struggles of Asian Americans and African Americans, and the strength in unity, it also features two clasped multicolored hands. Bad Asian ATL, a community organization creating safe spaces for Asians in the South,  sponsored Solidarity with assistance from the Civic Walls Project. At 8ARM café near Ponce City Market, the wary, if resolute, gaze of an Asian woman dominates an untitled mural by Sanithna Phansavanh.

Both murals went up within a week of the shootings.

Sam Newby, lead artist on the Cabbagetown mural, says its direction was set when she met with Bad Asian leaders Tori Bae and Cat Zhang soon after the March violence. They “were telling me what they thought would be the best approach — to be clear, to relay an obvious and concise message,” says Newby, a first-time muralist. “I completely agreed. In such a short amount of time after all that happened, having a concise message was the perfect thing to do, especially for the community in Atlanta.” 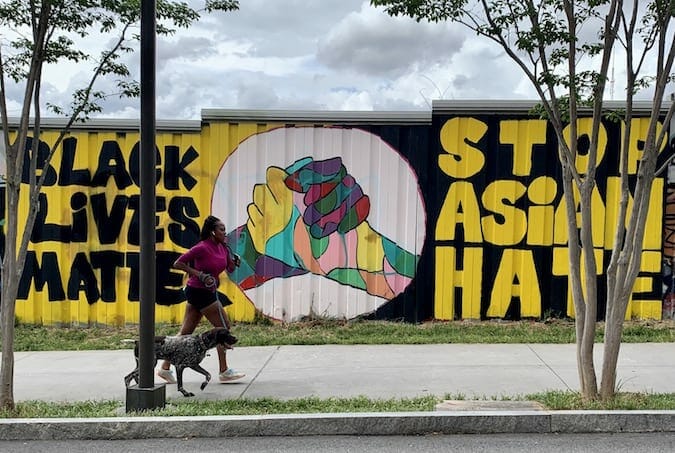 The “Solidarity Mural” is located in Cabbagetown, just east of the Krog Street tunnel on Wiley Street. (Photo by Howard Pousner)

The Sanithna (suh-NEAT-nuh) project began as 8ARM prepared to host a benefit for metro Asian Americans and Pacific Islanders in response to the shootings. Bad Asian ATL members reached out to Living Walls for a mural to be painted on a shipping container facing the street in front of the restaurant.

“The request was to create something that could speak about the situation,” he says. He chose not to sign his creation because he thought it would compete with its purposefully simple design. “The message,” says Sanithna, who was born to parents who fled Communist Laos, “was the most important thing.”

Newby was born on a military base in Seoul to an American soldier-dad and South Korean mom and knows a lot about Asian hate. She and collaborators Crystal Jim Kim and Apple Zhao painted the mural with some 50 volunteers during one 12-hour day. She recalls being so fueled by adrenaline and a tornado of emotions that she couldn’t fully process the murders. Visitors placed memorial flowers at the base of the mural while they painted and told her that seeing the mural take shape was “healing.” When Newby got back in her car, she cried all the way home to Athens.

“Everything hit me at once,” she wrote on her Instagram feed two days later, “and I’d realized how much I’ve desensitized myself — normalizing the microaggressions, the fetishization of Asian women (and men now!!), asking my mom if anyone has done or said anything mean (racist) to her every time I call her, and so much more. How have we been able to hold so much in for so long?” 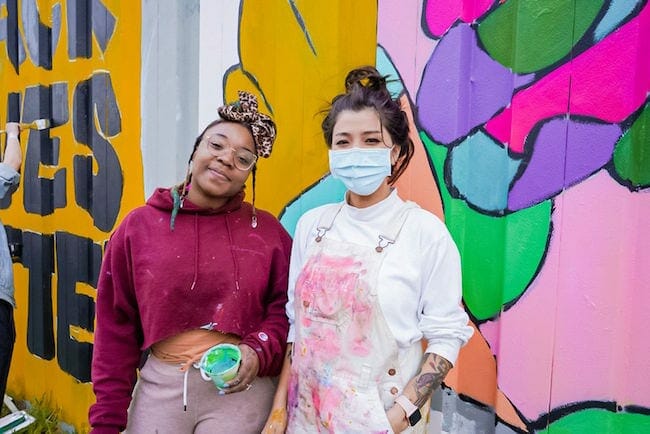 In the quick process of designing the mural, Newby sought feedback from Atlanta artist Dizzy Dain, who’s African American. Dain suggested making the clasping Asian and Black hands multihued. This would add a jolt color to the design and could be read as a nod to diverse Atlantans coming together in a time of crisis.

Dain resists any suggestion that Black and Asian experiences can be equated, however. “This mural was to show that some of our struggles may look similar in how we are mistreated and for that, we stand with each other,” she says. “My experience will never be Sam’s experience, and hers will never be mine. But that doesn’t mean we can’t empathize with each other and support the impact we intend to make together and in our communities.”

He had one weekend to come up with a finished design, first sketching lotus flowers with the words “From the Mud. We Grow Together. Stop Asian Hate.” He drew it in black and white — “the colors that people only seem to care about,” he wrote on Instagram. He then rejected the flora and the text because “the idea required too much cognitive processing.”

That led to a sketch of female eyes “to reflect how people will stereotypically focus on an Asian person’s eyes.”

He had his focal point but says he struggled with the words to accompany it. He “stewed on what phrase to use” until 2 a.m. the day the mural would be painted. Just before he forced himself to sleep, these phrases came to him:

He compressed his message to “Look Beyond. See Within” and paired it with “Stop Asian Hate.” He says the stress of the tight turnaround was trumped by the engaged response of passersby who watched him paint as well as attendees of the AAPI benefit and other feedback that has followed.

Though he and Newby haven’t met, they’ve seen each other’s murals. 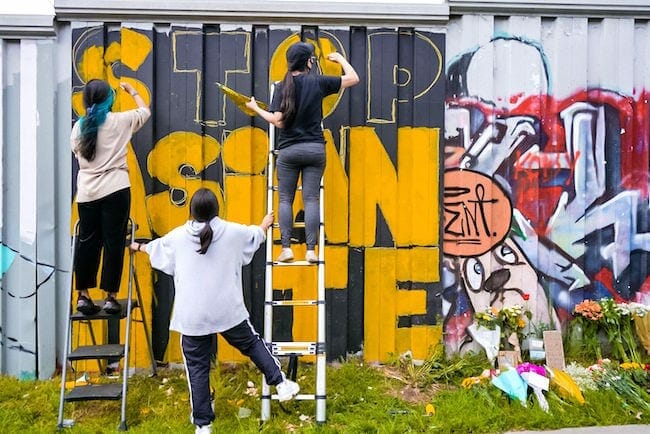 The “Solidarity Mural,” a work in progress. Passersby left flowers and notes in response to the effort and the March spa murders in metro Atlanta. (Photo by Jessica Dynelle)

Newby praises 8ARM for hosting the benefit and presenting the mural at a site that can be seen by thousands every day. “The mural itself is beautiful,” she says, “and I’m grateful to see more art regarding the tragedies of this last year being put up to unify a community.”

Sanithna also refers to art’s meaningful role in building community when he speaks of the Solidarity Mural.

“I love it,” he says. “The power of public art lies in its accessibility, from who can create it to who gets to see it. Messages can be amplified in a more impactful way, because the ideas are shared from the community, for the community and in the community.”

Note: A Fulton County grand jury has indicted accused spa shooter Robert Aaron Long on domestic terror and murder charges in four of the deaths. If he’s convicted, District Attorney Fani Willis says she’ll seek hate-crime charges and the death penalty. More recently, a Cherokee County grand jury indicted Long on four counts each of malice murder and felony murder plus criminal intent to commit murder, aggravated battery, possession of a firearm during the commission of a felony, criminal damage to property in the first degree and 11 counts of aggravated assault. No trial dates have been set.