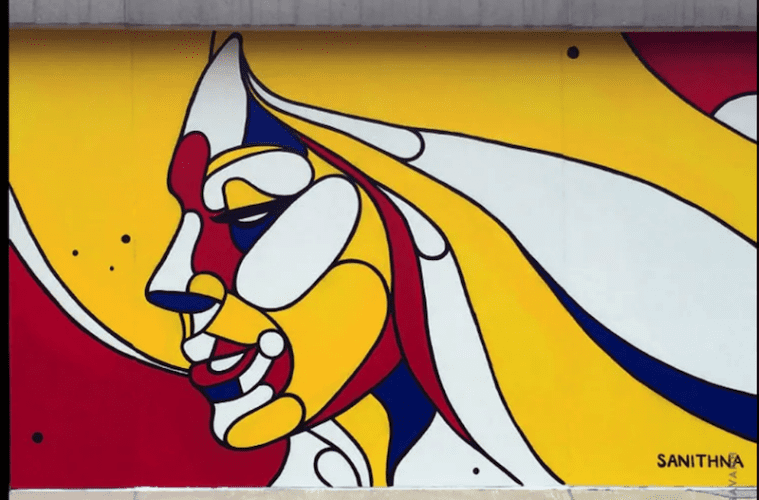 Detail: Sanithna's "The Art of the Modern Life" mural at Colony Square in Midtown. It was Inspired by Piet Mondrian and Roy Lichtenstein, both featured prominently at the High Museum of Art across Peachtree Street.

In 2013, Sanithna Phansavanh promised himself that within five years he’d be a working artist. He had an insatiable impulse to break creative barriers, but the financial risks of a new career path gave him pause.

The artist who goes by “Sanithna,” (pronounced SUH-neat-nuh), was born 40 years ago in Kansas City, Missouri, to parents who fled Communist Laos in the 1970s, eventually immigrating to the United States and moving to Atlanta. The need to pursue higher education and a skilled occupation was instilled in him as a boy. As he moved up professionally, however, he couldn’t quell the incessant voice inside urging him to make art. He listened, sealing his promise in ink with a tattoo of the Roman numeral five. “I have a skill set,” says Sanithna, “that can shed light on social injustices through the lens of art.” (Photo by Brock Scott)

Sanithna’s canvas paintings have been part of Atlanta group exhibitions at Eyedrum and the now-gone Beep Beep and Young Blood galleries. He did his first public artwork for the inaugural Forward Warrior in 2014, a move encouraged by friend and fellow muralist Peter Ferrari. He then began getting commissions from the likes of Red Bull and Colony Square and was invited to take part in events hosted by ABV Gallery and the High Museum of Art.

He’d met his five-year goal by the end of 2018 and felt accomplished but dissatisfied. “It’s interesting when you start commoditizing your passion, it loses some of its magic,” he says. He gave himself permission to recharge and allow space for authentic creativity. “Leaving the world a better place through my artwork has been at the core of my thoughts,” he says. “I want my artistic trajectory to reflect what I’m passionate about, such as ecology and education.”

This year Sanithna used his artwork to encourage people to vote in the presidential election and created a limited-edition print of the late Congressman John Lewis as a “thank you” to Instagram followers who said they’d voted. “I have a skill set that can shed light on social injustices through the lens of art,” he says. “Through artistic exploration, I’m adding more focus and purpose to my work.”

Subtle symbolism is how Sanithna describes his work, which can be illustrative, abstract and impressionistic. His inspirations include books, poetry and photographs of social movements.

He partnered with Living Walls in October on the mural Stronger Together, outside Atlanta Medical Center downtown. It depicts medical workers in shades of purple to honor and show support to front-line workers dealing with COVID-19. He collaborated with the OuterSpace Project (2018) for a mural at Ponce City Market on the Atlanta BeltLine; Living Walls x Buford Highway for Our Lady of Buford Highway, a mural that spotlights the street’s multiculturalism; and ELEVATE Atlanta (2015) for a mural that depicts a woman growing from beneath the Earth (see it on a downtown parking deck at 95 Luckie St. N.W.). He’s also had, or has, murals in East Atlanta, the Old Fourth Ward and West End.