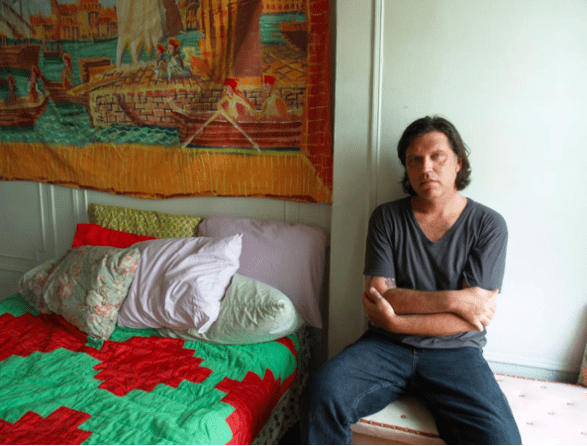 Singer/songwriter (and former Atlantan) Richard Buckner has released his first book of poetry, "Cuttings From the Tangle."

Richard Buckner is a singer-songwriter whose lyrics have been described as abstract, impressionistic and elliptical. The same can be said of his first book of prose poems, Cuttings From the Tangle (Black Sparrow Press, 112 pages), which synthesizes nearly 30 years of observations, perspectives and insights as a musician on the road.

Buckner, a onetime Atlantan who lives in upstate New York, has released 11 albums. His 2000 release, The Hill, featured poems by Edgar Lee Masters from Spoon River Anthology that Buckner set to music.

Before beginning his virtual book tour at A Cappella Books last week — he was owner Frank Reiss’ very first hire in the early 1990s — Buckner talked to ArtsATL about his compulsion to write, his quarantine conundrums and the rise of submissive-aggressive patterns in public debate.

ArtsATL: The epigraph to Cuttings From the Tangle says that your poems were “written to be read aloud.” Why do you want readers to experience the material aurally?

Richard Buckner: The epigraph was a friendly suggestion. The words live in two ways. One, in state, sitting as visual formations, but more importantly, I think, in the other, aloud and alive as they roll against and with each other like drunks leaning on each other as they leave, say, Euclid Avenue Yacht Club or the Clermont Lounge. ArtsATL: What  insights did you gain on your writing while recording the audiobook?

Buckner: That right now recording an audiobook is nearly impossible. That’s why it hasn’t been released yet. With the lockdown, recording studios are mostly off-limits, not to mention the aural reality of a sensitive condenser mic digesting a mask-muffled reading. I have recording equipment at my home that I’ve been using for years for music, but quarantined attempts have failed in my formerly fairly quiet neighborhood, with now-out-of-work upstate rednecks running loose on farting Can-Ams or in car-kit Acuras customized with hamster mufflers.

ArtsATL: Did the compulsion to write your story-like poems feel different from the inspiration that traditionally leads to your songwriting?

Buckner: The compulsion has always been there to write anything, all the time. It’s how I kill my hours. My interest in making music came from my love of recording sounds. Words were a secondary layer of sounds. With this book, the thought and work process was the same, except that the images had more room to roam feral without the restriction of assigned musical sections.

ArtsATL: One of the most common refrains nationwide in 2020 has been, “I just can’t believe . . .” whether in response to the presidential election, the pandemic or gun violence. As a natural observer who has been crisscrossing the country with little more than your guitars and notebooks for nearly 30 years, did anything come as a shock to you in the past year?

Buckner: The book’s contents are exactly as I saw them and nothing has changed. What were then just casual observations from sundry county-road motels, strip-mall parking lots and diner/lounges documenting individual American tics, are now more like pig reports of full-on seizures from a populace that is both submissive and aggressive with public debate.

Our outsider world is internalizing itself inside out like some electronica-driven coma pageant with an after-party gack buffet, cult Kool-Aid open bar and an open mic aphorism contest with a lead trophy given out for best unironic cliché and commercially presented by a hooded news host. One of the pieces in Cuttings From the Tangle, titled “Ghost Parade,” documents two observers watching a cavalcade of individualism, leaving both witnesses “speechless but not surprised.”

(Each month, this column features reading suggestions from those in Atlanta’s literary world. For the holidays, ArtsATL sought guidance from experts in children’s literature — a teacher, an independent bookseller, a grandparent and a mother of two.) And the People Stayed Home by Kitty O’Meara (Tra Publishing, 32 pages) explores quarantine through the lens of healing, growth and unity. O’Meara and her thoughtful illustrators, Stefano Di Cristofaro and Paul Pereda, immediately allow readers to find themselves in the story. They show people (and pets) in different types of families; people of diverse races and religions; and people of many shapes, sizes and ages who contribute to an unexpected sense of togetherness that results from their shared experiences of isolation at home. While O’Meara takes care to acknowledge the grief and pain many have faced, she illuminates the quiet victories of pausing our busy world: We’re learning to listen more purposefully, find beauty in simplicity and honor our planet. We are using the power of our community — whether physically together or apart — to make change.

I can’t wait to read Dasher by Matt Tavares (Candlewick Press, 40 pages) to our 21-month-old granddaughter, Clark. Reading is her very favorite thing to do with her TC (me) and my wife, Michelle “Mimi” LeClair. Dasher tells the story of an adventurous young reindeer who learns that anything is possible when she is being brave. She teaches us that no matter how bad and scary things might be, we still can wish and dream of a better life.

— Tena Clark is a songwriter-producer who has work with Aretha Franklin, Natalie Cole and Maya Angelou. The founder and CEO of the music marketing company DMI Music, Clark is also a civil rights activist, a crusader for women’s rights and author of the memoir Southern Discomfort (Atria Books, 304 pages).

Chana Ewing’s ABCs of Equality (Frances Lincoln Children’s Books, 52 pages) —  A is for Ability, B is for Belief and C is for Class — is a great little starter for introducing social justice language and teaching early on that all people should be celebrated and treated equally. Follow Your Dreams, Little One (LB Kids, 26 pages) by Vashti Harrison is a sweet read that introduces African American trailblazers and a few mantras in bite-sized, simple language. The book features children extending kindness and sets an example for the type of humans we hope to raise.

My other favorite board book this season is Sophie Beer’s Kindness Makes Us Strong (Hardie Grant Egmont, 24 pages).

This chunky trio of books is bursting with fun, beautiful illustrations and messages to match — and the perfect holiday gift for tykes destined to make our world a better place.

— Bunnie Hilliard is the owner of Brave + Kind Bookshop in Decatur. Her interest in children’s literature began when she became a mother.

As a mother of two and an avid reader, I wish for nothing more than for my children’s bedtime story to be something more than just part of our nightly routine. For me, reading is a way to transcend this world, provoke critical thinking or simply learn something new. By carefully curating my children’s library, I’ve come across many beautiful stories — inside and out — that both my children and I are able to cherish. Consider Love (Little Simon, 32 pages) and Yay, You! Moving Up and Moving On (Little Simon, 32 pages) both by Sandra Boynton, are always at the top of our list. My oldest son, who was recently diagnosed with autism, has difficulties understanding the complexity of human emotions. Consider Love, although the story itself has little depth, is a sentimental and innocent take on the curious modes of love. Yay, You! Moving Up and Moving On, although a children’s book, is worth reading by any recent graduate or person going through a dramatic life shift. Short and sweet, the book provides wisdom and inspiration. Both books offer the poetic qualities of rhythm, providing a stress-free, easygoing read.

Library Lion (Candlewick Press, 48 pages) by Michelle Knudsen, with illustrations by Kevin Hawkes — a story that I consider more as a work of art — remains proudly placed on my children’s nightstand. While the book introduces the rules of the library to young readers, it also offers a chance to embrace the unusual. Soft acrylic and pencil drawings fill the pages, providing great detail to the emotions of the people, texture to the lion and accentuate the crisp, clean texture of the books.

— Lauren Leathers is a freelance writer whose coverage of arts and culture has been published by ArtsATL, Atlanta Magazine and NPR.