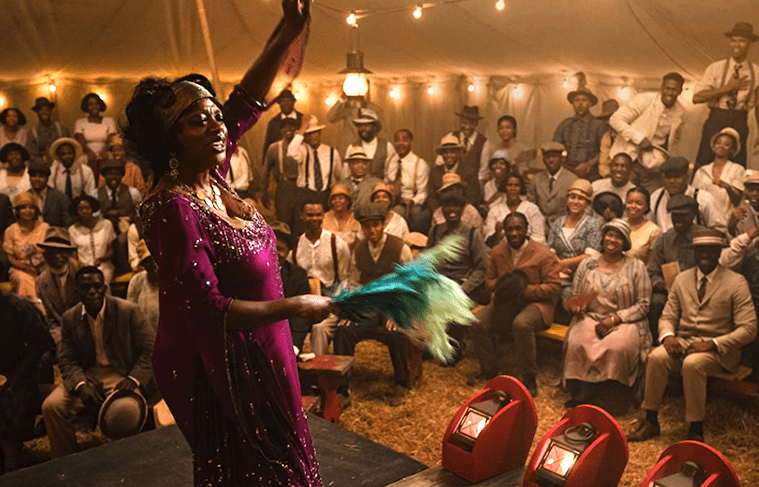 The powerhouse film version of August Wilson’s Ma Rainey’s Black Bottom on gives us two of 2020’s best screen performances. One is simply her latest, the other is his last.

The phenomenal Viola Davis plays the title role, Ma Rainey (born Gertrude Pridgett), Mother of the Blues, born in Columbus, Georgia, and working the Chitlin’ Circuit in the 1920s when we meet her. (Davis won a supporting Oscar for the film of Wilson’s Fences in 2016, though hers was basically a leading role.) The Netflix film, directed by Broadway award winner George C. Wolfe (Take Me Out, Caroline or Change, Topdog/Underdog, etc.), starts with a shrewd fake-out. Two young men run as if for their lives through dusky Georgia woods. We’re primed to expect dogs and angry White men in pursuit. But these guys are running toward something: the sweaty, loud embrace of a torch-lit tent in a forest clearing. Ma Rainey, with a mouthful of gold-capped teeth and a bodacious derriere that gives full weight to the title number, is onstage, grinding through her song list for a happy Black audience.

But White folks like Ma’s music, too. That’s the core of the Wilson drama, the first of his century-spanning 10-play cycle to reach Broadway in 1984. When Kenny Leon was artistic director at the Alliance Theatre, Wilson’s plays were a mainstay — sometimes at the resistance of a then-hidebound subscriber audience but ultimately a step in bringing the Atlanta company national recognition.

Ma Rainey mostly unfolds in a Chicago recording studio; the play is the only one of Wilson’s 10 that isn’t set in his native Pittsburgh. On a hot day, Ma and her four-piece band are there to record a selection of songs for her anxious manager Irvin (Jeremy Shamos) under the eye of producer Sturdyvant (Jonny Coyne), both White men.

The players include bandleader Cutler (Colman Domingo); pianist Toledo (Glynn Turman, in a role that the late Atlanta actor Thomas J. Byrd played in a 2003 Broadway revival); and bass player Slow Drag (Michael Potts). All are accustomed to the peripatetic, subsistence-level of life on the road. They also know how to placate the combustible Ma.

That’s not true of the youngest of the bunch, the trumpeter Levee (Chadwick Boseman, in his final performance). Levee, the spark for this lit-fuse drama, has rearranged the lead-in to the title song. He’s also penned original tunes, hoping they’ll help him form his own band with a jazzier repertoire than what he derides as Ma Rainey’s “jug music.” Chadwick Boseman is Levee, a trumpet player with an agenda all his own. (Photo by David Lee)

Rainey is not the sort of person anyone should be foolish enough to deride. Barely recognizable under a glistening patina of sweat and smudged greasepaint, Davis’ Ma stalks through the film as a demanding nation of one. We watch her, accompanied by girlfriend Dussie Mae (Taylour Paige) and nephew Sylvester (Dusan Brown), as she sashays through her Chicago hotel, glaring balefully at the disapproving, light-skinned African American gentry in the dining room. Black as the night, Ma is an outsider everywhere, nursing stoked coals of lifelong resentment alongside the volatile talent that gives her what power she has in a world of White men.

She has no illusions about fellows like Irvin and Sturdyvant. Their feigned affection ends as soon as the recording session does, “Then it’s just like I’d be some whore and they roll over and put their pants on,” Ma says. Hot and unnerved by a fender bender, Ma enters the studio like a storm front of resentment. At first she tries out different tactics for delaying the session — demanding a nice, cold soda, for example. Ma Rainey is worth watching just to savor the way Davis pronounces “Coca-Cola.”

Her clash with the men in suits is nothing compared to the animosity that looms between her and the cocky upstart Levee, a hound dog and self-promoter par excellence. It’s soon clear that, whether the songs get recorded, the day isn’t going to end well. It’s impossible to imagine who will suffer for the gathering tensions. As in all of Wilson’s dramas, plot is secondary to language. Ma Rainey is a gorgeous rush of storytelling soliloquies, with band members filling us in on their histories on the road and in the Deep South. Toledo, in particular, frets over the general state of Black society. “I’m talking about what all of us gonna do together” to improve the lives of one another, he says.

Levee, in his rush to get ahead, is concerned with no such sociological matters. But we come to know, in a devastating speech about his childhood, what fuels his drive and anger. It’s one of two demanding speeches Boseman delivers. In the second, he curses an uncaring God directly. The knowledge that he delivered this searing confrontation, knowing he might be facing the end of his own life, gives the scene a shattering dimension. I don’t know what Boseman’s relationship was to faith, or even if he had any, in his four–year struggle with colon cancer. But this is, literally, the performance of a lifetime.