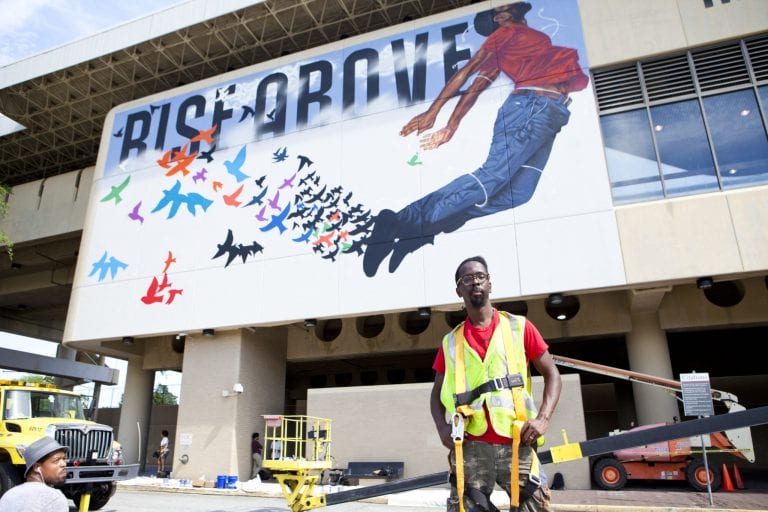 Almost two years ago, WonderRoot approached the artist about taking the creative lead of the organization’s ambitious public arts initiative known as the En Route program. Announced in August 2015, the project came with big names tied to it. WonderRoot partnered with MARTA, Fulton County Arts & Culture, and the TransFormation Alliance.

En Route also came with a $50,000 grant from the National Endowment for the Arts. The goal: “to create meaningful, aesthetically imaginative, high-quality, text-based murals that explore issues of access, mobility and public transportation,” per WonderRoot’s initial mission statement.

The idea: Pecou would paint four large murals at MARTA stations in the city, with input from the nearby communities and their residents. The works would reflect the culture, history and people of the neighborhoods in which they’re located. First stop: King Memorial station.

Yet, none of that is what worried Pecou. His concern was simple: he’d never painted a mural before. “I was really nervous leading up to it,” he says. “As soon as we got up on that crane and made the first mark all of that went away.”

It just goes to show, even a Ph.D. student at Emory University’s Institute of Liberal Arts with work  featured in the Smithsonian’s National Museum of African American History and Culture, the Société Générale  (Paris), the Nasher Museum of Art at Duke University, and the High Museum of Art, amongst other places, can get intimidated sometimes. And it’s his work, often humanizing and celebrating the beauty of the Black male body, that drew WonderRoot in. Pecou’s works fuse themes of Black male masculinity, hip-hop and representation. “When [WonderRoot] approached me about it, one of the things they really made clear to me was that they wanted me to be a part of this project because of the socially charged nature of my work,” Pecou says. “I really took that as an invitation to build off what it is that I do with the communities that these stations are in.”

It was the promised, planned meetings with the local communities that also excited and maybe even humbled Pecou a bit. “I’m very well aware of some of the challenges that organizations like Living Walls has had with putting up public works in communities without really any consciousness or awareness of the communities that they’re in,” he says. “I didn’t want to make the same mistake but also wanted something that also spoke to my own body of work.”

The resulting piece — the first in the series — “Rise Above,” is a marriage of the community’s ideas and Pecou’s own. In those early meetings leading up to the painting of the mural there were plenty of calls for Martin Luther King Jr.’s legacy, if not his very face, to be included in the piece. Community members felt like with the name “King Memorial” the station should show some type of visual representation to match.

“No disrespect, but I didn’t want to do a portrait of Martin Luther King because I feel like oftentimes we lose ourselves in the identity of these icons and heroes, rather than focus on the ideas they put forth,” he says. “We don’t see large public works, images of Black men, unless they’re a kind of icon or celebrity.”

His case was only made stronger by a site visit with the station’s original architects, Aeck Associates. In those conversations, Pecou said that he learned the station was given its name because it represented a hub between the King Historic District and Memorial Drive. The resulting work, completed with an assist from artists Fabian Williams and Joe Dreher, features a Black man in flight. The name, “Rise Above,” incorporates the quote below:

An individual has not started living until he can rise above the narrow confines of his individualistic concerns to the broader concerns of all humanity. – Dr. Martin Luther King Jr.

Like the idea of resisting obstacles holding us back, Pecou wanted “Rise Above” to reflect on the idea of flight, while also giving a nod to his current portfolio. “The King Memorial piece in many ways was about imaging that Black male body, so that people will begin to, as I do in all of my work, begin to think about Black male masculinity differently, so that it’s a resistance campaign designed to change the perception of the Black male body,” he says.

Like any current Atlanta resident, he’s trying to wrap his head around MARTA’s sociocultural and historical implications.

Nothing about Pecou’s first rides on MARTA particularly stood out to him. “My view of MARTA and my view of the city was limited,” he says. What Pecou does remember is being a freshman back in the mid-1990s at the Atlanta College of Art. He was living in dorms behind the High Museum of Art, a stone’s throw from the Arts Center station. Having landed in Atlanta by way of a small town in South Carolina, he was initially in awe of the big city and its public transportation system that had a little over a decade of service to its name.

“I do recall being fascinated with the idea of MARTA when I first got to Atlanta,” he says, adding that he mostly used it to travel to Lindbergh station for groceries or the West End station to transport large canvases back and forth across the Spelman College campus where he was taking classes.

Upon returning to Atlanta from New York in his early 20s, is when Pecou’s MARTA quandary came to mind. He wondered why the service didn’t have more stops, buses and trains, why it paled in comparison to its Northeastern counterparts. So, he did some research, and found more troubling revelations that some might say are still true of Metro Atlanta’s relationship with MARTA today.

“As I began to dig into some of the politics of the city, and the history of the city, you see how the city had this kind of migration of White, upper-middle-class people to the outskirts of the city, and their refusal to allow MARTA to move into those spaces for fear that it will bring negative elements to their communities,” Pecou says, adding that today, we’re seeing the reverse effect take place with talks of MARTA’s expansion.

“Why now as opposed to then?” he wonders. “We see a kind of reverse migration of people from the suburbs back into the city and the pressure that’s being put on MARTA from those people who are moving back into the city to expand. Those kind of things bring up some really interesting questions.”

Chief among those queries, Pecou says: What are the needs of people in the city, and not just the demands of those who just moved there? What about the residents who have been there? What are their needs, demands, questions? How will the city’s services continue to benefit those people? They’re all good questions, ideas and debates that fuel Pecou as he leads MARTA into its latest community outreach attempt.

However, despite its history, Pecou says he is more than honored to be playing a part in MARTA’s push for more community involvement, even if it’s just adding some paint where it ain’t. “I’m happy to be part of that growth as it starts to happen but I think that the community engagement piece is paramount.”

It’s that engagement with the Oakland City community that’s driving the conception of the next mural. Pecou says he’s still developing ideas for that piece, but should lay paint to concrete sometime in mid-October if all the red tape clears by then. He says he’s already encouraged by the discussions he’s having with residents, and how much he’s learned. He’s even thinking about loose ideas for H.E. Holmes, En Route’s third stop. If he walks away from the program experience with anything, it’s that Atlanta won’t grow in the right direction without input from everyone.

“Being someone who is not born and raised here I continue to be impressed by the history of Atlanta,” Pecou says. “It’s not just the history, but what’s happening now in terms of what it means to people who live here, what it means to people outside the of the city, and how we can be an example to other cities around the country. When people unite, we can move mountains.”