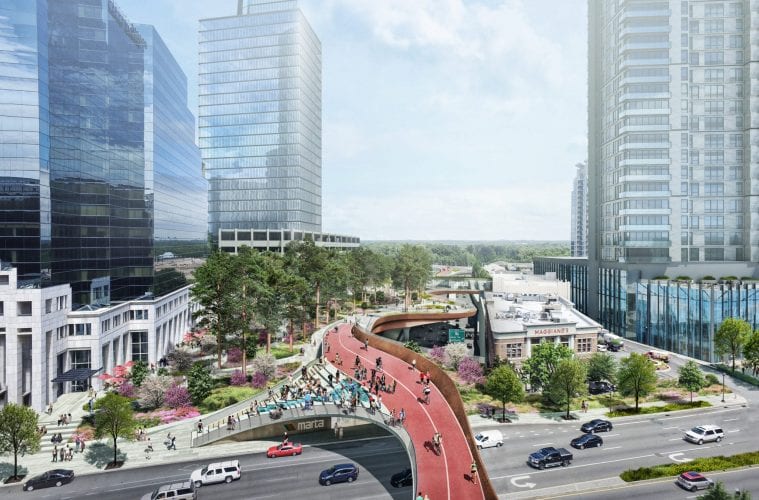 Today, ambitious preliminary designs were revealed by New York’s Rogers Partners Architects + Urban Designers for Buckhead Park Over GA 400. The park will span both GA 400 and MARTA to unify portions of Buckhead that have been separated for decades. The project was presented to the community by Jim Durrett, executive director of the Buckhead Community Improvement District. “We’re very excited to move ahead on this pioneering project. When Buckhead Park Over GA 400 is complete, Atlanta will have a unique, world-class civic space that is both beautiful and functional,” Durrett said in a statement. “We see Buckhead leading a national trend to create value, enhance quality of life, and improve connectivity by constructing inspired public spaces,” said Robert M. Rogers, FAIA, founding partner of Rogers Partners. The park has the potential to act as a model project for other car-oriented cities, like Dallas and Houston. This announcement comes on the heels of the proposal of “The Stitch,” a $300-million proposal to cover the Downtown Connector by building concrete over Interstates 75/85 from the Spring Street flyover southeast to the Piedmont Avenue bridge, resulting in 14 acres of potential green space. Central Atlanta Progress’ 114-page document outlining the vision of that project may be found here.

Buckhead Park Over GA 400, though less extensive, is a project kindred in spirit. The three major design features of the 2,400-foot-long elevated traverse will each offer a different experience for visitors to the park. The north end will be anchored by a commons area, with an “intimate amphitheater” to house both formal and casual gatherings. Halfway along, a plaza will make space for retail and restaurant spaces along with MARTA rail access. The southernmost point will consist of garden spaces. To keep the green spaces vibrant throughout, plans are being made for custom-engineered irrigation systems which will capture storm water. “The park is conceived as an inversion of the highway below – the separator becomes a connector; the absence of public space becomes a center of public life,” says Rogers. ” The park will transform Buckhead into a destination as it will host the premier stop on the MARTA system, and will also be linked to the Path 400 system in the future.”

From afar, Rogers seems optimistic for the transformation of Atlanta into a more pedestrian city. “The development of the BeltLine and regional train system have increased connectivity on a regional level, and local efforts such as the development of Technology Square, sensitivity to building fabric, and increased support to expand and improve the MARTA system will also help improve walkability,” he stated.

In October, after reviewing the feedback from the community, the BCID board will meet about moving forward to the next phase of the project: preliminary engineering, engaging key agency partners, and funding strategies. There is no official timetable or budget estimate for the project at the momement, though future phases of work will explore cost and funding logistics with the input of public outreach and input.