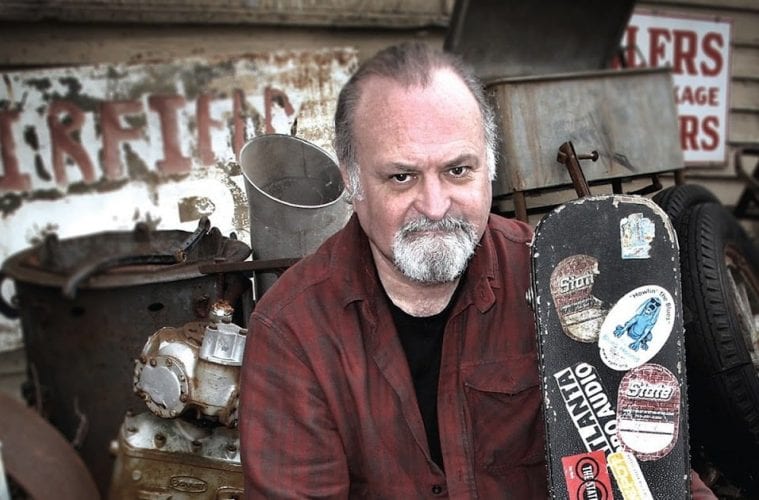 Atlanta blues rocker Tinsley Ellis has a hot new album, Red Clay Soul, that debuted at No. 1 on Living Blues magazine’s radio chart in June and he performs Friday night at the Red Clay Music Foundry in Duluth.

Ellis is a longtime Atlanta fixture who played the blues before playing the blues was cool, and was among the first of the New Generation blues heroes that included Stevie Ray Vaughan, Robert Cray, The Fabulous Thunderbirds, Duke Robillard and Ronnie Earl. Ellis founded The Heartfixers in 1981, and carried that band to regional fame before he broke away for a solo career and signed with Alligator Records, the groundbreaking blues record label. His new album was released on his own label, Heartfixer Music.

Over his 40-year career (which began when he played in a cover band at Six Flags Over Georgia), Ellis has released 19 albums and shared the stage with such luminaries as The Allman Brothers Band, Buddy Guy, Albert Collins and Otis Rush. Rolling Stone has compared his guitar playing to Jeff Beck and Eric Clapton, and Ellis has forged a path as a musician who bridges the blues with rock ‘n’ roll. Ellis (far right) when he had just started out with The Heartfixers.

The first time I saw Ellis perform was in 1983 at the Moonshadow Saloon. He wore outlandishly mod alligator slippers and during one long guitar solo, he strolled through the effusive crowd and walked out the front door into the parking lot without skipping a note (yes, he did eventually come back and return to the stage). Ellis not only helped breathe new life into the music he loved, he served as inspiration to an entire generation of Atlanta blues musicians, many of whom he’s go on to encourage and mentor.

I recently caught up with Ellis to discuss his new album, the importance of giving back and Friday’s show at the Red Clay Music Foundry.

ArtsATL: When you started The Heartfixers in 1981, blues-flavored rock was not hip. Synth rock and punk rock were in vogue, and being a guitar slinger was definitely not cool. You were part of a new generation of musicians who helped bring that kind of music back, including your friend Stevie Ray Vaughan. How tough was it to build an audience, and was there any awareness that you folks were leading a charge?

Tinsley Ellis: We played blues prior to Stevie only because we loved it. There was no one having any real success with it, including us. When Stevie hit big with his Texas Flood album in 1983, it opened the door for many other similar acts to have commercial success. Record labels began to look for acts like Stevie, which is what brought me to the Alligator label. To say that I was the right guy here at the right time would be an understatement.

ArtsATL: During your career, the music industry has turned upside down. You’ve seen recorded music go from record albums to compact discs to digital to streaming. You’ve released albums on a variety of record labels, and now you’re releasing your music independently. What have been the challenges, and the opportunities, from all that change?

Ellis: With all the digital outlets for recorded music, it’s never been better for the listener. The store never closes, and the store never runs out of product. I’m of the opinion that what is best for the listener is also best for the artist. I was warned by Bruce Iglauer [president and founder of Alligator Records] that it would be harder than I thought it would be to have my own label. It’s incredibly time-consuming but very rewarding at the same time. It’s great to put out albums on my timetable rather than on another label’s timetable.

ArtsATL: You’ve been releasing an album a year since you began your own label, and you’ve placed a lot of emphasis on songwriting. Your new album is Red Clay Soul and it’s become one of your most successful. Where did it take you artistically that you couldn’t have gone 10 or 20 years ago?

Ellis: I’ve always been promoted as primarily a guitar soloist. With Red Clay Soul, I wanted to make an album with more soulful grooves as opposed to flashy guitar playing. I went into the recording studio with over 100 original songs to choose from. It was a long, tedious process to decide which ones to record. At one point during the recording process, my co-producer/keyboardist Kevin McKendree blurted out, “Man, this stuff has a seriously Southern sound!” So I came up with the Red Clay Soul album title to convey that vibe.

ArtsATL: You’ve mentored a lot of musicians in Atlanta. What’s the importance of giving back?

Ellis: In roots music apprenticeship is crucial. I was schooled by older cats like Albey Scholl, Preston Hubbard, Bill Sheffield and “Chicago” Bob Nelson. And they didn’t cut me any slack either! I’m so very proud of the guitar players who have passed through my band. Oliver Wood, Rob McNelley, Kenny Kilgore and Mike Lowry all make albums full of great original songs and wonderful performances.

Ellis: We will start the concert electrically, then do some acoustic band and solo songs in the middle before the grand electric finale. I may even tell a joke or two, but don’t let that scare you away. Like Billy Gibbons says, when white people play the blues, it better at least be funny!