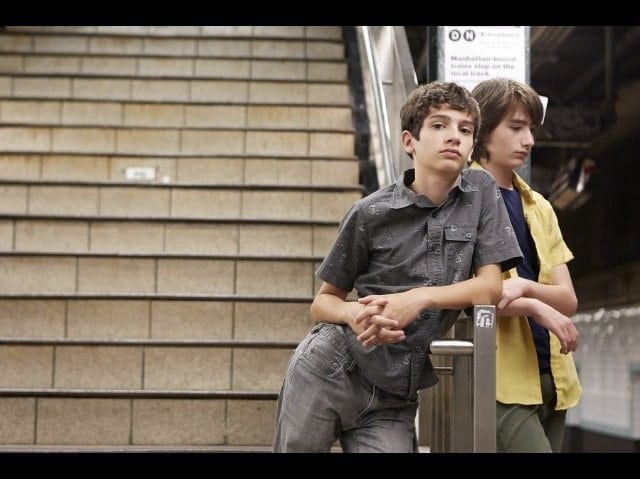 Review: “Little Men” time capsule of youth; “Disappearance” has a wink and a punch

When his actor father Brian (Greg Kinnear) takes a role in a small New York production of The Seagull, 13-year-old Jake (Theo Taplitz) notes that he’s broken a vow to act only in Broadway shows. “You should applaud your father for being adaptable,” Jake’s mom Kathy (Jennifer Ehle) tells him. “That’s what life’s about.”

It’s a statement that echoes through the brisk length of Little Men. We see that the adults’ view of “life” is an ongoing series of strategies and compromises — a worldview that has left behind any appreciation of the strength of the kind of school-age bond Jake has with his new best friend, Tony (Michael Barbieri).

As the movie opens, Brian’s semi-estranged dad has died and with his sister Audrey (Talia Balsam), Brian inherits the old man’s Brooklyn property. It’s got an apartment upstairs and retail space below, now anchored by a small dress shop run by Leonor (Paulina García), a Chilean single mom.

When Brian relocates his family from Manhattan to the Brooklyn place, Jake becomes pals with Leonor’s same-age son Tony. Jake is an arty kid who hopes to draw his way into the fabled LaGuardia High School (the incubator for creative New York kids featured in Fame). Tony is a much looser-limbed teen with one of those great, dems-and-dose Brooklyn accents that lacks any of his mom’s Chilean intonations. At first glance, the boys don’t look like they’d hit it off. But they’re at just the age of deep, young-bro bonding, forming a front against the newly designated enemies: their parents.

You see, Brian’s sister (who has a stake in their dad’s property) points out that Leonor’s rent is way below current Brooklyn storefront rates. They could make many times the amount with a tenant who paid more.

Sensing what’s headed her way, Leonor pulls Brian aside and explains that his father really wanted her to remain on the property after he died. She adds, “I was more his family, if you want to know, than you were.” That may or may not be true, but it’s not a nice thing to say immediately in the wake of a parent’s death. And if Leonor intends to provoke Brian, she succeeds.

Soon, the adults’ internecine cold war is matched by silent treatment from both boys, especially when the parents start curtailing their overnight stays. Nicely, the movie doesn’t make anybody particularly right. Nobody says anything entirely regrettable — though Leonor continues to be a shrewd emotional blackmailer when dealing with Brian. Little by little, it seems the realities of modern economics will trump even the best sort of friendship that Jake and Tony seem to have. (The movie also hints that puberty and divergent sexual drives may drive the boys apart in the future, just as surely as their parents’ war.)

Little Men is a nice little movie, a time capsule of Brooklyn in the early 21st century. The acting is all fine from the adults, and it’s nice to see García (star of Chile’s unsettling 2013 drama Gloria) in an American film. The boys, too, are believable in all their exuberant, teenage gawkiness. I recommend it, but not with the greatest gusto. There’s something strangely antiseptic about the film. It lacks a certain juice or poetry.

The same was true of Ira Sachs’s two previous films — the drug-derailed gay love story of Keep the Lights On and Love Is Strange, the tragedy of two longtime lovers in decline. Sachs gets the feel of New York City of the moment, and he fills it with people who seem like they belong there. But he doesn’t manage to convincingly reveal their hearts or emotions. It’s as if he refuses to give his films that extra dose of artifice that, ironically, would make them seem more real.

Opening next week, on September 9, In Order of Disappearance makes me feel old. Or, at least, maybe I have lived so long in the U.S. that I just don’t find wholesale murders onscreen as funny as I did back in the 1990s, when Quentin Tarantino made the blend of extreme violence and black humor a novelty.

Disappearance is a multi-national take on that subgenre. Set in a Norway buried under deepest winter’s white, it stars Sweden’s Stellan Skarsgård as Nils. A snowplow driver so steadfast, he earns a Citizen of the Year award from his small town at the film’s start. But his cozy, snowy life takes an abrupt turn when his only child, Ingvar, an adult baggage handler at the airport, is discovered dead in Oslo of a drug overdose. Stellan Skarsgård (right) in the black humor of In Order of Disappearance.

Nils insists his son was no druggie. We know he’s right, since we’ve watched some crooks kidnap and jam a syringe into Ingvar, faking an OD. He was mistakenly targeted for stealing one of the many bags of cocaine that are flown through the airport, alternately by Norwegian and Serbian cartels. Nope, that bag was stolen by a friend of Ingvar’s, who confesses to Nils . . . who in turn plans payback by turning into a sort of stoic Charles Bronson. Think Death Wish with a Nordic wink.

That the middle-aged Nils is able to find and physically overwhelm (with his doughy fists) professional thugs half his age is an early indicator that the movie isn’t much interested in believability. (The movie’s title alludes to moments when the screen fades to black and the name of the latest killed character appears; this happens a lot.)

Nils climbs the drug cartel ladder to uncover the chief baddie: a ponytailed dandy named Ole (Pål Sverre Hagen), whose concern over the mysterious, rising death toll among his underlings comes almost as an afterthought to the vicious custody battle he’s waging with his ex-wife over their son. Ole’s life grows more complicated when he assumes the unknown assassin is part of the rival drug runners, and ignites a war with the Serbian cartel. At least this development gives the great actor Bruno Ganz a paycheck as the Godfather-like head of that operation.

In Order of Disappearance is perfectly watchable, ending in a massive shootout excessive and anonymous enough to have been shot by a hack Hollywood director. Which, maybe, director Hans Petter Moland might take as a compliment. The movie is nicely made, nicely acted, nicely shot. It just seems a waste to see foreign actors and filmmakers channeling their talents into imitations of some of Hollywood’s worst instincts. (Yeah, I know:“Shut up already, grandpa.”)

Once the movie establishes its grinning-gruesome MO, one glance at the enormous fan blades at the front of Nils’s snowplow, and you know someone will wind up getting pureed by them. The closest the movie comes to discretion is in saving that inevitable bloody splat until, literally, its last seconds.