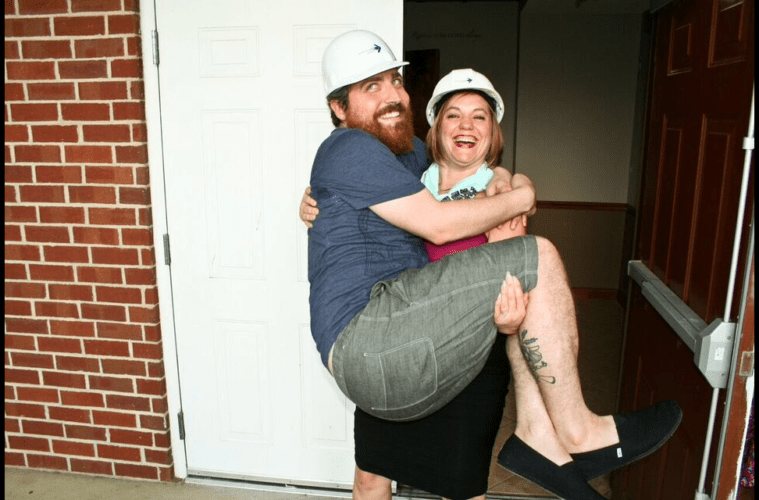 Dad's Garage Managing Director Lara Smith and then-Artistic Director Kevin Gillese were in a jumping-for-joy mood at the prospect of the new home the troupe occupied in 2015. (Photos courtesy Lara Smith)

Lara Smith counts two things as her proudest achievements of her nine years as managing director of Dad’s Garage Theatre Company, the comedy improv theater troupe. The first was securing its forever home, an Old Fourth Ward church it renovated and opened in 2015, after development plans pushed it out of its longtime Inman Park facility. The second has been helping support its artists and staff during the pandemic by raising $50,000 in emergency funds.

“A crisis is where we find out what we’re truly made of,” says Smith, who at 35 is one of the city’s high-profile arts voices, a leader who prides herself in her steadiness in the face of difficult challenges.

As it turns out, both of those achievements played a part in her decision to leave Dad’s Garage earlier this month for a role at Purpose Possible, an Atlanta-based consulting firm that specializes in fund-raising and creating community connections for nonprofits. 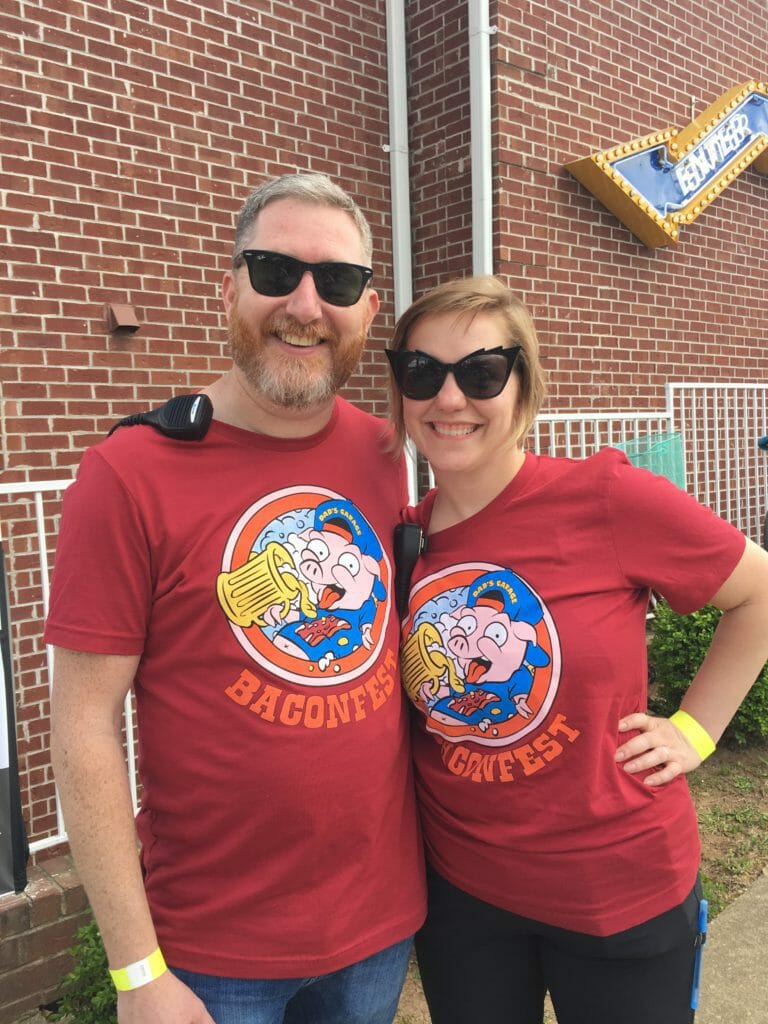 “Dad’s Garage is my artistic, professional home,” says Lara Smith, pictured with her husband Zach Williams during the Baconfest fund-raising event in 2017. “Leaving was not a decision I made lightly.”

A couple of years ago, Dad’s Garage began to have internal conversations about expanding its facilities. Preliminary drawings were done, and pricing put to paper. But then Kevin Gillese stepped down after a decade as artistic director, and expansion conversations that were restarted when his replacement Jon Carr arrived in early 2020 were quickly shelved with the pandemic’s onset.

“So the target kept moving further and further out,” says Smith, who had been thinking about Dad’s Garage succession planning since attending a 2016 cohort titled “Embrace the Future” organized by Community Foundation for Greater Atlanta. The pandemic focused her thoughts even more on her future and that of Dad’s Garage.

The St. Louis area native recently shared thoughts about this time of change.

ArtsATL: What made this summer the time to leave Dad’s Garage?

Smith: I began at Dad’s Garage as development director when I was 21 and left at 24. When I came back as managing director, I was just about to turn 27. I have only spent two years of my adult career elsewhere. Dad’s Garage is my artistic, professional home. Leaving was not a decision I made lightly, and I also realized the longer I stayed, the harder it would be. I remember talking to a friend who said, “If you still aren’t sure if you’re ready to leave, it’s time. The last thing you want to do is wait till you’re certain because then you’ll grow to resent the place.”

When I left Actor’s Express [where she served two years as managing director] in 2012, I did so because I felt like the most risk-averse person in the room, which is not what the organization needed at the time. Similarly, looking at my skills, I have been a leader of crisis and transition for Dad’s Garage, and  it is now in a stabilization and growth phase. I am not the right person to lead the organization through that, and it’s not fair for someone to step into all of my plans. They should have time to prepare and make it their own.

I told the board in October 2020 that it was time to start thinking about the next managing director. The board kicked off a national search in early 2021 and found Stacey Sharer (the former Atlanta executive director of Break Away, a national nonprofit that connects college students with civic engagement opportunities]. I am so thrilled she’s the new managing director and can’t wait to see what greater heights she takes the organization.

ArtsATL: Was the pandemic a factor in deciding that it was time for a change?

Smith: I’d be lying if I said no. It has been an incredibly challenging time to be an arts leader. I had the role at Dad’s Garage for nine years. What happens in positions like that is, you figure out what can go on autopilot, what doesn’t need as much attention, etc. And the amount of things on your plate grows as you learn how to navigate those things. With the pandemic, all of those things that hadn’t needed my attention in years, they needed my attention at that very moment. I think, if anything, the pandemic expedited my exit.

ArtsATL: Do you have plans to stay involved in Dad’s?

Smith: I’m executive producing How to Ruin the Holidays, which is in partnership with Dad’s Garage. We’re already in pre-production for that. Also, last year Dad’s became a polling place, and I remain poll manager for the location. My life is so deeply intertwined with Dad’s Garage, I couldn’t get away if I wanted to! Which I don’t. 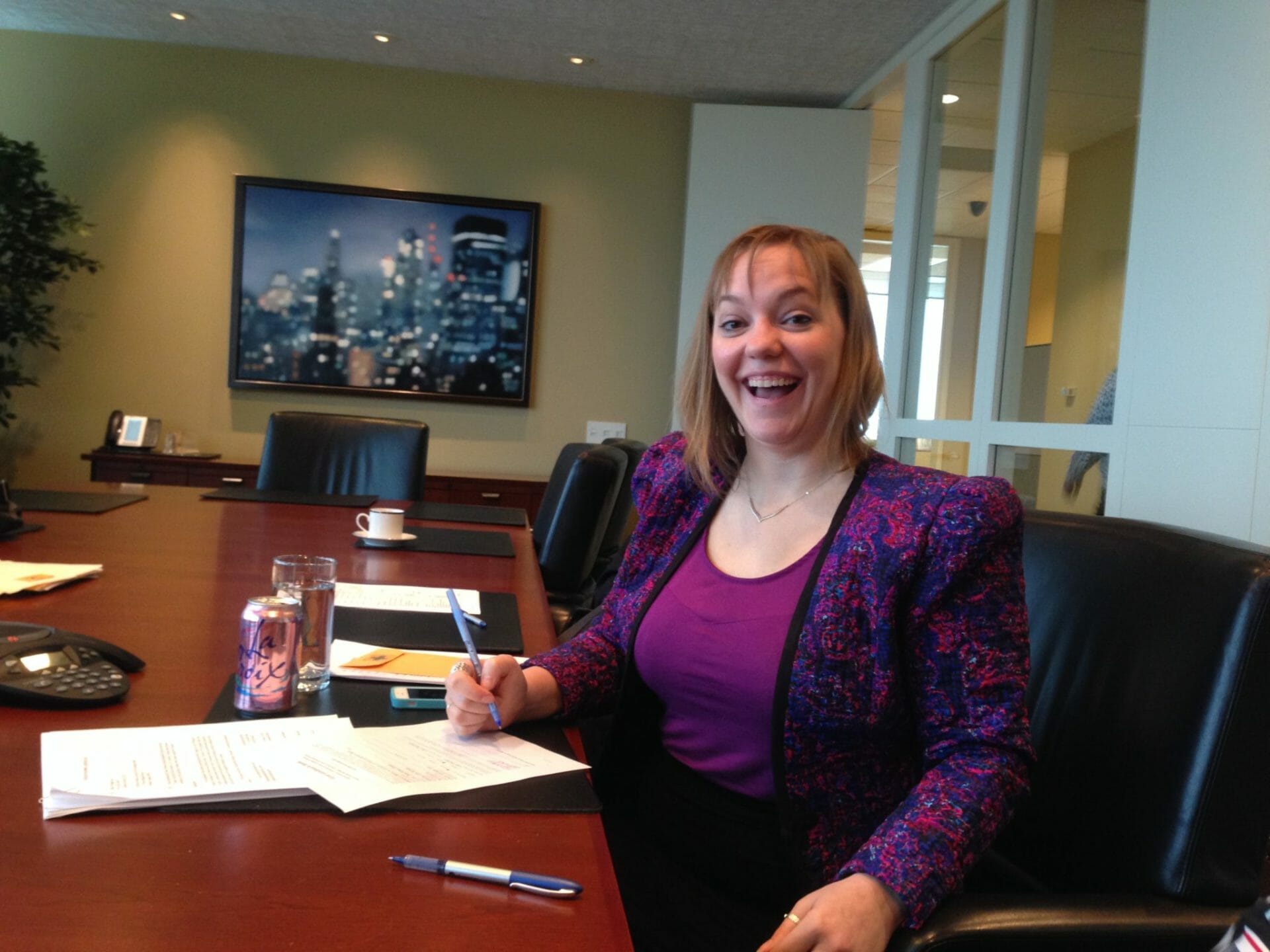 Lara Smith at the closing for Dad’s Garage Theatre Company’s new home. Under Smith’s leadership the theater company was able to buy and renovate a church in the Old Fourth Ward.

ArtsATL: The pandemic period has been such a challenge for Atlanta’s arts organizations. What different challenges do you think they will face when the virus finally lets up?

Smith: I worry for organizations who will go back unchanged. And I would be remiss if I didn’t point out our lack of a service organization for nonprofit arts. We have no one whose job it is to push forward the arts every day. And that means we’re 49th in the nation when it comes to per capita giving at the state level. We have the third largest arts center in the nation, which has the unintended side effect of stymying the growth of our small to mid-sized arts organizations. This is nobody’s fault, but it can be fixed with intentional efforts of a unified voice. One that this community is sorely lacking.

ArtsATL: Can you share about your background, and what led you to Dad’s?

Smith: My mom was a high school drama teacher, and I was in my first play when I was 7. I had been in over 30 shows by the time I was 17, but that’s also the last time I acted. While in high school, I craved power — this is not a joke — and being a stage manager was the best way to get more power.

I went to a theater conservatory, Webster University’s Leigh Gerdine College of Fine Arts, where I graduated with a BFA in Theatrical Stage Management. As part of the program, I had to do an internship. By then, I knew I didn’t want to be a stage manager, so my internship was split between production and administration at the Alliance Theatre. While at the Alliance, the woman I was interning under in administration, Lena Carstens, got the job as managing director at Dad’s Garage. I did some volunteer data entry for the company.

I finished my internship at the Alliance and went back to St. Louis to finish my degree. Then Lena hired me to be the development director right out of undergrad. I started at Dad’s Garage 10 days after I graduated.

I turn 36 later this month, which is crazy because I’ve spent 11 years now running arts organizations. I’m one of the lucky ones who has been able to make a living in the arts. 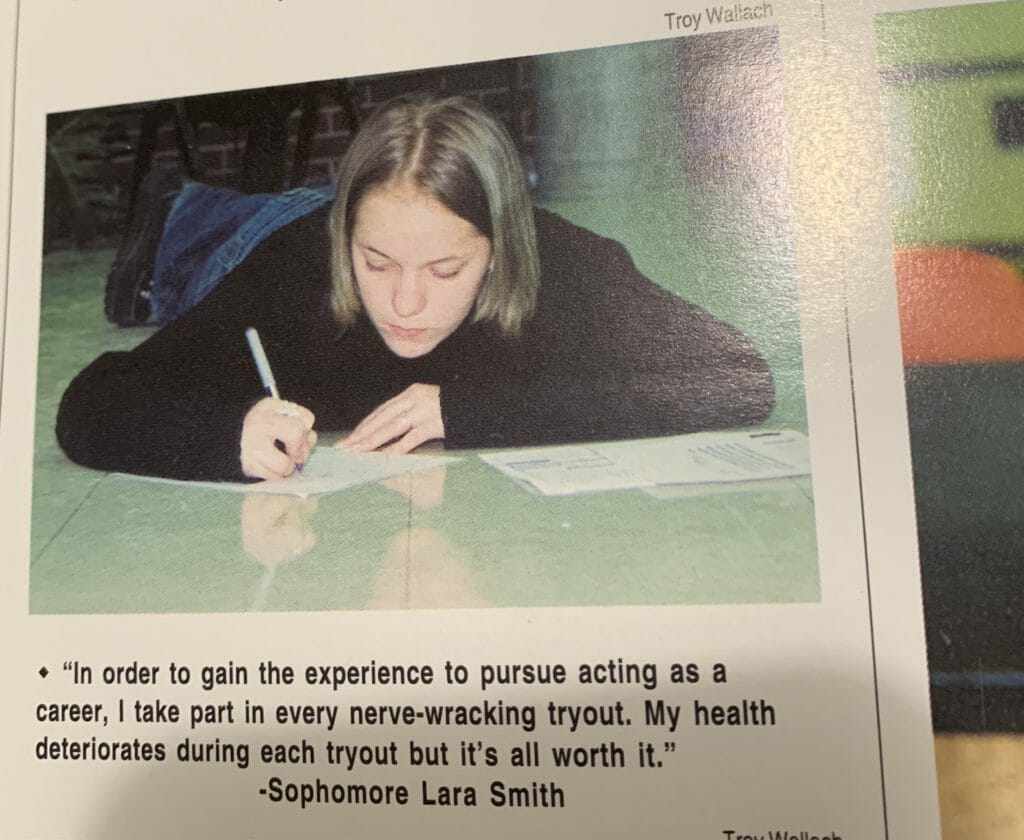 A photo from Lara Smith’s high school yearbook reveals her intense early interest in theater. She grew up in the St. Louis suburbs, the daughter of a high school drama teacher, and appeared in 30 shows by age 17.

ArtsATL: Arts administration jobs can be consuming. Was that a problem for you, and, if so, what did you do to sustain?

Smith: For me, it’s always been about showing up as my whole self, vulnerably and generously. Anytime I’ve really struggled, I haven’t been able to do that or haven’t felt like I’ve been able to do it. I make an active choice to believe everyone is doing their best. If someone — including myself — doesn’t live up to expectations, it’s either because expectations weren’t clear, the environment isn’t supportive, or the person isn’t capable of it. …

ArtsATL: Any advice for other arts administrators who are giving their all?

ArtsATL: Beyond buying tickets, why is it important for people to support the arts?

Smith: There are many studies about the economic impact of the arts, the increases in quality of life, and how engaging in the arts creates more engaged citizens. But the simplest explanation is often the most meaningful: If you don’t support arts organizations, they won’t be here anymore.

ArtsATL: What drew you to your new job at Purpose Possible?

Smith: The ability to work with so many different organizations. I believe it’s my purpose to help people and organizations reach their full potential. With Purpose Possible, I get to do that with groups that serve people experiencing homelessness, arts organizations, people working to end the school-to-prison pipeline, and everything in between. A quarter of my clients are arts organizations, so I work with my people while still expanding into other sectors.

So far, I’ve gotten to do strategic plans, executive director searches, 501c3 formations, and executive coaching. I love, love doing all of those things. The other thing I have really enjoyed is working with all the other consultants — there’s so much different expertise, and we’re all on Slack all day bouncing things off each other. It allows me to be a consultant and still benefit from colleagues. After a collective 12 years working at an improv organization, I like to brainstorm with folks and believe we’re better together than we are apart.