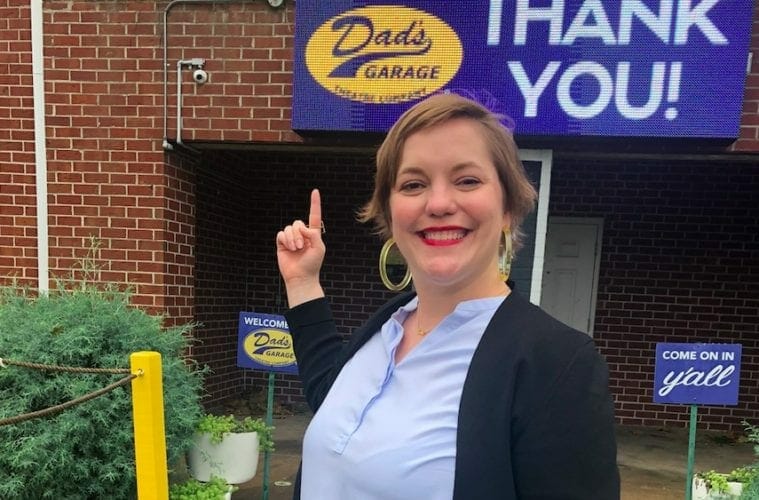 With Lara Smith's leadership, Dad's Garage Theatre Company was able to buy and renovate a church in the Old Fourth Ward. It moved into the 206-seat space in 2015.

Lara Smith, the managing director of Dad’s Garage Theatre Company since 2012 and one of Atlanta’s most visible arts leaders, will leave the job later this year.

The theater has launched a search for a new managing director. Longtime ensemble member Tim Stoltenberg, who moved back to Atlanta for the job, will remain as interim artistic director until Smith’s replacement is found.

Smith notified the theater’s board of directors of her intentions in October. She began at Dad’s as an unpaid intern at 19 and became a paid staff member two years later. “I’ve been working for Dad’s Garage in some capacity on and off since 2007,” she said. “It’s my home.”

Smith said she has contemplated leaving since 2016, but wanted to hit certain milestones before she did. She plans to remain as managing director until after her replacement is hired, probably at the end of the summer or in early fall. She’s not sure what comes next. “It’s hard to line something up when you don’t know exactly when you’re going to depart,” she said. “And, frankly, I need a break. It’s been a challenging year to be running a theater.” Lara Smith said it was time to turn over the helm, and time for her to move on.

Smith is interested in advocacy roles, policy and politics. She may also veer into executive coaching and consulting.

This is a major transition period in the theater’s leadership. Jon Carr left as artistic director in December to join The Second City comedy group as executive producer in Chicago. Carr replaced Kevin Gillese in 2020; Gillese was artistic director for 10 years and remains involved with the troupe as an ensemble member and the director of Dad’s Garage TV.

Smith guided Dad’s Garage from a small and scrappy volunteer-led theater to a professionally run organization with a budget of nearly $2 million. She led a successful fundraising campaign to save the theater in 2014, when Dad’s lost its Inman Park space to development. The theater purchased and renovated an old church in the Old Fourth Ward.

“We’ve been lucky to have Lara at the helm of Dad’s Garage since 2012, and we’re grateful for the lead time she’s given us so we can find the best person for the role,” board chair Derin Dickerson said in a press release.

“Lara is inspiring to work with,” Stoltenberg said in the release. “I’m eager to spend much of 2021 with her and then help her successor step into the role.”

Dad’s Garage was founded in 1995, and produces scripted shows in addition to the improv shows that have gained it a national reputation.

Smith plans to support Dad’s Garage after she steps away. “Dad’s is such a magical place,” she said. “I’ve been really lucky to be at the helm. But it’s time for someone else. And it’s time for me to move on.”