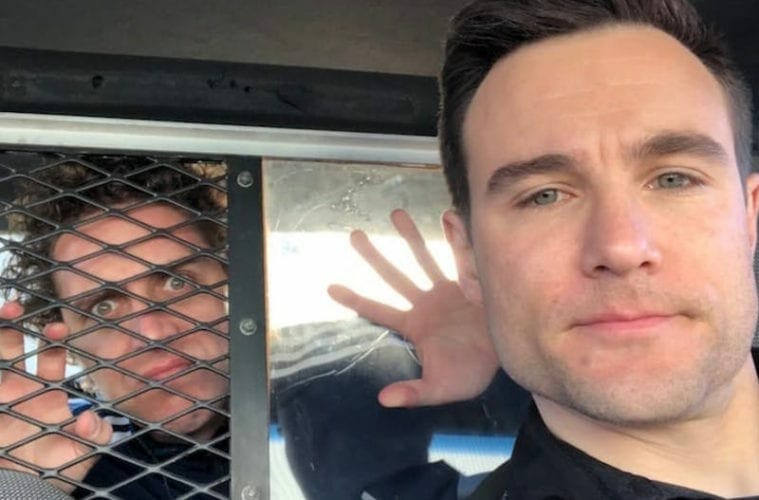 Tim Stoltenberg (left, with Rob Belushi) in a show at The Comedy Bar in Dubuque, Iowa, in February 2020.

“If you’re in the family, they always get you,” Tim Stoltenberg says of Dad’s return

In an unintended game of musical chairs, Dad’s Garage Theatre Company is once again looking for an artistic director.

Jon Carr, who spent less than a year in the job, recently left to lead the Chicago-based Second City companies. He succeeded Kevin Gillese (2010-2020), who left the position but not the company. Enter longtime Dad’s stalwart Tim Stoltenberg, now interim executive director. In an it’s-a-small-world kind of twist, Stoltenberg has worked with The Second City in both Chicago and Hollywood.

“The good thing about Dad’s is that if you’re in the family, like the Mafia, you can’t leave,” he says. “They always get you.” “I am truly honored and excited to work with my family and friends again,” says Tim Stoltenberg, new interim artistic director at Dad’s Garage.

In the early 2000s, Stoltenberg was working at Atlanta’s Academy Theatre and Laughing Matters comedy club, among others, when a colleague suggested he check out Dad’s. Stoltenberg met performers there, took a class and began performing in 2002. He stayed for almost eight years, doing shows and serving as improv director, responsible for working with the ensemble, scheduling shows and improv formats, setting up classes, cultivating new talent, writing original plays and teaching corporate training workshops.

He left Atlanta in 2009 for Chicago, and moved to Los Angeles seven years later, where he did improv and comedy with The Second City Hollywood, played comedy clubs and festivals, and shot several national commercials. Occasionally he’d return to Dad’s.

“I always felt Dad’s had a high standard of not just improv but also performance,” Stoltenberg says. “It was a challenge to up your game. It was always about taking the risk.”

When Stoltenberg heard that The Second City’s was looking for an executive producer, he thought of Carr. Then he heard from a Dad’s board member that Carr had indeed taken the Chicago job. “They asked if I’d be interested in coming aboard with Jon for the time he had left. It was quick, but that is life.”

Stoltenberg rejoined Dad’s on December 15 and had two weeks with Carr to plot the immediate future. He’s done so remotely from his home state of Wisconsin, where he’s been riding out COVID-19, but will soon be back in Atlanta.

It’s impossible to replace Carr, Stoltenberg says. “Jon has been a part of Dad’s for more than 20 years, an integral part. He has been a performer, the marketing director, the artistic director. We will miss having him around, but we are happy he can carry that on at The Second City. The family here is so large that when someone moves on we can celebrate that achievement.”

Chief among Stoltenberg’s tasks is determining what comes next. Dad’s has been putting much of its work on Twitch.tv and, for the holiday season, produced Improvised Made-for-TV-Christmas Movie, a virtual show streamed live with strict safety conditions.

The Dad’s team is planning a 2021 lineup, but Stoltenberg says that running a theater company without live shows or audiences is especially difficult. “There is no playbook, but I think Dad’s has done such a great job of maintaining the relationship with our audience and community. We have put shows online, done classes and had programming for our audiences to watch. It takes a toll on performers, though. All performers want to have that intimate relationship with the audience.” Tim Stoltenberg (left) as a Pilgrim in a bit called “Life Rhymes.”

The Dad’s board has opened a national search for a new permanent artistic director.

“We did not anticipate conducting another search on the heels of the search that identified Jon Carr, but we are excited about his new opportunity,” says board chair Derin Dickerson. “Tim has stepped right in to the interim role and has already proven to be a tremendous asset.”

There seems to be no specific timeline for filling the AD job, especially with the difficulties of interviewing applicants during COVID. Carr began as interim artistic director but was made permanent shortly thereafter. Does Stoltenberg hope for the same kind of kismet?

“I’m determined to do the best in the interim job no matter how long it takes,” he says, adding that it would be a tremendous honor to do the job permanently but that he doesn’t think about that. “My focus is on the present and what I can do to have the most impact while here. Dad’s has always been my artistic home. I am truly honored and excited to work with my family and friends again.”