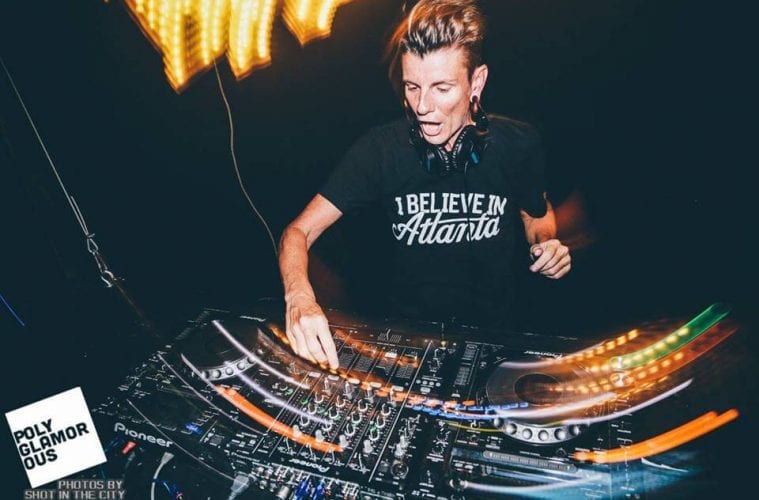 Atlanta as one of the fastest growing cities in the country comes with the price of dramatic disruptions. The city’s queer community is one of many groups subjected to the alarming rise in cost of living and business closures while also burdened by issues of social acceptance, equal rights, discrimination. In the past when queers were not as openly out, they took refuge in the shadow of secular, secretive nightlife. Not bound necessarily by common interests, race or class, the simple ingredient of being queer and needing to be near other queer people has indeed made up much more of Atlanta nightlife since the 1970s than most people realize.

Vicki Powell, a veteran of the queer dance underground, has put in decades of late nights to rise as a popular DJ in Atlanta and beyond. Her radiant and genuinely friendly nature has ensured she is in demand at parties, her welcoming presence coaxing many a crowd out of their reserved shell and onto the dance floor. Combined with an indie house vibe designed to bring people together, no matter their differences, her high energy is exceptional, especially considering the span of her career, which sparked at a very early age. “My very first DJ gig was at a roller skating rink. I spent a lot of time at the rink because I was a competitive speed skater,” Powell explains. “My mother instilled her love of music in me, so naturally, I gravitated to the DJ booth and eventually the resident DJ gave me a shot. Fast forward a few more years, I started sneaking into nightclubs.”

She first starting throwing lesbian parties at Tower Lounge, a tiny building with four pool tables, a dance floor in the back and no windows. “It was the perfect place for day drinking,” she laughs. Experiencing a gritty, almost escapist Southeastern party age in the ’80s and ’90s, queer-friendly bars tripled in numbers compared to today. Hotspots like White Dot, 688, Loretta’s, Metroplex, Club Rio, Velvet and her personal favorite, Weekends (where RuPaul and Lady Bunny frequented), ran 24 hours, 7 days a week. Eventually Tower burnt down and similarly many other small clubs were bought out, torn apart and bulldozed for new development.

The most famous (and consequently notorious), Backstreet, provided Powell her major DJ break before it was targeted by neighborhood conservatives with a strong campaign to shut doors permanently in 2004. Mentoring under Brett Long, who taught her not just about the rules behind the booth but about life and friendship, the connections made and lessons learned cemented Powell’s passion to find spaces to create kinship through events.

After Powell returned from a short stint in NYC, she established Flux, a name associated with one of the biggest and best-mixed parties long before the art walk and block party in Castleberry Hills. The seven years in which Flux reigned solidified Powell’s place in the Atlanta DJ community. By the time she started her residency at the ever-cheeky Church Bar, Powell’s Easter Sunday events were graced with automatic success. Packing out the Edgewood patio in a sea of sweaty souls, the name Vicki Powell on any bill continues to bring a large crowd of both old friends and new patrons. Used to the ever-changing landscape of a city cruxed by growing pains, Powell’s nomadic nature has tremendously aided her navigation in curating fresh parties unbound by trends. Reinvention alone has made her a mainstay and a much-loved, long-respected personality in ATL, and not without reason. Though she’s DJ’ed with famous entertainers in enormous entertainment-centric cities, names and gigs alone aren’t what makes Powell popular. Heralding a huge following within the gay community that contends with larger cities, Powell’s adaptation and passion has ensured room for queer nightlife regardless of Atlanta’s limitations, important to those who thrive on being able to mingle and let loose in safe spaces created by trustworthy individuals like Powell. As a very obvious choice for Atlanta Pride, Powell has announced many exciting events for the upcoming weekend. The pièce de résistance is Saturday’s Deep South: Pride at Music Room, amping an all-female lineup with an array of various points on the globe. Detroit’s DJ Minx will be headlining; Doc Sleep is a co-owner of Jacktone Records; and LUZ, based out of Berlin, is the founder of queer-femme collective Room 4 Resistance, focused on creating dialogue dedicated to the diversity of queer identities in a forward fashion. Last but not least is Detroit-born Atlanta resident Ash Lauryn, part of the Deep South team and a rising talent in ATL. Having only DJ’ed publicly for a year now, Lauryn holds a bimonthly event called Expressions at Sound Table in addition to running a blog called Underground and Black, discussing her experiences as they relate to identity and dance music.

Powell has an amazing sense of who to put on a bill, and each Pride event will include her or someone from the Deep South collective. Kicking off on Friday the 13th with Mary’s Latin Discoteca, DJ Esme of La Choloteca will be joined by Brian Rojas, the newest addition to the Deep South team. Venezuelan-born queer-identified Rojas intentionally linked up with Powell to expand his skills and connect with community. “About 7 or 8 months ago I downloaded DJ software on my computer but it felt like something was missing, so I approached Vicki Powell, presented my vision and musical interests, and she agreed to mentor me properly through the process of becoming a DJ,” Rojas explains. “I love searching for, discovering, and incorporating Latin and tropical sounds, beats, and rhythms into the music I want to present and try to stay true to my roots.”

Rojas will also be alongside Powell and her partner, Chelsea Starr, who hails from the West Coast, to bring extra action to Pride’s Sunday festivities at Henry’s Parade Viewing Party. Deep South DJ Robert Ansley will be spinning after hours TBA with San Fran’s Jordee on Saturday and again on Sunday with two other popular San Fran DJs, Kevin O’Connor and Rich King. The ultimate Sunday Service Pride edition will feature the amazing Ree de la Vega, Starr and Powell for another all-female lineup.

Powell’s skills in selects and mixes exceed surely, but the effortlessness in which she coaxes an entire crowd to let loose, dance and immerse in the groove is what makes her an exceptional artist. It’s appropriate that she has a “Groove is in the Heart” tattoo. Beyond a slight reference to the gay heyday of ‘90s Deee-lite, Powell’s dedication to raising energy for those in need of cathartic joy has created a career where genuine love is exchanged between entertainer and audience. “I really wanted to help create a thoughtful dance space – free from racism, homophobia, transphobia, xenophobia and misogyny,” she tells me. “There is so much work to be done here. Atlanta can always do better! It feels more important now more than ever with our current administration and their attacks on our community.” She provides more than music; Powell is a resource that the community continues to return to, attracted by the release and renewal experienced at her events. Afterall, Vicki Powell has a kind of magic energy, a fire, that draws crowds near. Over the years as surroundings and situations shift for Atlanta’s gayborhood, we find solace in spaces where we feel free, at one, in rare states where we can be present in joy. Thank you, Vicki, for providing a little bit of hearth wherever you go.