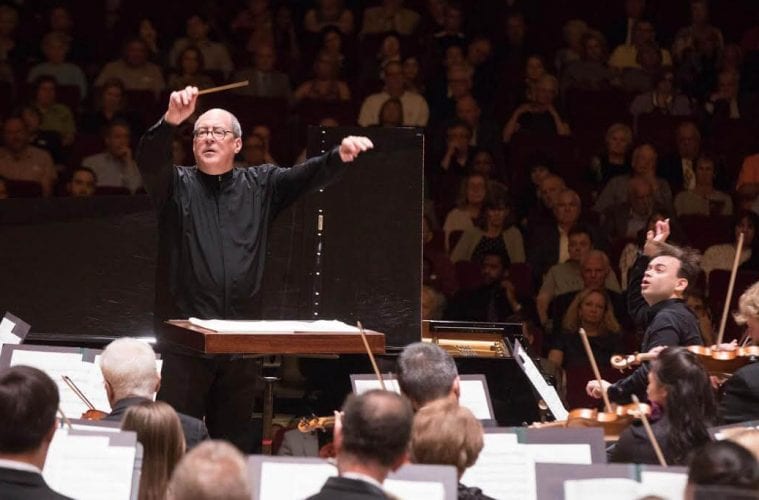 Boston-based composer Michael Gandolfi has been a core member of the “Atlanta School of Composers” — that handful of composers championed by Robert Spano in repeated commissions and performances over the years. Among them is what might easily be called Gandolfi’s magnum opus: “The Garden of Cosmic Speculation,” which Spano and the ASO performed in 2007 and subsequently recorded and released on the Telarc label, in what was at the time the work’s complete form.

Gandolfi had always intended it to be a continuously evolving work, with the intent of adding something new every few years, but it took an unexpected nine years before he was able to return to it, composing “The Cosmic Garden in Bloom” for last year’s Grant Park festival in Chicago, and again this year for the world premiere of the work, which opened Thursday’s concert, “Gardens Feed Also the Soul.”

Like the other parts of Gandolfi’s “The Garden of Cosmic Speculation,” this two-part installment was inspired by the eponymous sculpture garden created by landscape architect Charles Jencks at his home near Dumfries in Scotland, a magnificent conflation of theoretical physics, architecture and landscaping into a fascinating artistic whole.

“Gardens Feed Also the Soul” opened with “The Bone Garden (…of death and rebirth…).” It begins with the quietly ominous sound of a wind machine and bamboo wind chimes, evoking a graveyard atmosphere to reveal a kind of “cosmic mystery” chord that appears elsewhere in the 2007 “The Garden of Cosmic Speculation.” It sets the stage for a kind of overt percussive bone-rattling over a rhythmically pulsing theme, a chaconne that grows from almost a whisper to a forceful climax — much in the manner of Maurcie Ravel’s “Bolero” — but rising in pitch with each iteration until it has eventually become transposed by an octave at its emotional height.

The chaconne‘s harmonic progression itself feels somewhat “downward” in its movement (symbolic of “death”) while actually moving upward in tonality (symbolic of “life”). After reaching its climax, the piece winds back down, ending softly with the sounds of wind, bones and Gandolfi’s “cosmic mystery” chord, but heard at a half step higher than at the beginning — which one might suggest is a statement favoring a quiet triumph of life over death in the cosmos.

The second part, entitled “The Scottish Worthies: Part 1,” is a gallery of brief portraits. It is intended to capture the spirit of a portion of Jencks’ garden that is devoted to honoring great figures of the Scottish Enlightenment: Francis Hutcheson, Robert Adam, James Hutton, Thomas Telford, James Watt and Joanna Baillie. It opens with a pastorale that is evocative of the Scottish countryside in its unabashed melodic forthrightness. While Gandolfi had originally planned to incorporate all of the historical figures so honored in this one essay, he decided it would have made the single movement far too long, so his plan is now to compose two more in order to eventually represent them all. 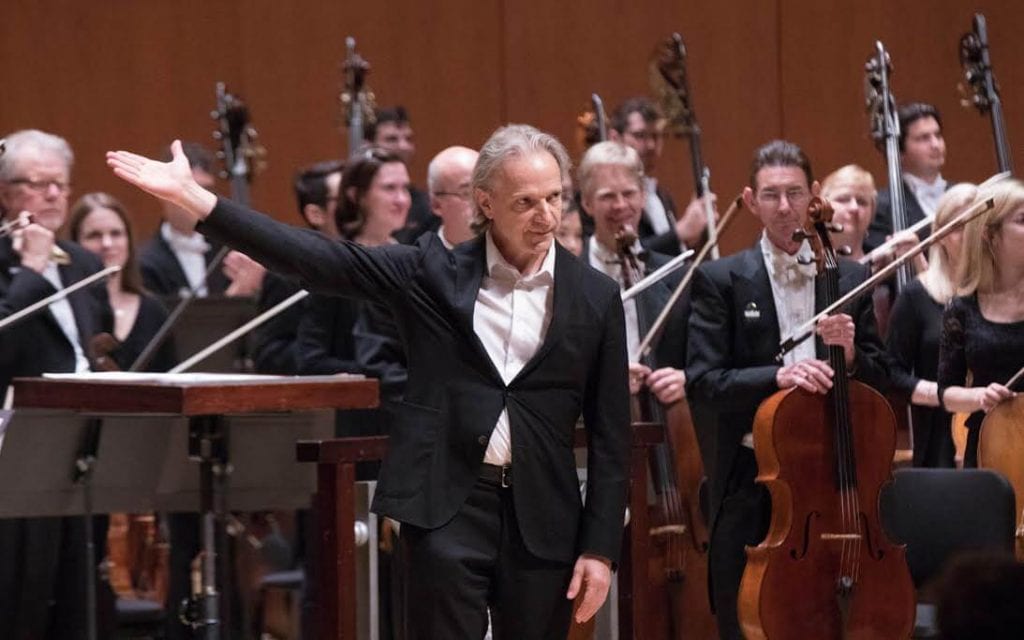 Composer Michael Gandolfi acknowledges the orchestra after the world premiere of “Gardens Feed Also the Soul.”

What is most striking about “Gardens Feed Also the Soul” in comparison to “The Garden of Cosmic Speculation” as recorded by the ASO is perhaps a matter of Gandolfi’s personal and compositional evolution in the decade between. These new movements seem less concerned with the subjects of quantum physics and mathematics per se but feel more human and humanist in their meta-musical scope and musical realizations — totally attractive extensions to Gandolfi’s continued musical exploration of Jencks’ fascinating garden.

Pianist Dejan Lazić has developed a good working relationship with Spano over the last seven years. He first performed with Spano and the ASO in the summer of 2010, playing Beethoven’s Piano Concerto No. 5 (“Emperor”) at the Verizon Amphitheatre, then returned in 2012 to play it again with Spano and the orchestra at a subscription concert at Symphony Hall. At the time of the Verizon concert, Lazić introduced Spano to a project he’d been working on, a transcription of Brahms’ Violin Concerto, which Spano liked enough that Lazić would return to perform and record it with Spano and the ASO as a kind of “Piano Concerto No. 3” — a live recording released as a hybrid SACD by Sony Music Canada, paired with four of Brahms’ solo piano works.

For Thursday’s concert, Lazić brought to the table one of his original compositions: Concerto in Istrian Style, for Piano and Orchestra, a work he premiered at the 2014 Aspen Music Festival, with Spano conducting the Aspen Festival Orchestra. There is a long, grand tradition of composers writing concertos for themselves as soloist — from Mozart to Rachmaninoff in the realm of piano concerti alone. But it’s a practice that seemed to fall by the wayside, almost disappearing from major concert stages in the latter part of the 20th century as composers became more “specialized,” shrinking from view to solitude — with a few exceptions, of course. So it is refreshing to hear, in the present day, a large work with orchestra that serves as a medium for a composer’s prodigious abilities as a pianist.

Like Beethoven’s “Emperor” Concerto, Lazić’s piano concerto is not a work that relegates the orchestra to a background role. That is so much the case that the piano part, for large portions of the work, is fully integrated into the overall texture of the orchestra. On the one hand, that can obscure the sheer virtuosity that’s going on in the solo part, which is observably considerable when one has a clear view of the keyboard and pianist’s hands, as I did on this occasion. But at the same time, the integration was much more musically interesting than merely accompanied pyrotechnics. Yet the work does afford sufficient opportunity for moments when the piano is front and center without the full weight of the orchestra behind it — most notably the solo cadenza, which serves as the third movement, in which both temporal flexibility and emotional range abound.

Lazić’s concerto has five movements in all, when it feels like it would be satisfactorily over and done at the end of the fourth movement. The brief finale that is the fifth movement feels like an addendum of sorts — a kind of grand, full-bodied encore, fine in its own right, but unnecessary for a sense of completeness.

For all that, it is an effective and personal vehicle for Lazić’s pianistic abilities, complemented by what seems to be Spano’s enthusiastic engagement with the work. What remains to be seen is the litmus test of the work’s fate: how many other pianists take up the work besides Lazić himself. That will have to be left for future history to decide. For now, we have the enjoyment of hearing creator as recreator, and that’s a good thing in itself.

Sergei Rachmaninoff’s Symphony No. 3, which made up the second half of the program, received a full-bodied rendering by Spano and the ASO that was emotionally moving and satisfying, a well-played complement to the concert’s first half.