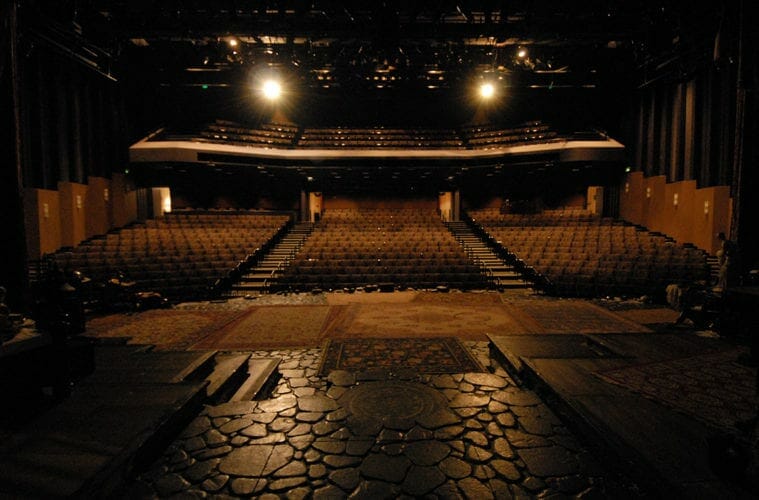 Multiple venues across the city are going dark in the wake of the global pandemic coronavirus.

The unprecedented wave of postponements and cancellations of Atlanta arts events due to the coronavirus (COVID-19) pandemic continues to grow.

The Alliance Theatre has suspended all remaining performances in its 2019–20 season. The theater has video-recorded its family-friendly production Naked Mole Rat Gets Dressed: The Rock Experience and is exploring options to stream it to audiences.

The Atlanta Opera has canceled the final two performances of Gershwin’s Porgy and Bess, scheduled for tonight (March 13) and Sunday at the Cobb Energy Performing Arts Centre. The opera performed the show to critical acclaim last weekend and Tuesday. “Importantly, the company will pay the cast, chorus, crew and orchestra responsible for preparing and performing Porgy and Bess for the entire run,” the opera said in a press release. “All told, more than 200 people worked onstage, in the orchestra pit or behind the scenes to deliver this production.”

The Atlanta Symphony Orchestra has canceled or postponed all Symphony Hall events through March 22, including the March 19 and March 21 ASO concerts with André Watts. “Given the fluidity of events and the rapidly changing landscape, the ASO has elected to postpone or cancel all Symphony Hall performances and public-facing activities through March 22,” the symphony said in a press release. “We appreciate the outpouring of support from the Atlanta community as we navigate this unchartered territory.”

The ASO has also postponed its “Around the A — Listen: Works by Women” at Emory Unviersity’s Schwartz Center for the Arts on March 17, and postponed the Ben Folds with the ASO concert on June 26–27 until November 22–23.

The High Museum of Art announced late Thursday that it is closed to the public. “This decision is being made out of an abundance of caution and based upon the guidance of the CDC [Centers for Disease Control and Prevention] regarding ‘social distancing’ and the elimination of large gatherings,” the museum said in a press release. There is no timetable for when the city’s landmark museum will reopen.

The Alliance said in a press release that it hopes to reprogram some of the canceled shows for the 2020–21 season. One upcoming production, 53% Of, is in rehearsal and may be recorded and streamed. The Steph Del Rosso’s drama is the 2019–20 winner of the prestigious Alliance/Kendeda Graduate Playwriting Competition. This year, for the first time, the Alliance had planned to bundle its Kendeda runners-up and the winners of its Reiser Atlanta Artists Lab in a weeklong Festival of New Work. That event has been shelved, too.

The Alliance Theatre Education Department will continue to provide spring break camps as long as its campus is open,” the press release said. Camp sizes will be capped at 20 people and already stringent hygiene practices will increase to ensure instructors are healthy while providing a safe space for students to gather.

A GoFundMe Atlanta Artists Emergency Fund campaign was started by theatrical designer Rob Brooksher to raise money for Atlanta artists who’ll be impacted by the cancellations. “Most theater artists live on a paycheck-to-paycheck, gig-to-gig basis, and have to supplement their art with a second and oftentimes third part-time job,” the campaign says. “Many of these artists will soon find themselves out of work. To many ATL artists, this will be a devastating financial blow.”

The cancellations also may stress small theaters and arts organizations financially. Some social-media campaigns have asked patrons not to seek refunds for canceled shows and to consider that money a donation.

The number of Atlanta institutions that have decided to close, postpone or cancel performances since the World Health Organization labeled the virus a global pandemic continues to grow.

The temporary closings include:

— Actor’s Express plans to continue with performances of Oscar winner Tarell Alvin McCraney’s The Brothers Size but will limit audience to 100 people or less. “We believe the reduced capacity will allow for social distancing within our space,” the theater said in a press release. The company has canceled its event to announce the 2020–21 season and is planning to livestream it instead.

— Arts at Emory has canceled two events: the Emory Chamber Music Society performance of Beethoven 2020 at the Carlos Museum on March 20, and the March 19 reading by Jim Grimsley in the Cox Hall Ballroom.– Atlanta Contemporary has temporarily closed to the public.

— Atlanta Ballet has canceled this weekend’s performance of Giselle at Cobb Energy Performing Arts Centre. The company hopes to reschedule the performance. “While this is disappointing and presents serious challenges for our organization, our priority remains the health and safety of our patrons, supporters, artists, students, parents and staff,” Atlanta Ballet posted on its website. “We want our valued patrons to have the chance to experience what is truly a magnificent production, so we are working to move Giselle to a later date.”

— An Atlanta Chamber Players peformance at Ahavath Achim Synagogue on March 15 was canceled; the group hopes to reschedule the show.

— The Atlanta History Center and the Margaret Mitchell House will be closed through the end of March. “The institution will reassess reopening all facilities at the beginning of April if judged to be responsible based on guidelines from public health officials,” the center said in a press release.

— The Atlanta Music Project has suspended all its classes and concerts. That includes Saturday’s After School Orchestra Winter Concert, the AMPlify Kindezi joint concert with Clayton State March 19 and the AMPlify Kindezi Spring Concert on March 25.

— The Atlanta Women’s Chorus has postponed its March 20–21 performances of “She Rises.” “Out of an abundance of caution, we are taking these measures to protect the health of our patrons, our members and our staff,” Eve Campbell, executive director of Voices of Note — the parent organization of the Atlanta Women’s Chorus — said in a press release. “We regret that our audiences will not be able to see ‘She Rises,’ a show which our members and staff have worked hard to prepare.”

— The Carlos Museum at Emory University is open, but its docent-led tours are canceled through the end of May, and its public programs in that time frame are either canceled or postponed.

— City Springs Theatre Company has canceled all remaining performances of A Gentleman’s Guide to Love and Murder. “The decision to cancel performances is not an easy one, as dozens of local actors, musicians, technicians and support staff rely on City Springs Theatre Company in making their living. Our hearts go out to them and to all who are affected by these uncertain times.”

— The Cobb Energy Performing Arts Centre will be shuttered at least through March 31.

— The Core Dance performance of Manifolds ATL scheduled for Friday and Saturday outdoors at Agnes Scott College is postponed.

— Dad’s Garage Theatre Company has replaced its annual Big Stupid Parking Lot Carnival fundraiser on March 28 with the Big Stupid Silent Auction & Fundraiser starting March 25, a silent auction entirely online. In addition, Dad’s Garage Social-Distancing Spectacular” began livestreaming live shows Sunday, March 15. Tune in at Twitch.tv/dadsgarage.com. The fundraiser will move to the summer and, at 5 p.m. each Wednesday, Dad’s will decide if that weekend’s shows will go on. If they do, attendance will be capped at 100 people.

— The Fox Theatre announced Saturday night that it will go dark for at least two weeks. The shuttering will affect several shows: Miss Saigon, the AllStar Legends of Hip-Hop, Bill Maher and the theater’s tours. As of now, the upcoming Broadway in Atlanta performances — including Hamilton in April — are still scheduled to go forward.

— The Ferst Center for the Arts will close at least through March 30. It will postpone or cancel the Dance Canvas performances on March 20–21, the Banff Center Mountain Film Festival, the enra: Dreams show and Whose Live Anyway presented by Martin Media.

— Georgia Ballet in Marietta has canceled its spring production of Coppelia, scheduled for March 19–22 at the Jennie T. Anderson Theatre. Instead, the ballet will present two in-studio performances, with limited seating, of the piece for existing ticket holders at 6:30 p.m. March 21 and 5:30 p.m. March 22. Patrons interested in attending can call Georgia Ballet at 770-528-0881 to reserve a seat. Coppelia will be rescheduled to open the company’s 2020–21 season.

— The Georgia Symphony Orchestra has postponed its 13th annual Celebrity Luncheon from March 21 to June 20. The April 4 “Walk Together Children” concert is postponed.

— Living Walls has postponed its March 23 10th anniversary fundraiser. “We will announce the date as soon as we feel we can hold a safe gathering,” the organization said in an email blast. “We are going to try and stay positive and continue to take all the necessary measures needed and hope the spread of COVID-19 is controlled.”

— MOCA GA has postponed its March 21 gala. “In the interest of protecting our patrons, artists, volunteers and staff, we have decided to postpone the MOCA GA gala to a later date,” the institution said in a statement on its website. “If you have joined the host committee or purchased a ticket, we will happily transfer your commitment to the new date. If you cannot attend the event on its rescheduled date, we will return your commitment. As an institution that holds significant public trust, we must show sensitivity to this health emergency.”

— The Museum of Design Atlanta (MODA) will be closed until at least March 27. “All programming will be rescheduled,” the museum said in a press release. “At the end of the two-week period, we will reevaluate based on updates and best practices from the CDC.”

— Violinist André Rieu has postponed the remainder of his tour, including a stop at State Farm Arena.

— Spivey Hall will be closed until at least March 29. The impacted shows include Mary Bevan and Joseph Middleton today, the March 21 performance by George Hinchliffe’s Ukulele Orchestra of Great Britain, and the Southern Crescent Chorale on March 28.

— Stage Door Players has postponed its opening date of The Outsider by two weeks, until April 2.

— Theatrical Outfit has vowed to remain open, but has canceled all education programs and postponed its Luckie Stars Gala. Performances of Pulitzer Prize-winning playwright Paula Vogel’s Indecent will continue, but seating will go from reserved to general admission and the audience will be limited to less than 100 to allow for social distancing.

— Variety Playhouse has suspended all concerts at least through March 31. The venue hopes to reschedule as many of those shows as possible.

Other institutions said they are monitoring the situation closely and will follow guidance from the CDC and local officials. They note that the CDC has said the immediate health risk from the virus is considered low.