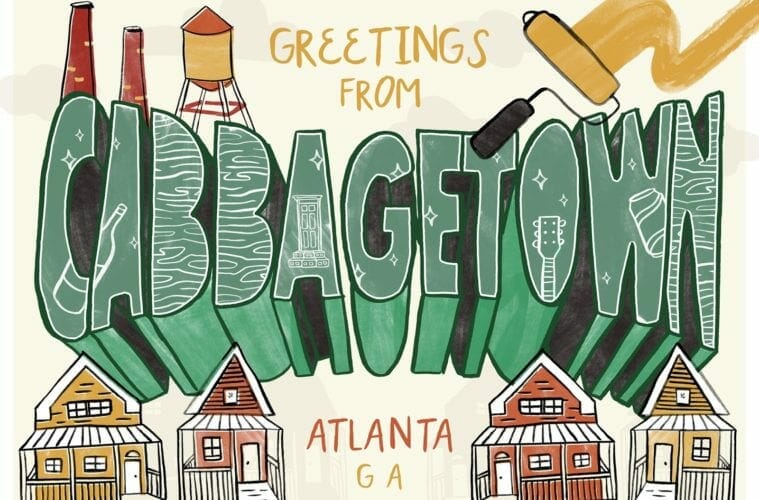 Greetings From: Cabbagetown evolves from mill town to artistic playground

Editor’s note: This story on Cabbagetown kicks off our new “Greetings From” series. Each month, Lynne Tanzer will take an in-depth look at the artistic side of a metro neighborhood. Our postcards are created by artist Sarah Lawrence, with photography by Kelley Raye (be sure to check out her photo gallery at the end of the story).

The charm of Cabbagetown is apparent from the moment you step foot in the candy-colored neighborhood. Listed on the National Register of Historic Places, “C-Town” is an artist’s playground, whether your tool of choice is a six-string or a can of spray paint.

“It is a creative, close-knit and supportive community, and there is a great sense of pride and belonging among the residents.” The Cotton Mill Lofts are the neighborhood’s North Star.

The Cotton Mill Lofts are a beautiful example of some of the earliest industrial architecture in the city. The lofts can be seen in the 1989 movie Driving Miss Daisy, and served as the home base for the Fab Five for a season on Netflix’s Queer Eye.

The Cotton Mill Lofts are also referenced in the murder-mystery Catlick podcast, which is described as a “lost story of how spies, villains and midnight vigilantes nearly destroyed the South’s grandest city.”

Cabbagetown was built to house immigrants and workers brought from the Appalachian Mountains to work in the mill. The laborers brought their Appalachian musical traditions with them and laid the foundation for the many musicians to follow. You can hear some of the influences on the compilation album The Cabbagetown Chronicles. This anthology was released in 2019 to commemorate the Cabbagetown music scene. It was funded by the Georgia Music Foundation, led by James Kelly and Dirgat Seachrist in partnership with Patchworks Art & History Center. Patchworks is a nonprofit dedicated to preserving Cabbagetown’s historical identity, relevance and integrity. The album features Cat Power, Fiddlin’ John Carson, Smoke and The Rock*A*Teens.

WHERE TO GET INSPIRED:

The Krog Street Tunnel is an eyesore to some and an ever-changing urban art gallery to others. It was built in the early 1900s as a way for commuters to get from Cabbagetown to the rest of Atlanta.

The underpass doesn’t have a single square foot of space that isn’t covered in spray paint, wheat-pasted fliers and a particularly lovely disco ball Pac-Man ghost.

Graffiti has been popping up as far back as 1967 — some good, some great, some godawful. On any given day, wandering through the Krog Tunnel can land you the accidental gig as an extra in a student-made film or a Soundcloud rappers’ music video. It has even inspired a recent classical music piece performed by the Atlanta Symphony Orchestra. The graffiti-filled Krog Street Tunnel is one of the neighborhood landmarks.

In 2014 the Krog Street Tunnel became the home of the first Tiny DoorsATL. A second Tiny Door can be found within walking distance of the first, on the side of the neighborhood watering hole Milltown Arms Tavern. The Krog Street Tiny Door gets a makeover every now and again when principal artist Karen Anderson-Singer teams up with other local artists to inspire the masses. Artists have included R. Land, Catlanta, Lucy Ricketts and, most recently, the Lotus Eaters Club, whose members created an interactive augmented-reality façade.

Forward Warrior, which began as a live-painting event at the now-closed Melvin Gallery in the Old Fourth Ward, now happens annually in Cabbagetown. The arts event is spearheaded by Peter Ferrari and made possible by the support of the nonprofit Cabbagetown Initiative. Each year a half-mile stretch of Wylie Street — from Pearl Street to Carroll Street — becomes a permanent patchwork quilt of public art. From pretty to political, Forward Warrior ensures that the artwork imagery is as diverse as the artists themselves.

Stacks Squares Mural Project is another community-driven rotating gallery space. The murals are changed seasonally and curated by artist Austin “Blue” Richardson. The squares themselves surround the perimeter of the famous Cotton Mill Lofts.

The lofts aren’t the only impressive digs in the neighborhood, however. The Cabbagetown Tour of Homes is a must-attend event, where architecture enthusiasts and inquisitive/nosy people unite to explore the farmhouse Victorian homes, brightly colored bungalows and 1900s shotgun-style abodes. A shining star on the Cabbagetown calendar of events is the Chomp and Stomp chili cook-off and bluegrass festival. Music fans and food aficionados flock to taste the crazy chili concoctions and clap for the complex chord progressions of the fiddle and banjo players.

The essence of Chomp and Stomp lingers through the Cabbagetown concert series at the Brookshire stage in Cabbagetown Park.

If you ask any Atlantan where to take an out-of-town guest, you can bet that a walk around Oakland Cemetery will be near the top of the list. Atlanta’s oldest public park is the final resting place of some of its most noted citizens — including Gone With the Wind author Margaret Mitchell. The cemetery is the backdrop to Lil Nas X’s Carry On music video and a scene-stealer in the movie Fast and Furious 7.

Other events like Tunes From the Tombs, an indie music festival that spotlights local musicians, is on the cemetery’s calendar. Sunday in the Park is an affair meant to channel the old-world tradition of meeting at the cemetery to revere the dead by celebrating life. Public art and murals help define the character of Cabbagetown. The iconic entrance to Oakland Cemetery. The Forward Warrior project has marked the Cabbagetown landscape with bright murals. Inside the Krog Tunnel and its ever-changing graffiti art. The village was built with an abundance of modest homes for the Appalachian families who came here to work in the cotton mill. The first Tiny Doors ATL project was in Cabbagetown. This one is on the side of the building that holds the Milltown Arms Tavern. Carroll Street goes through the center of Cabbagetown.