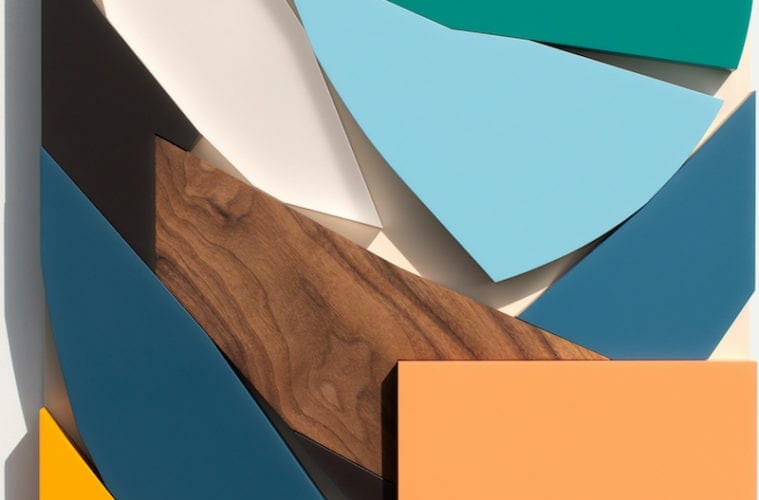 All the Charles Edmiston paintings at ABV Gallery are untitled. His show runs through March 28. (Images courtesy of ABV Gallery)

Review: Charlie Edmiston covers all the modernist angles in show at ABV Gallery

ABV Gallery is temporary closed as it monitors the COVID-19 pandemic. You can see the work in Charlie Edmiston’s “Carbon Copy” online HERE.

Modernism is alive and well and quietly visiting from Los Angeles in this solo exhibition of Charlie Edmiston’s minimalist relief paintings at ABV Gallery through March 28.

The exhibit, titled Carbon Copy, brings together a collection of wall-mounted works ranging in size from about 2 feet square to about 4 feet by 5 feet and as much as 4 inches thick in parts. Edmiston’s pieces function as dimensional paintings. Most are composed on a thin rectangular or square slab of black or white. Thickly cut and oddly angular shapes are placed in carefully executed arrangements on top of the backing. The thicknesses of the components vary from shape to shape but are generally consistent within a single facet, so the surface planes remain parallel with each other and the wall.

It’s the colors more than the forms that invite your attention. The shades are soft yet vibrant. The eye is carried along a jumbled path of almost interlocking shapes. Each facet carries a single matte-finished color, carefully cut and smoothly sanded as if to remove all distractions, its identity is simply color. You’ll see pinks, lavenders, browns, sky blues, mustards, warm and cool grays, and an assortment of near-primary reds, yellows and blues. Even the richest colors feel restrained — never full volume and always dialed back a tint or two below full saturation. This is an indoor palette, never garish, always restful. The effect is alluring and nonconfrontational. 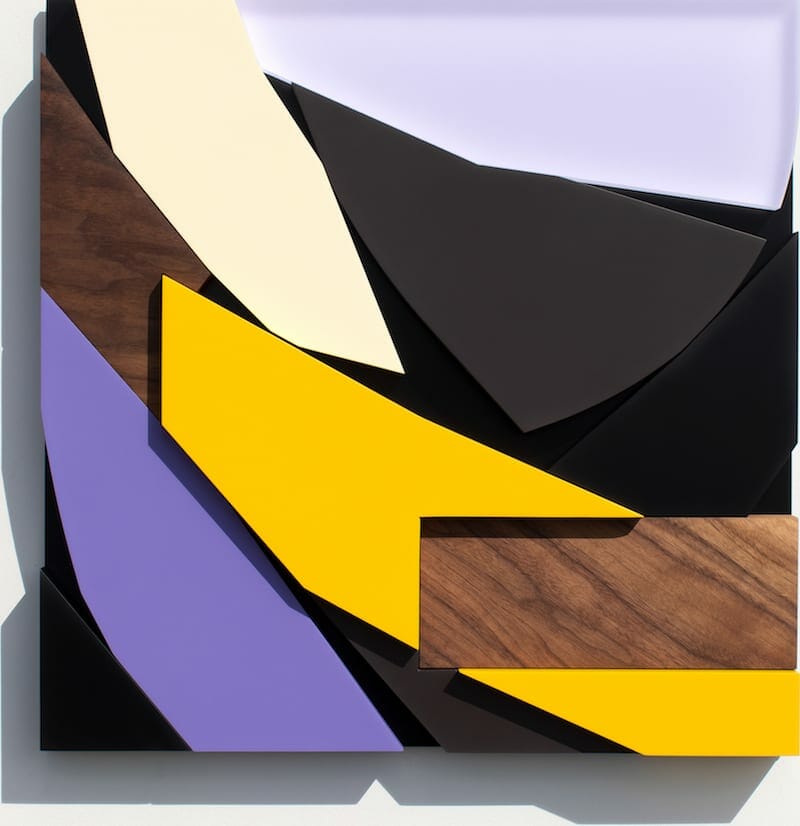 Mixed in with these seamless shards of color are occasional earth tones and natural grains of stained walnut. Most compositions include a single shape made of colored epoxy, thick and smooth cut. The epoxy pieces are softly, barely translucent like a frozen fog of color. Each invites enough light to make the viewer aware of its thickness but never enough to see through. They function less as windows and more as reminders of the dimension of the relief and the flatness of the other shapes.

If you were to disassemble one of these paintings, you’d find that a handful of shapes are simple rectangles, while the rest defy categorization. There are corners and curves, notches and bulges, but rarely do individual pieces remind you of anything in particular. They function as pure elements of color, direction and compositional weight. 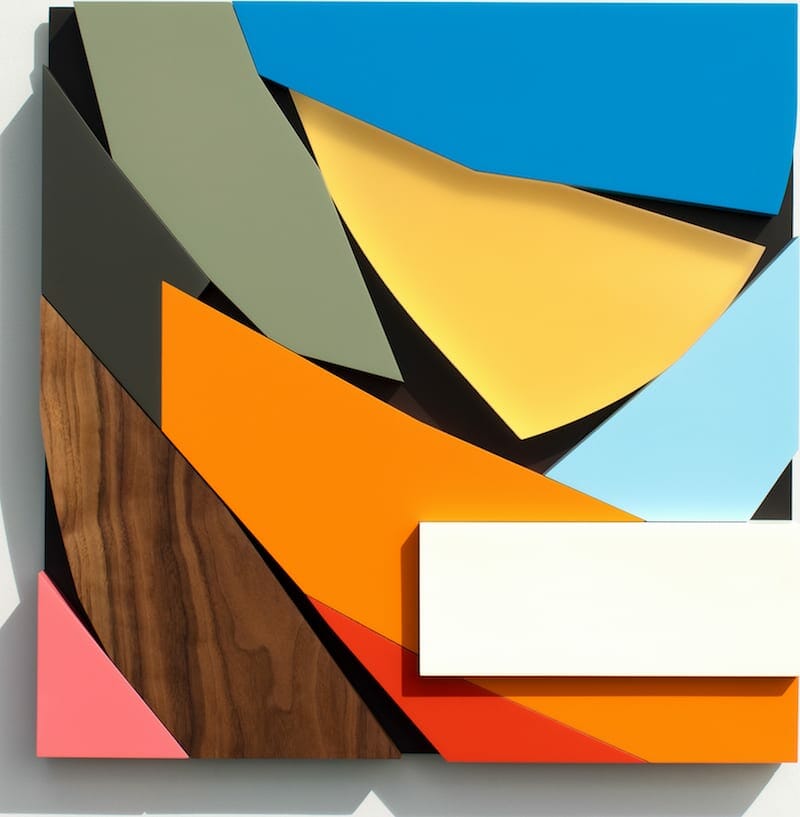 There’s a subdued stability to the placement of each shape. Some forms nest neatly along a corner or edge, while others imply intersections. Some elements abut each other, leaving gaps that let the background color peek through. The pieces are loaded with diagonal lines from the edges and corners. One might expect the angles to impart a sense of tumbling or active movement, but they feel like they’ve just come to rest of their own accord. They’re like a collection of logs that floated together in a river bend. These parts have found a mutual equilibrium — gathering in a mass governed by a logic of liquid, all afloat on a single surface. Different in hue and contour but with shared buoyancy.

To follow the Carbon Copy theme, the untitled paintings are hung in sets of two, with one set of four. The paintings in each set are are identical, made distinct only by the choice of thickness, color, material and shape. Edmiston begins each work by planning the two-dimensional shape arrangements on a computer and exploring color combinations until he’s satisfied. Then he can extract any shape he desires and precision-cut it to size. The painted pieces receive several coats of nitro-acrylic and are sanded to achieve a smooth, flat finish with clean sharp edges.

These paintings provoke a game of comparisons. Edmiston flirts with light and dark backgrounds, warm and cool palettes, and reversals of elevation. Side by side we notice common focal points and are surprised by changes in mood and movement. Yet the pieces are never discordant. The moods are hopeful and contemplative. These are not paintings of bombast or exuberance. They aren’t joyous or angry. They are aqueous states of mind — leaning toward chaos but never indulging. 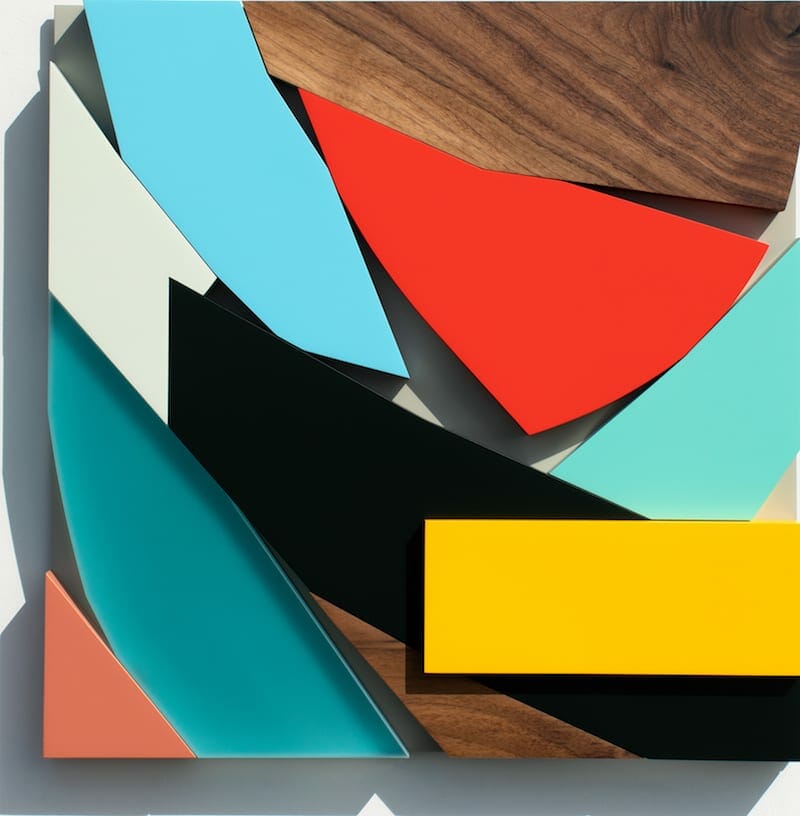 A modernist ancestry suffuses this show’s obsession with process and form. There’s a strong influence of Ellsworth Kelly (1923–2015) in Edmiston’s affinity for minimalist monochrome forms. The comparative nature of the show brings the role of color to the fore. The emphasis on juxtaposition evokes the serial chromatic studies of Josef Albers (1888–1976) and later Color-Field painters like Gene Davis (1920–1985).

It also could be argued that Edmiston owes debts to the painted reliefs of Jean Arp and Matisse’s cut-outs. The compositional dynamics can trace a lineage to the Suprematist compositions of Malevich and Lissitzky — although filtered through the shaped canvases and hard-edge op abstraction of the late Tony DeLap. They’re also reminiscent of the orderly fracture of light found in the waters of David Hockney’s pool paintings.

Charlie Edmiston has come a long way from his street-art roots. He’s embraced formal experimentation and iterative processes. He’s learned how to call attention to the elements in his command without calling attention to himself as an auteur. The invitation to compare paintings A and B is an invitation to engage in a personal interpretation liberated from a preoccupation with the artist’s narrative.