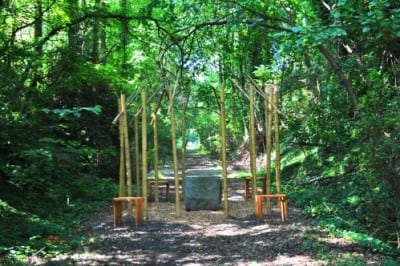 News: 66 artists named for fall “Art on the BeltLine” exhibit

Much anticipated, the list of artists for the 2011 “Art on the Atlanta BeltLine” event has been announced. In all, 66 visual artists and performing groups will offer temporary installations along the 22-mile trail from September through November. Last year’s debut was billed as Atlanta’s largest exhibit of public temporary art.

The exhibitions will be bunched in four parts of the disused rail corridor-turned-greenspace, sections that might be described as not yet fully “colonized.” On the Westside, it will include a stretch from Gordon White Park northward to Washington Park and another from Allene Avenue to Lee Street. Midtown’s portion will run from 10th Street and Monroe Drive (at the southeastern corner of Piedmont Park) up to Montgomery Ferry Drive. Reynoldstown’s piece of the BeltLine will be included, from Wiley Street to Memorial Drive.

Scenes from the 2010 debut of "Art on the BeltLine." Above: Arturo Lindsay's "Sanctuary." Below: Brooks and Company Dance in "MENT." Here’s the full list of performance and visual artists for the 2011 event, drawn from the Atlanta BeltLine website: