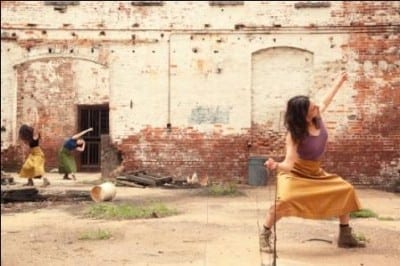 Some months ago, choreographer Blake Beckham surveyed the Dovetail, a place at the back of the Goat Farm Arts Center where people rarely go. It’s one of three locations at the former cotton mill where she planned to set “PLOT,” her first outdoor site-specific work. Barren winter trees grew out of a run-down, century-old machine shop. On top of a gravelly slope stood an abandoned white semi-trailer with the word “HARSH” in black graffiti. A train rumbled past piles of brick ruins. Beyond, the Atlanta skyline.

“I was so enchanted, and then I just felt utterly intimidated,” Beckham recalled. “Like, this space is so majestic. How am I ever going to fill it?” The answer appeared during the work’s formative process. “As vegetation stared to grow, in the spring and summer, the shape, the way we would use the space, revealed itself.”

“PLOT” is the most elaborate production yet by Dance Truck, a unique mobile performance venue, and it will be Beckham’s most ambitious work. The hour-long, dusk-to-darkness performance will receive its premiere at the Goat Farm on Thursday, July 28, and will run through July 31. Advance tickets are recommended. 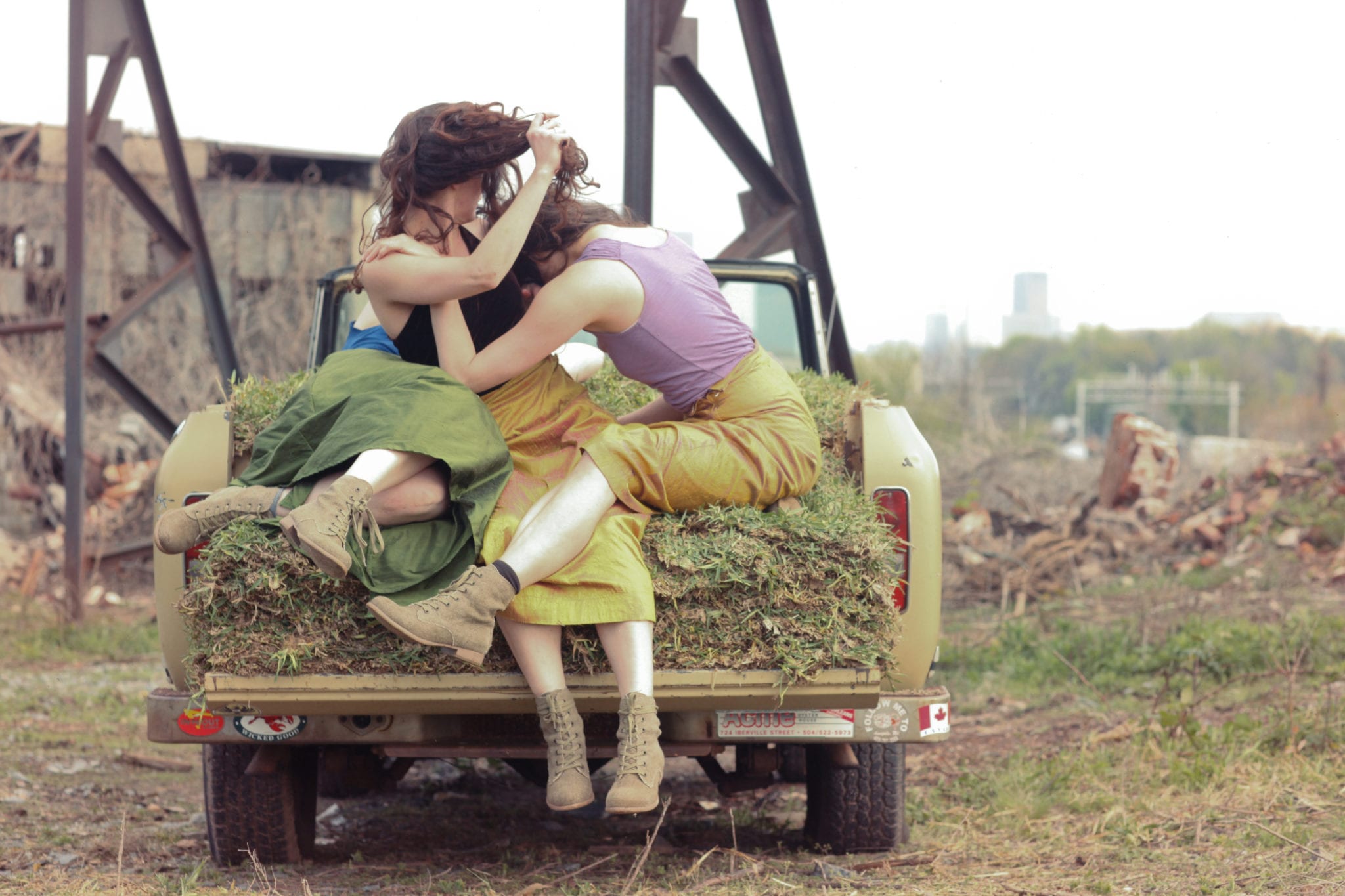 Since Dance Truck’s debut at Le Flash-Atlanta in 2009, Beckham has been the presenter’s most engaged dance community member, contributing to nearly all of the 17 free performances Dance Truck has offered under its mantra “Bringing Dance to the People.” She earned a master’s degree in dance from Ohio State University, the alma mater of her Emory University mentors, Anna Leo and Lori Teague. For most of the past 10 years, Beckham has choreographed and co-produced concerts in Atlanta and performed with Nicole Livieratos, whose movement-based performance art has been a major influence.

But the strongest influence and support for “PLOT” has come from her artistic partner, Dance Truck founder and lighting technician Malina Rodriguez. Rodriguez found a passion for dance production as technical director for the Portland Institute for Contemporary Art’s Time-Based Art Festival. She sought similar outlets after she moved to Atlanta in 2008 and first saw Beckham perform at the 2009 Decatur Arts Festival. “She was so focused and fierce about dance,” Rodriguez recalled. Beckham was the kind of independent choreographer Rodriguez was looking to produce: passionate and inspiring, and who “flipped my world around,” Rodriguez said. 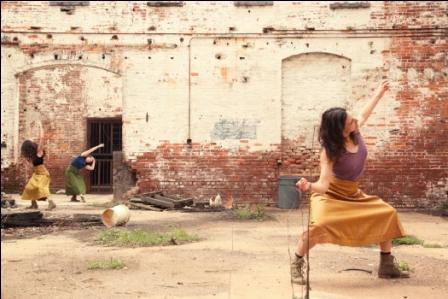 Rodriguez coordinated production and lighting for Beckham’s “American Muscle” last September at Eyedrum. The two worked with WonderRoot to produce “Magnetic Drift” in May. They recently formed an organization called the Lucky Penny, intent on presenting movement-based performance art in Atlanta by cutting-edge local and national talent. “PLOT” will be Dance Truck’s first ticketed event and the organization’s first evening-length production by a single choreographer. Of the project’s $14,000 budget, Rodriguez is working toward an $8,500 goal to pay artists.

While deep in production of “American Muscle,” Beckham envisioned an old pickup truck filled with rolls of sod. It was both a garden bed and funerary bed, she explained, part of “the universe that exists within a plot of earth,” which contains processes of decay and growth, changing seasons and the passage of time.

The dance maker chose the Goat Farm because the presence of decay and evidence of time’s passage are visible and palpable. It’s also a trendy place. The decades-old artists’ community has experienced a flurry of activity during the past year, partly due to the entrance of organizations such as the Collective Project theater group, Lauri Stallings’ gloATL and as one of Eyedrum’s satellite locations. 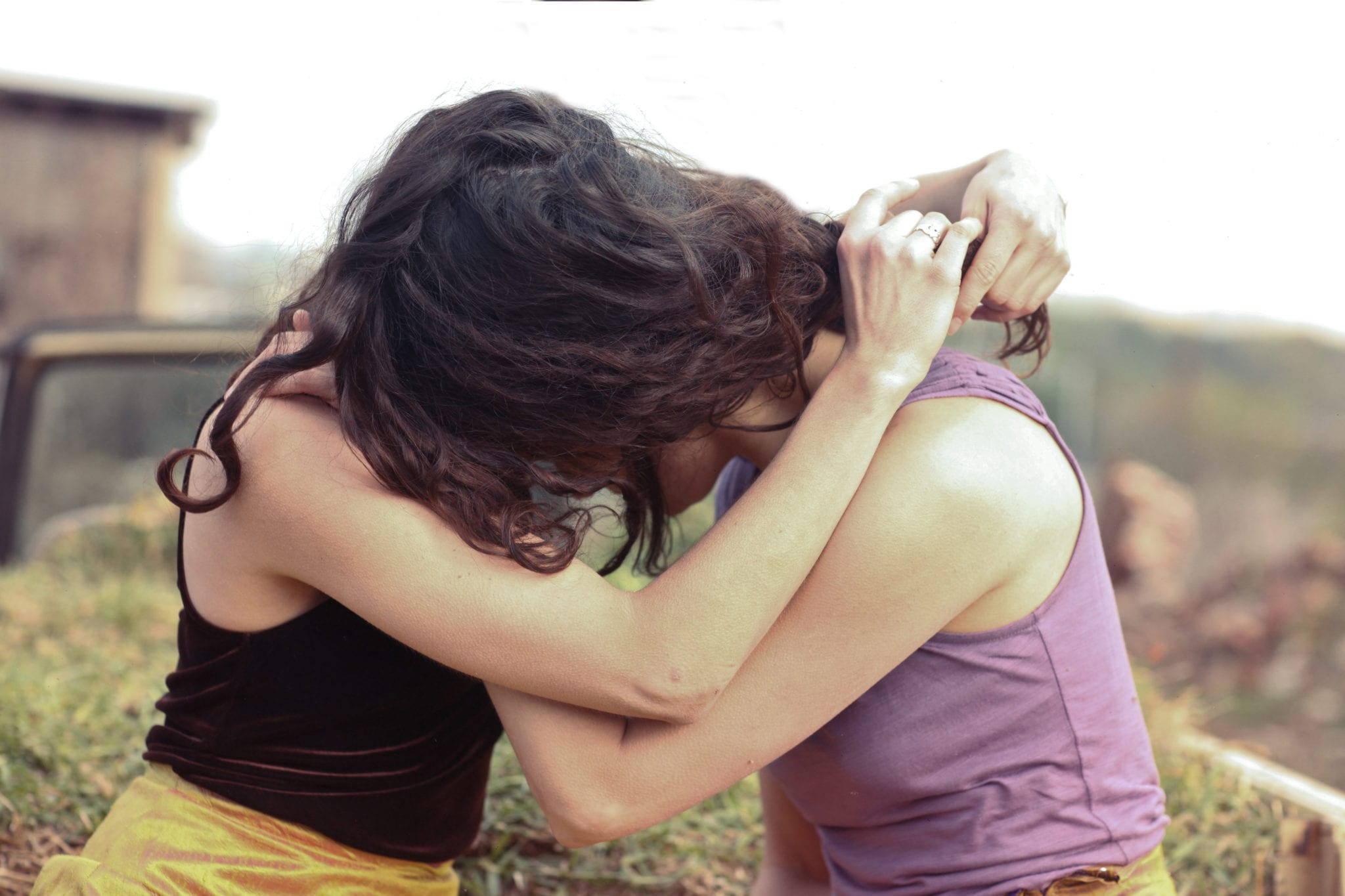 Rodriguez explained that the Goat Farm is as much a character in “PLOT” as the dancers and the sod-laden buttercup-yellow 1976 Chevrolet Scout International truck, the result of Beckham’s initial vision. The vehicle will guide audience members from the venue’s grassy Breezeway, or Village Green, where the work addresses the vigor and rigor of growth, to the Dovetail, centered on digging and breaking through a surface, and finally the Rodriguez Room (formerly artist Rocio Rodriguez’s studio), where a raised stage will expose a root system, an underbelly of sorts.

At the Dovetail today, kudzu has blanketed the machine shop’s exterior and waist-high weeds surround the gravel area, now an in-the-round performance space. A somewhat level spot at the top of the slope serves as a stage, with the trailer as backdrop for dancers Emily Christianson, Camille Jackson and Alisa Mittin. Like the greenery, a supportive artistic community has appeared as the project gathered momentum. About 40 people have joined the “PLOT” project as artists, interns and volunteers.

Artist Neil Fried’s video images will be projected onto the Breezeway’s brick walls, where decades of paint, plaster, tar and concrete coatings suggest layers of experience over time. The Dovetail’s white trailer will also be a projection screen. Visual artist Julia Hill’s set pieces will include a large scrap-metal wind chime, scenery made from pieces of glass and steel gathered from machine shop rubble, and others that are under wraps at this writing.

“PLOT” also represents a seasonal shift for Beckham, who recently left a full-time arts administration position in order to solidify her artistic voice in the community. “This piece represents risk in a lot of ways,” she reflected. “Personally and professionally, this is a tremendous stretch for me. I’ve been so humbled by the momentum behind the project and the scores of people that are showing up to help us. No pun intended, but it is completely a grass-roots effort. My community has been revealed to me in an extraordinary way.”