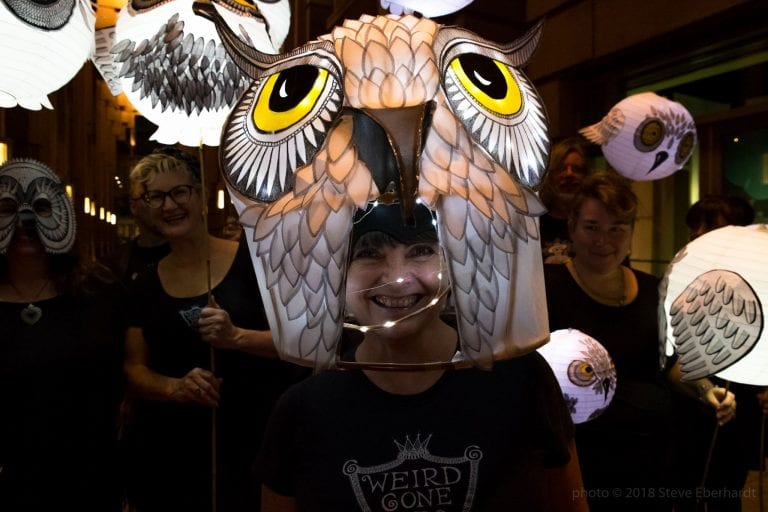 Finding Chantelle Rytter’s studio at the Promenade II building is no easy feat. The security guard on duty at the front desk of the sleek midtown office tower gives a blank stare when asked for directions to the Owl’s Nest. But a hint of recognition flashes when she remembers, “Well, there is this one lady who comes and goes at night, working on something . . .”

As it happens, being a night owl comes in handy for Rytter’s work, making lanterns best viewed in the dark. As founder and captain of the Krewe of the Grateful Gluttons, she has been advocating grown-up playtime with her nighttime lantern parades since 1999. Her annual Atlanta BeltLine Parade and Grant Park Halloween Lantern Parade have enchanted spectators while blurring the lines between participant and bystander. When her Parliament of Owls: A Midtown Lantern Parade, a black and white owl-themed lantern parade, takes flight on August 3, the social shenanigans will reach new heights.

Rytter currently occupies an 800-square-foot studio on the mezzanine level of the Promenade II that Cousins Properties gives to an artist for two years. She’s nicknamed it, appropriately enough, the Owl’s Nest. Like her spirit animal, Rytter typically flies solo while working. And she even resembles an owl with her enormous brown eyes; round, open face; raven-colored, winglike brows and her thoughtful disposition.

“Holding up a light is a universal gesture of faith and support and a symbol of community around the world,” she says. “Civic play connects people to people, and people to place. It fosters enduring bonds and alters social conventions when people from all walks of life laugh and dance and chat together.”

Her studio decor hints at her love of spectacle and her desire to cultivate “joyful shared memories in a place that leaves blessings on that place.” The ceiling is covered with hanging paper lanterns in an array of festive colors. Six over-sized spinning owl headdresses dot the space. One wall is papered with enormous line drawings of owls by Steve Eberhardt, a professional photographer whose pictures of past parades Rytter considers a game-changer because she finally had beautiful documentation of her work. There are giant owl puppets with articulated wings mounted on backpacks. An eye-high filing cabinet brims with prototype cut-outs for three species of owls, the Southern Urban Forest Owl, Crested Creeper Owl and Starred Barred Owl (all figments of Rytter’s imagination) in adult, juvenile and owlet sizes. Skeletons constructed of willow branches from England occupy one corner.

Rytter’s appreciation for parade culture began when she lived in New Orleans from 1991 to 2001. “I didn’t grow up with a lot of family traditions,” she says. “But I admire the way New Orleanians want you to eat their food, like their music, learn their dances and sing their songs. Not going to Mardi Gras there is like not voting elsewhere in the country. They’re like, ‘AHHHHHHH! Don’t be like that!’”

Rytter has been bringing Louisiana mojo into Atlanta with one important change. Whereas membership is required to march with a krewe for Mardi Gras in the Crescent City, there are no barriers to participation in a Grateful Gluttons production. Whether you want to download a free owl mask online and make one at home, attend a lantern-making workshop in the weeks leading up to the big night or whip up your own design in the 11th hour and flock with the krewe (owls are white, attire is black), all comers are welcome.

These days, nothing gives Rytter more pleasure than watching Atlantans embrace a shared tradition they can call their own. Recently, while addressing a class of third-graders, Rytter stood in front of big, beautiful pictures from the Atlanta BeltLine Lantern Parade projected behind her as she introduced herself as the woman who created the BeltLine Parade. At that point,  she was cut off when a nine-year-old erupted with the objection, “No, you did not!”

Far from being taken aback, Rytter was flattered by the child’s outrage.

“I love how my claim seemed impossible in the mind of a kid for whom there has never not been an Atlanta Lantern Parade,” she says. “This kid was born into it, and it’s all he’s ever known. So my saying I started the Lantern Parade was like saying I’d invented Halloween or Mardi Gras. In his mind, it was ridiculous.”

At 8:30 p.m. on August 3, participants for Rytter’s latest event Parliament of Owls will convene at the Promenade II building at 1230 Peachtree Street, NE, and fly across 15th and into Sifly Piazza at the High Museum at 9:10. From there, the parade will swoop down to the sidewalk on Peachtree Street, head to 14th Street, cross Peachtree and perch at the Plaza at Colony Square for a beat before nesting for post-parade drinks on the veranda at The Castle.

The procession will include 18 members of the Black Sheep, an Atlanta-based street band that’s been parading with Rytter for nearly nine years. “Their mobility is a key part of what they are as musicians,” she says. “They are not tethered. They can roll and play, and they have a big sound!”

The ensemble will be dressed to thrill, their instruments will be decked with miniature owl lanterns and their rolling drum kit will be illuminated by a tiny disco ball suspended beneath an umbrella. As for the playlist, tunes like The Who’s Who Are You, Bo Diddley’s Who Do You Love and Albert E. Brumley’s gospel classic I’ll Fly Away are being curated to encourage singalongs and spontaneous participation from the crowd.

Rytter says that the idea behind the Parliament of Owls, as with all her events, is not to come see the parade, but to come be the parade.