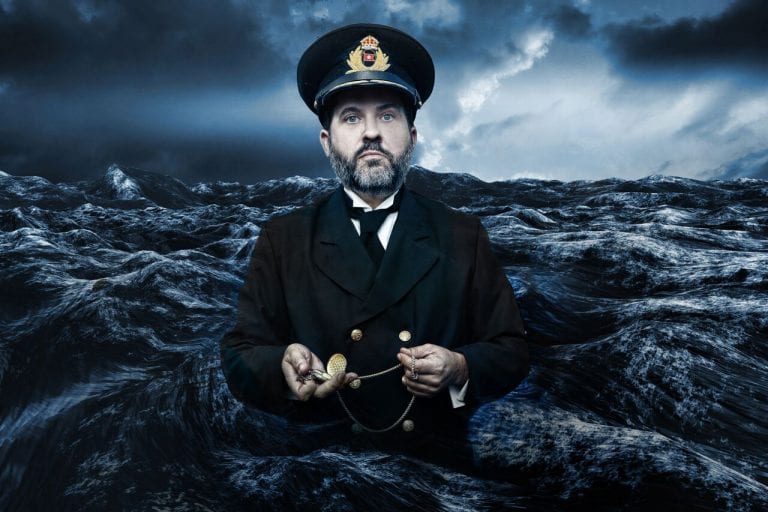 Eric McNaughton stars as the captain of the ill-fated Titanic in Serenbe's ambitious production. (Photos by BreeAnne Clowdus)

Review: Serenbe’s “Titanic” rises from the depths for an unforgettable experience

When Serenbe Playhouse’s Brian Clowdus makes up his mind to do something, neither physics nor the assumed laws of theater can stand in his way. The man who notoriously plopped a real fair into the background for his Carousel and landed a helicopter for his Miss Saigon is now charting the demise of the RMS Titanic on a lake in Serenbe. Clowdus’ highly energetic staging makes the new version of Titanic: The Musical (running through August 12) something really amazing to see and experience, even if the musical itself is not a grand one.

With a cast of 40 performers, Clowdus — Serenbe’s artistic director who is also directing this production — makes this all believable. Steam pours out from Adam Koch’s elaborately designed ship as the show starts, and the images of the passengers walking onto the dock one by one and boarding the ship soon after is quite memorable.

Among the characters on the ill-fated voyage that sank in 1912 are designer Thomas Andrews (Chris Sizemore), Captain E. J. Smith (Eric McNaughton), the ship owner Bruce Ismay (Robert Hindsman) and stoker Fred Barrett (Chase Peacock). As for the passengers, the ship has numerous first-class patrons and second- and third-class ones as well, all played by some gifted actors and actresses, many Serenbe regulars.

Koch has envisioned a 100-foot-long Titanic with scaffolding, several stories high, complete with a submerging chandelier and built over a lake. The ocean liner doesn’t necessarily sink, but towards the end several compartments do drop into the cold water below. It’s a huge undertaking for the set designer — one that works beautifully early on as passengers and crew stand in awe of the vessel and then later on amidst the savagery and heartbeat of the ship’s tragedy.

Clowdus knows how to make his productions “events,” but they aren’t just empty spectacle. For all the attention Miss Saigon generated, the musical was much more than the “helicopter landing show.” Without the performances of Niki Badua, Chase Peacock and Eymard Cabling anchoring the musical, the appearance of the helicopter late in the show would not have mattered.

This is a tremendously theatrical piece of work, and the large cast is put through a physical ringer, especially in the latter stages. Act I closes as the ship hits the (unseen) iceberg, and the sound effects are scary and intense. Titanic peaks in its second act when some passengers begin to board lifeboats and others are left to sink. One by one, the remaining passengers fall into the water below. The images of the boats drifting away, dazed looks on their passenger’s faces, and the remaining passengers splashing around in the water later as the ship sinks are impossible to forget.

If only the material were as bold and electric as its staging. Titanic — with a book by Peter Stone and music and lyrics by Maury Yeston — won a Best Musical Tony in 1997 in what was considered by many to be a very weak year for musical theater. Like the infamous movie version, the stage musical is in no hurry to get to the meat of the show either. Save for a handful of numbers, I’ve always found Titanic to be overstuffed with characters and under-stuffed in notable music. Many of the songs are simply bland.

Yet I loved “There She Is,” as crew members gaze up lovingly at the ship, and “Lady’s Maid,” in which three Irish young ladies named Kate (Badua, India S. Tyree and Casey Shuler) reflect about what life will be like in America. Robert Wayne and Lilliangina Quinones have a standout moment with “Still” as they cling to each other rather than part as death awaits them. The closing passages of the show are also especially poignant, as the survivors look back on the tragedy and long for their loved ones.

Titanic is not staged regularly due largely to its large cast. A 2012 re-working of the show featured only 20 actors playing all the roles, but Clowdus has staged the original version. It’s no real fault of his, but in a cast of 40, many of the cast members blur together somewhat. This is very much an ensemble piece instead of a showcase for individual actors and actresses. Indeed, none of its original Broadway actors were even nominated for Tonys. Yet to their credit, many of the performers here register, particularly Sizemore, Shuler and Peacock.

A few times, the large band — led by music director Chris Brent Davis and located behind the ship on dry land — overpowers the singers but for the most part do wonderful work. Kevin Frazier has some key lighting effects, and the period costumes by Alan Yeong are also stylish and distinctive, especially separating the classes aboard the ship. Kudos, too, to props designer Christopher Dills for equipping this and making it all seem realistic.

I saw the show after a rain delay of about an hour over the weekend and a rained-out attempt the week before. The wait was worth it — the night proved to be a cool and starry one to see it. While a concert version is planned for nights when the weather doesn’t cooperate, my advice is to do everything possible to see the real deal.

In my book, this version of Titanic isn’t quite on the same level as the company’s Hair, Cabaret or Miss Saigon, but in all fairness, that is due to the material. It’s highly unlikely audience members will be humming much of the score afterward, but as an immersive experience, this is another unforgettable, passionate project from Clowdus and crew.