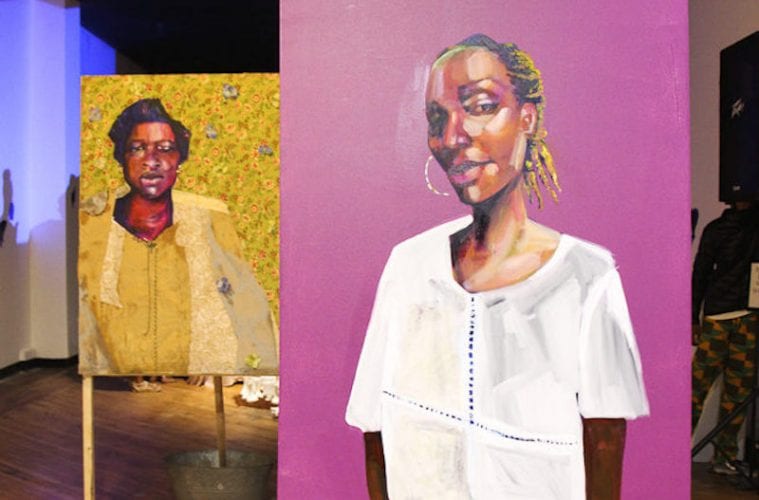 Kind of Blue: Angela Davis Johnson tends to the wounds of the diaspora with “BLU BLAK”

Sweeping strokes of color illuminate the vulnerable stares of the women in Angela Davis Johnson’s portraits. Some are suspended from the ceiling, others are immersed in a pool of blue water or covered in Georgia red clay, and a few hang on the walls in BLU BLAK, the artist’s solo exhibition at MINT Gallery through July 28.

Johnson, who has been painting since the age of 12, was raised to embrace color. “My mother was an artist who would take everything that she learned and bring it back to us,” she says. “She wouldn’t let us use black or white.” Johnson continued to apply that ethos during her studies at a magnet school in Norfolk, Virginia, but it wasn’t until her family relocated to rural Arkansas that she began to use color metaphorically. “Creating as much information as possible with one brushstroke became really important to me,” she confides. “Each stroke is potent. It’s very self-healing.” 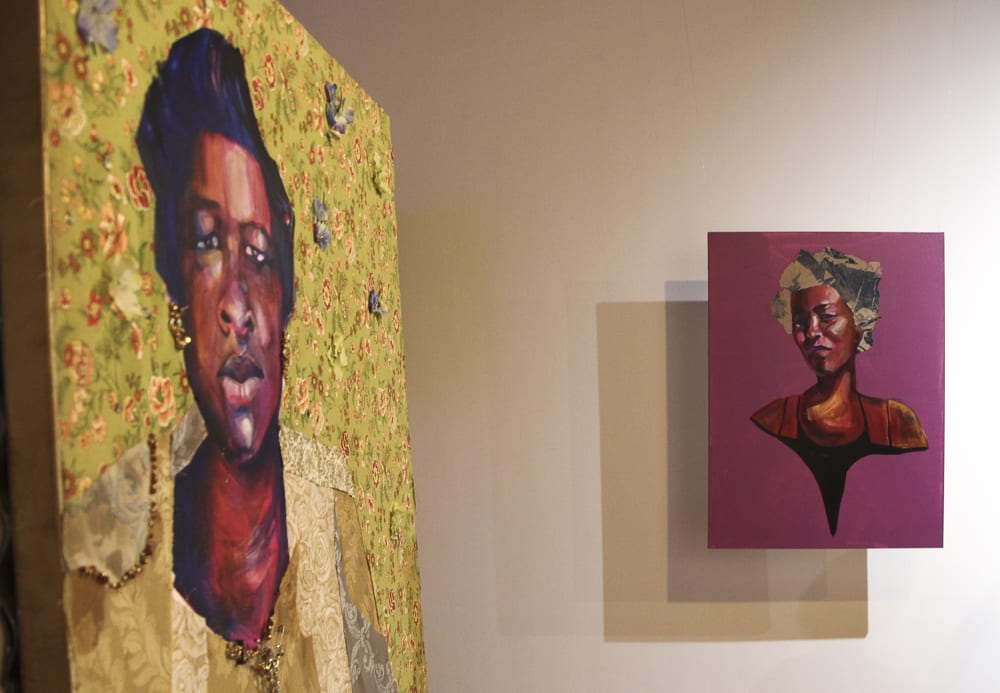 Healing is one of the chief concerns of BLU BLAK, as well as the culmination of years of work addressing issues of trauma, identity and the black diaspora. Johnson was selected as an Alternate Roots Visual Arts Scholar for her work in art and advocacy in 2015 and has been nominated twice for the Joan Mitchell Foundation’s Emerging Artist Fellowship and Painters/Sculpture grant. Currently, the mother of two is a MINT Leap Year artist and Wonderroot’s first Artist-in-Residence.

Amidst all of her advocacy and achievement, Johnson found herself at an emotional crossroads. “I’d been creating works about missing women of color with artist Jessica Caldas’ #3EveryDay project, tackling issues like domestic violence. It was getting really challenging to create about trauma.” Her own emotional breakthrough came from a challenge posed to all women of color by bell hooks: “She was challenging us to show stories of trauma while also talking about the survival of trauma.” 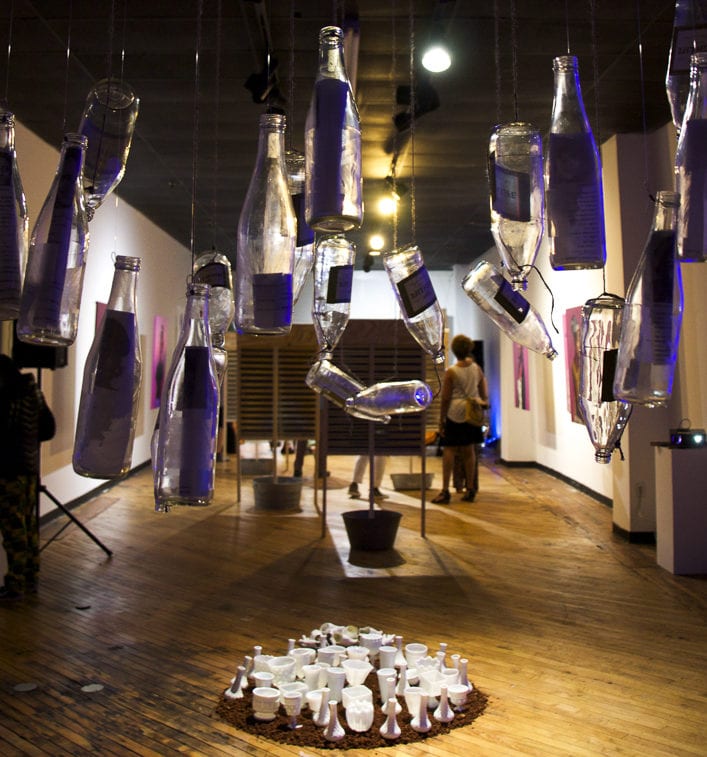 It was then that Johnson began to contemplate blue holes. “I started to imagine blue holes along the TransAtlantic Passage, as a place for slaves to escape, to learn to breathe underwater, to find their families there. What stories would be there?” She decided to imagine the blue holes not only as a space for healing, but as a transcendent space that could manifest everywhere, including Atlanta. “BLU BLAK is an archive of information from Black folks in this Atlanta blue hole. What does it mean to be in the aftermath of slavery, the aftermath of being seen as someone else’s property?” 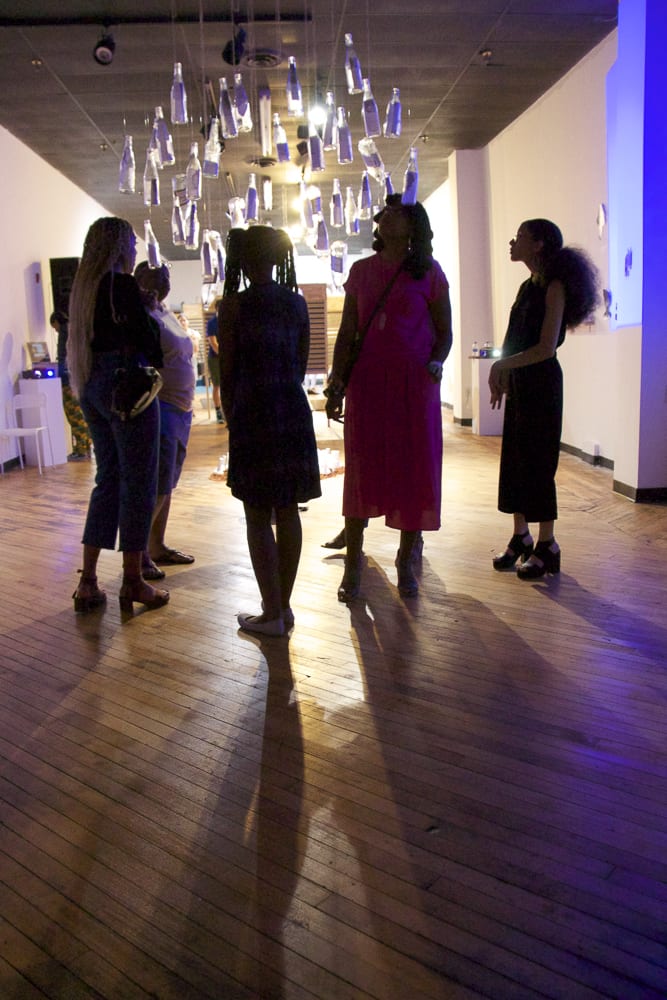 Though the exhibition is described as “an archived collection of almanac entries, myth making, portraiture and arranged objects,” it is more than that: Johnson gets down to the rough truths of a people, contemplating what it means to heal as a population, to come out of trauma triumphant.

The first room of the exhibition is imagined ephemera from the blue hole itself, multiple images of mugshots with an almanac stenciled on top, unfinished drawings, black chairs. The last room is what Johnson describes as a “cosmograph of domestic items”: milk glass in a bed of red clay, suspended glass bottles with images of missing women of color (or “prayers being captured,” as Johnson describes them).

An eerie blue light emanates from a projected video (created in collaboration with Muthi Reed of Hollerin Space ) of Johnson creating casts of women’s hands. The results of her labor, the 30 cast hands, are physically present in the room, as well. Johnson says that hands are an important symbol in the show, functioning simultaneously as weapons and as tools for healing.

“I want to wear them,” she says. “I want to make a suit or a shield or a crown or a veil. I’m only here because of the hands that have been put on me for generations. I feel my mother’s hands on me when she was a struggling artist with four children, my grandmother’s hands, my six-year-old daughter’s . . . Wearing them would allow me to be a noisy, visually strong thing.”

Johnson’s aim is to instill viewers, especially women and people of color, with that same kind of strength. Throughout the exhibition’s run, she has conducted “live dreaming sessions” centered on the voices of black women, extending an invitation to participate in hand castings, dream sharing and self-care through a performance conducted by her friends and fellow artists Danielle Deadwyler and Karimah Dillard.

Johnson references Christina Sharpe’s work In the Wake: On Blackness and Being, as well as Dionne Brand’s unpublished, but often quoted “Verso 55.” “They were my primary texts in creating this exhibition,” she says. “It makes me stop, ponder, chew on the language.” The show lays the foundation for Johnson’s blend of positive and nurturing works yet to come, as she clearly has so much more ahead of her to address and contemplate.