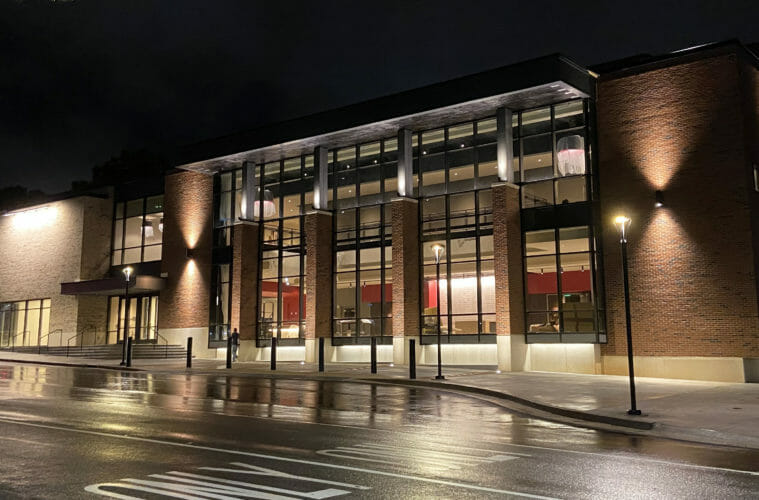 After much anticipation, the curtain rises this week on the $35 million, 59,500-square-foot Lawrenceville Arts Center, as it hosts grand opening tours Friday through Sunday.

Completing a city block for the arts in downtown Lawrenceville, the complex is the product of a remarkable partnership between Aurora Theatre and the City of Lawrenceville — one that, over many years, has played a significant role in revitalizing the Gwinnett County seat’s central business district.

The first full-production performances in the new building kick off November 26, when Aurora remounts its popular holiday revue, Christmas Canteen in the 500-seat Grand Theatre, the largest of three new performance spaces.

But on Friday and Saturday, the first two nights of Grand Opening Tours — dubbed the “VIP Experience” — tease what lies ahead with performances by Aurora actors including Travis Smith, Naima Carter Russell, Natasha Drena, Eric Moore and Juan Unzueta. A fundraiser for the troupe with “very limited” tickets remaining at $150, the VIP Experience includes hors d’oeuvres and beverages and the opportunity to meet theater and community leaders who nurtured the project to fruition. The tours will be offered at various times between 5:30 and 8:30 p.m. “Festive attire” is suggested. (Masks are required for all of the weekend’s tours.)

Sunday is the day reserved for public tours. Front-of-house tours beginning at noon include three new performance venues: the Grand Theatre, Morgan Cabaret and the Lawrenceville Arts Center Courtyard. Backstage tours starting at 12:15 p.m. include visits to Borders Rehearsal Hall, the costume shop and dressing rooms. Guests on these tours also get to go on the Grand Theatre stage and see the fly system (which allows the rapid movement of curtains, scenery and other theatrical elements during a show) and get a bird’s-eye view from the catwalk. Comfort with stairs and heights is advised for backstage tours participants. Public tours are $10 for front of house, $15 for backstage.

A contemporary glass and brick structure designed by SSOE | Stevens & Wilkinson and built by Carroll Daniel Construction, Lawrenceville Arts Center stands adjacent to Aurora’s current facility, a converted church more than a century old, in the heart of downtown.

In fact, the new edifice is sited so that the Grand Theatre’s soaring lobby looks out on the 1885 Historic Lawrenceville Courthouse and the city square.

“When you drive by, it looks like. ‘Oh what a nice performing arts space,’” Aurora associate producer Ann-Carol Pence said last summer, when construction was in overdrive and plans for the Grand Opening Tours were still in gestation. “But you walk in and you’re like, ‘There will be change here.’”

Pence said “change” is the promise to her city. “We will escort the next generation of theatergoers, we will move from babies to lifelong learners, we will do new work, we will celebrate Blackness, we will celebrate our gay and lesbian community,” she said. “We are going to create a Family Series because we want every little kid to come with his parents. This whole campus is going to be booked; it’s going to be full to overflowing. We’re gonna do it all.”

If that sounds like a tall order, Pence and her theater and life partner, producing artistic director Anthony Rodriguez, long have kept Aurora humming with a panoply of programming and community outreach during their two-decade-plus run.

Just last Sunday, Pence posted on Facebook: “For those keeping score: 8 events at Aurora Theatre yesterday, and all were for families — from Children’s Playhouse and multiple Ghost Tours to a James Brown [tribute] concert.” 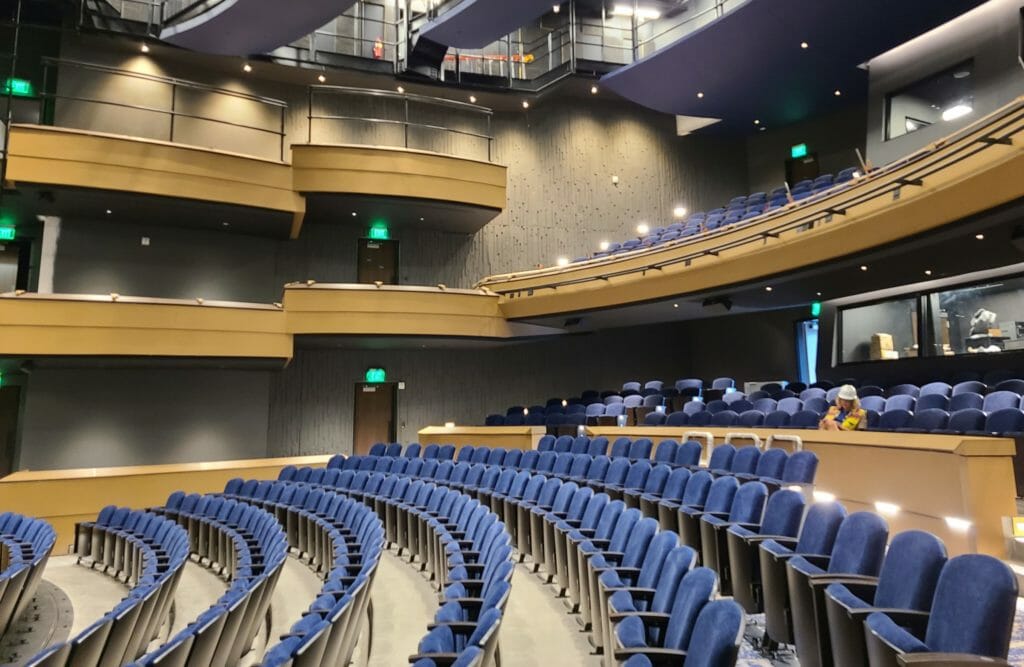 The 500-seat Grand Theatre, shown during construction in September, is the largest of three new performance spaces at Lawrenceville Arts Center.

Aurora leaders are ambitious fundraisers as well, as has been the case for the new facility and for related improvements to existing ones. Though Lawrenceville Arts Center is routinely referred to as a $35 million project, the overall cost exceeded $45 million, counting renovation of the Bobby Sikes Fine Arts Center (the former church that has been the company’s home since 2007) and the connected city parking deck. Aurora raised $1.25 million for those improvements and $4.75 million for the new facility. The city-owned complex will be managed, programmed and operated by Aurora under terms of a unique lease/operating agreement.

While the pandemic did not cause major construction delays for Lawrenceville Arts Center, it did create challenges for Aurora leaders who, due to safety concerns, were left to fundraise mainly through emails and Zoom calls instead of on-site tours.

There is much for contributors and others to see for the first time at this weekend. The tours give Aurora the chance to “thank people because they have been enormously philanthropic during this [pandemic], and we want to honor their gifts,” Pence said. “But then we also want anybody interested to tour through the new building.”

After Christmas Canteen, running November 26 through December 23, Aurora’s recently announced 2021-22 season includes the Gothic thriller Feeding Beatrice, January 20-February 6, 2022; the musical Cinderella, March 10-April 3, 2022; and the farce Swindlers, May 19-June 6, 2022. All will be presented in the Grand Theatre.