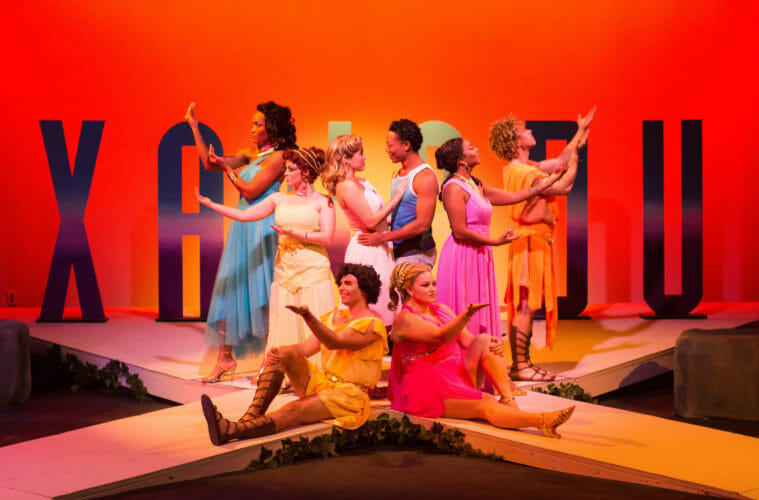 It may not be 1980, but Out Front Theatre believes “Xanadu” is right for the times

Sometimes, a classic theater production feels like the absolute right play at the right moment. Other times, a mirror ball and roller skates can do the trick. After a 19-month break from live theatrical performances, Out Front Theatre Company knew it needed just the right fit as it opened up again, and the campy Xanadu should hit that mark.

The 2007 Tony-nominated musical, with book by Douglas Carter Bean, is based on the 1980 film of the same name with Gene Kelly and Olivia Newton-John, itself inspired by 1947’s Down to Earth with Rita Hayworth. With songs such as “I’m Alive” and the titular number, it follows a young chalk artist in Venice Beach who gets a visit from a muse to inspire him.

Opening Thursday, this version of Xanadu is a co-production with Georgia State University, where GSU students will be understudies during the run at Out Front through November 6 and then will take center stage November 10-14.

Paul Conroy, artistic director of the LGBTQ-themed company, says the musical feels entirely appropriate at this time in the world. “Xanadu is exactly the show that every single one of us needs, even if we don’t [know we] need it,” says Conroy, who is directing the production. “We need to laugh, escape, to see roller skates and mirror balls and goofy characters and a love story. I think we need Xanadu now because we need smiles. And I hope that is what this show gives to people, not looking for anything deep, just looking for people to be able to sit back for a couple of hours and not worry about anything else going on in the world.”

The show was part of Out Front’s canceled 2020-21 season. Conroy knew even before the pandemic hit that the presidential election would get people stressed out. “I learned a long time ago that when we have traumatic events going on around us, theater can be a healing tool of escapism,” he says. That’s what seeing Urinetown  in New York was like for him two weeks after 9/11. “It was just this wacky, absurd comedy, and for a few hours everything was OK.”

Teaching actors the intricacies of roller skating has proven to be the biggest challenge for the director so far, especially people under a certain age who may not have used them before. “They may have worn roller blades but it’s completely different,” he says. “My second rehearsal was four hours of skating, and people would come early and skate in circles and backwards and do whatever tricks they are going to do and then go over their lines and music.”

Everyone in the show is vaccinated and wore masks during rehearsal, but last week took them off so they could hear themselves sing. For audiences, proof of vaccination or a negative PCR test no more than 48 hours old is required, as are masks inside the West Midtown theater when patrons are not eating or drinking.

Like other theater companies, Out Front and its staff had to adapt to Covid last year. Conroy mounted five productions — four one-man shows and the other a two-character one — as well as some cabarets for virtual viewing. All of them bombed.

“It was important to stay engaged with patrons and as many artists as we could, but I don’t think audiences have an appetite for virtual theater unless it’s something on a massive scale like when Disney+ released Hamilton,” he says. 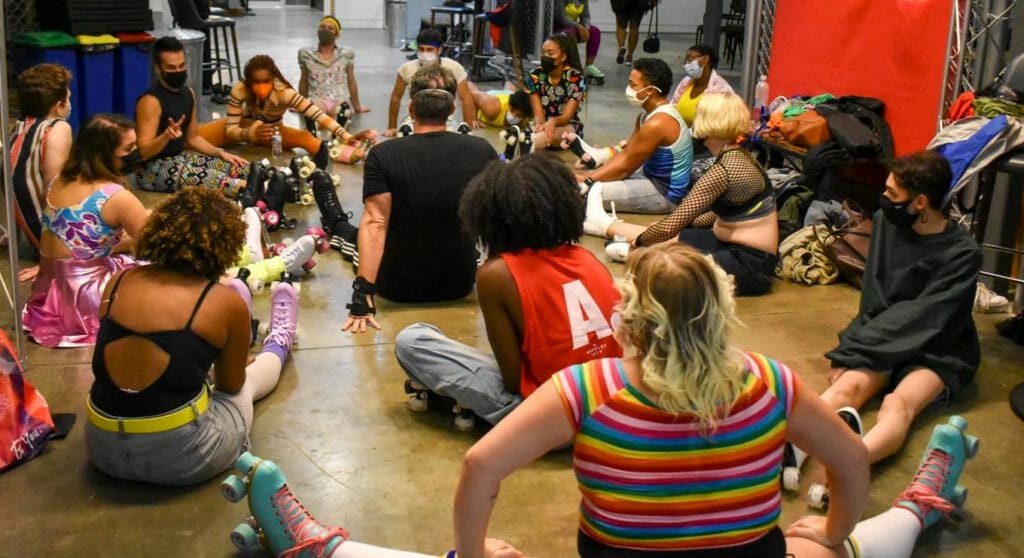 One of the most challenging aspects of readying “Xanadu” at Out Front was getting actors who had never worn old-fashioned roller skates to feel comfortable on their wheels. (Photo by Christine Yen)

“We learned there is no substitute for live theater and there is nothing else like that, the human connection of having people in the theater and live performers onstage at the same time,” Conroy says. “I know I desperately want that and everyone in the show does. You don’t get that in your living room watching a screen.”

The Boys in the Band and Torch Song, originally announced by the company for 2020 and 2021 runs, will be staged at a later time.

Keeping the company afloat during the pandemic has not been easy. Conroy says Out Front has received some grants this year and the company’s landlord has worked with it on a rent reduction. Out Front has also taken out a loan. “We’ve come out OK — not great, but not terrible,” Conroy says. “Costs were reduced a lot but donations dropped off somewhat.”

Conroy has used the extra time since March 2020, when he last mounted a live play, to improve the space and update the company’s facilities and equipment,  including a second performance space in the lobby, new offices, a new green room and a recent interior paint job.

“When people come back, hopefully they’ll see a place that is familiar and that we haven’t just been sitting back for a year and a half,” he says. “We’ve done something here.”