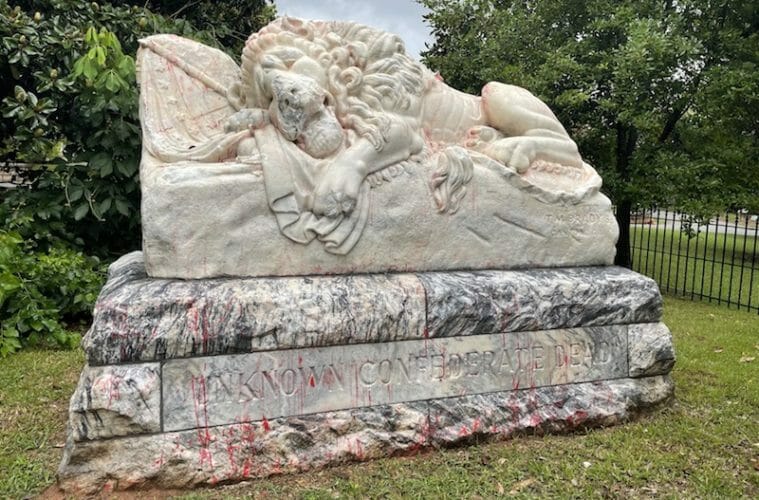 Lisa Tuttle's photograph “The Lion of Atlanta, Oakland Cemetery – August 16, 2021" is part of her Gallery 72 exhibit.

Lisa Tuttle’s Postcolonial Karma, at the City of Atlanta’s Gallery 72 through at least November 30, is an investigation of historical blindness that begins with a lace collar hung on a Congolese sculpture in Brussels and ends with the raw earth where a sculpture has been removed in Atlanta. The artwork in between, selected from two decades of Tuttle’s oeuvre, presents the consequences on two continents of the refusal to confront the legacy of involuntary servitude coupled with racism.

The topic is so enormous that the exhibition could do with more explanatory signage than it gets. In many ways, this is the core of a potential museum show squeezed into the different context of a city-owned gallery in a downtown office building. The exhibit is part of this year’s ELEVATE Atlanta Art Festival. 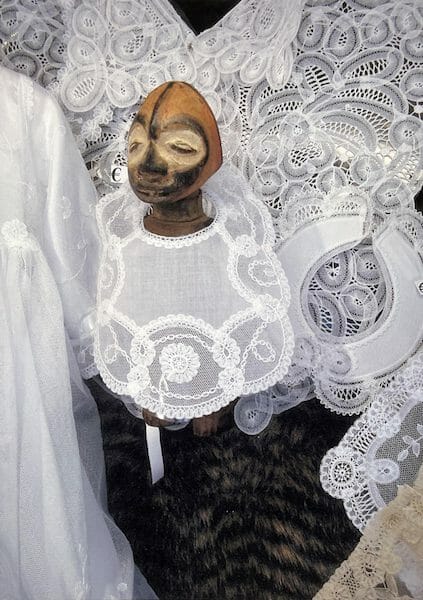 Tuttle’s photo of a Congolese statue dressed in European-style lace vividly portrays the painful yoke of colonialism in Africa.

Tuttle encountered the postcolonial question in Belgium, where she realized the surreal statue-and-lace combination in an antique shop was an indirect consequence of King Leopold’s brutal exploitation of his personal fiefdom of the Congo in the 19th century.

The king’s actions were so openly outrageous that they led to action by the shocked Belgian parliament, which did not truly remedy the situation by transforming the Congo into a government-controlled colony.

Belgian museums have recently tried to confront the implications of this painful legacy, but antique dealers apparently have not, or hadn’t when Tuttle was in Brussels. Tuttle’s annotated photographs from 2008 convey some of this history, but not enough of it.

By 2008, Tuttle was already well along in the process of coming to terms with her own family heritage, as represented in this show by “For Martha,” a 2000-2021 collage of photographs that incorporates a receipt given to her great-great-grandmother for a year’s rental of one of her slaves.

Tuttle went on to create a succession of ironically arranged combinations of contemporary and historical photographs that addressed not only her family legacy of economic and social privilege, but the long history of the South’s unspoken racial arrangements as well.

This phase of her work might be said to culminate in a 2012 diptych titled “Postcolonial Karma — Magnolia Plantation/Pawleys Island Condo,” showing the Magnolia Plantation gift shop at an interstate highway exit and the Old South romanticism of a trio of vintage prints depicting happy, presumably antebellum-plantation African Americans, tastefully matted and framed and installed in a condo in Pawleys Island, South Carolina. The unconsidered consequences of history persist in Pawleys Island just as they do in Brussels.

In 2000, Tuttle was dealing with such issues through artful word-and-image play such as “Dividing Engine,” a three-part piece in which a 19th century drawing of a machine called a dividing engine separates a vintage photograph of nattily-dressed African American men from a photograph of young white men from a decidedly different socioeconomic category. 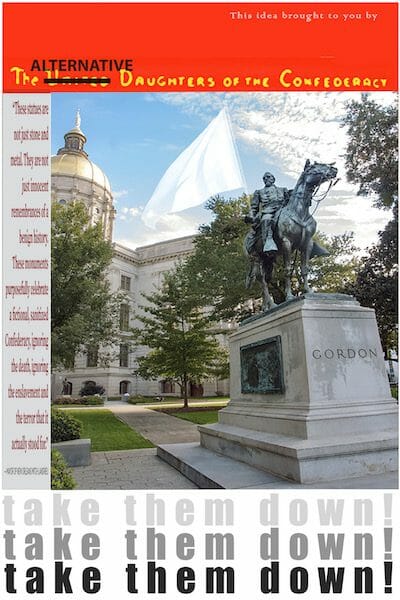 Tuttle’s satirical suggestion that Confederate statues carry white flags of surrender merged with the movement to “Take Them Down.”

By 2019 she was engaging in open satire that proposed that statues of Confederate leaders could be neutralized by making them carry white flags of surrender. In her new work for this show, this concern has evolved into two posters for the Alternative Daughters of the Confederacy that declare forthrightly and unambiguously, “Take Them Down!”

There is much else in the exhibition, from pieces dealing with the Ku Klux Klan’s “Invisible Empire” to an homage to the African American investigative journalist and activist Ida B. Wells, who wrote fearlessly about lynchings and also, among other things, exposed the racial blind spots in the women’s suffrage movement.

A video proposing the removal of the Confederate memorial from Stone Mountain is projected on the front window of the gallery, where it can be viewed from Marietta Street at all hours.