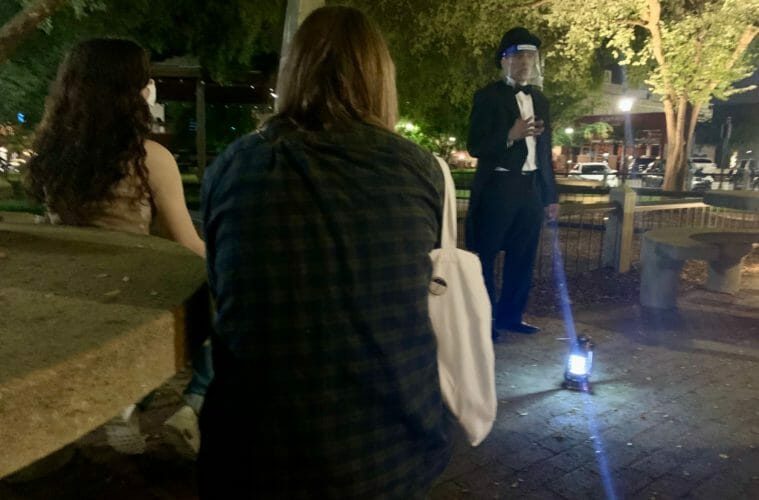 Everywhere we strolled around downtown Lawrenceville before sunset one recent Saturday afternoon, shiny, happy people were flowing through its charming storefront boutiques and restaurant/bars. Then on cue as night fell, they were joined by ghosts, lots of ghosts.

For boasting such an engagingly alive town center, the Gwinnett County seat claims more than its share of specters lurking in the shadows. But fear not, rather than disturbingly frightful, these spirits are such good company that Aurora Theatre has been giving them starring roles in its Lawrenceville Ghost Tours since 2005.

The wraiths are in the spotlight even in months not starting with an O-o-o-h, working up to the Halloween crescendo on weekends from May through September.

So why is this unassuming northern suburb, of all places, so haunted with haints? 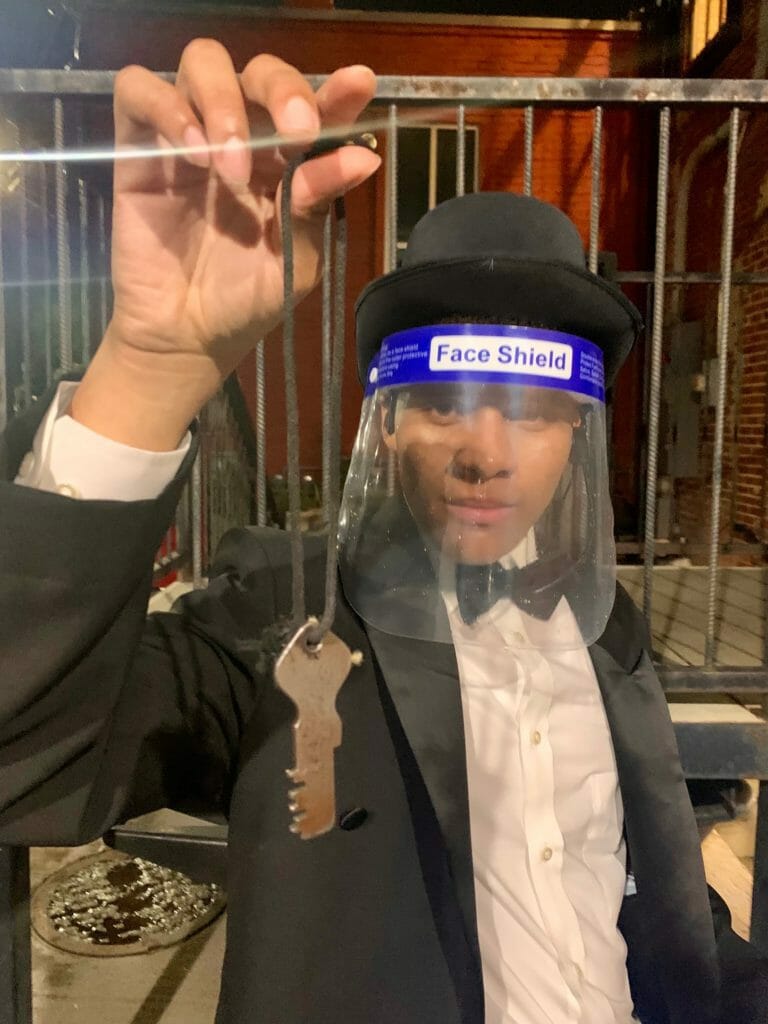 Bobby Bubbly shows the key from the 1832 historic Lawrenceville Jail.

For one thing, Lawrenceville is one of metro Atlanta’s oldest cities, incorporated in 1821, and some of its downtown streets and structures have held onto their historic character. Old spirits, as any Stephen King reader could tell you, prefer old places.

For another, Aurora is one of the metro area’s most civically engaged troupes, Exhibit A being its partnership with the City of Lawrenceville on the $35 million, 59,500-square-foot Lawrenceville Arts Center, set for its grand opening October 22–24. Aurora treats ghost tours as opportunities to take theater to the streets, where it can stretch its storytelling bones while showing off its city.

So it was that we met our guide, impeccably clad in coat and tails and a top hat, just as the weather was cuing up stage-worthy atmosphere in the form of a light drizzle, outside Aurora’s entrance.

“Bobby Bubbly of the Bubbly Brothers,” as he introduced himself, led us over to Aurora’s new courtyard, and climbed up the adjoining city parking deck, treating its half-walls like Juliet’s balcony, to dramatically tell his own stemwinding backstory. Bobby, as his increasingly unbelievable tale went, told us he’s a Georgia-born actor who was discovered performing at an Athens theater with his brother Bo, and that they moved to New York to become stars of stage and, eventually, screen. Back in Atlanta to attend the world premiere of a feature featuring their hoped-for breakthrough roles, they were victims of a train wreck that turned them into . . . well . . . ghosts. Bobby claimed to be 80 or 90 years old, even if the actor portraying him, Evan Phillips, appeared for all the world to be 20something.

Once the tour got moving, bubbly Bobby strode down the street bouncing on the balls of his feet like Ru Paul on a fashion runway. “Bobby Bubbly loves to dance,” he proclaimed. “I just can’t help having a little pep in my step wherever I go!”

Indeed, Bobby’s pep was infectious, even for those not sipping mystery liquid out of a silver flask like him. There was a party going on in Bobby’s head, it seemed, and we were happy to be invited.

On our 90-minute tour, Bobby spun eight super-detailed ghost stories rooted in the city. He started by pointing down East Pike Street toward the Lawrenceville Historic Cemetery a half mile away. “Did you know that the folks who are currently living in Lawrenceville are not allowed to be buried at that cemetery? Want to know why?” he asked. “Folks who are currently living here, they ain’t allowed to be buried there because they’re all still a-l-l-l-i-v-v-v-e!”

Ha! Clearly Bobby had a million of them. But the ghost story he proceeded to unspool in fact chilled because it told of a very a-l-l-l-i-v-v-v-e spirit stirring amid the tombstones. He recounted how paranormal investigator Patrick Burns spent a night seeking spooks in the cemetery with an 11 Alive (Alive, get it?) news crew, all quiet until they got deeper into the graveyard and into the dark. Then they suddenly felt cold rushing up and down their spines and began to notice orbs, beams and flashes of light cutting across their monitors, though when they looked up, they saw nothing extraordinary. 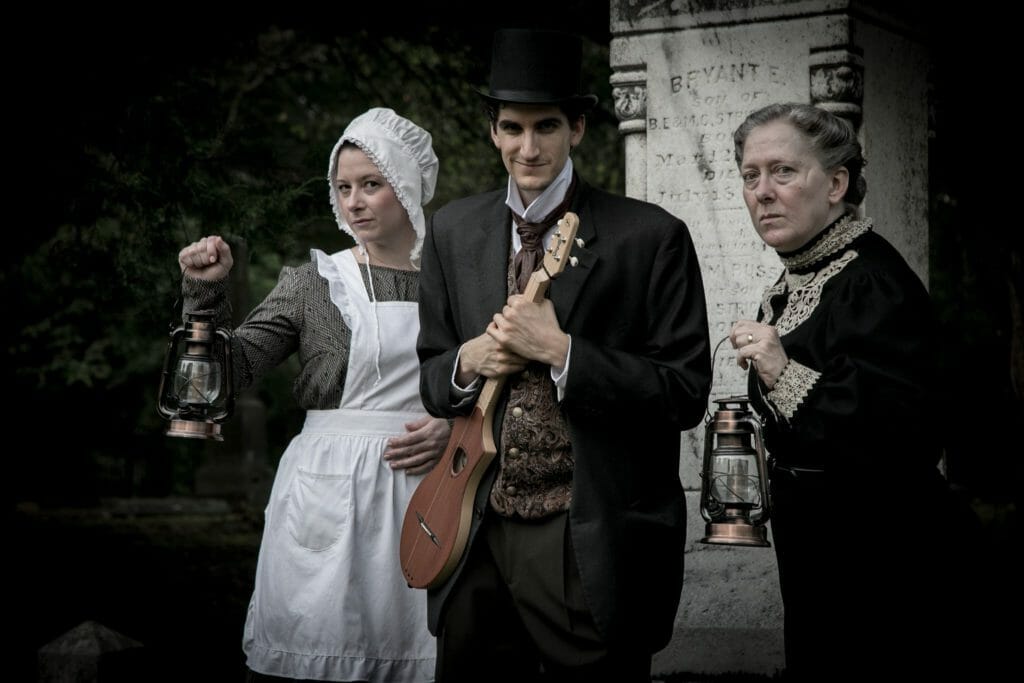 “That’s when death after death after death . . . of all their camera batteries began to happen,” Bobby told us, smiling slyly, having gotten us going with all those “death” mentions. When the TV crew hauled back to the station, he continued, they reviewed the footage and heard a woman’s voice “chattering on and on without end.” Theories were exchanged — perhaps a prior interview had bled through the tapes, or maybe the camera guys unknowingly walked under a radio tower and an unidentified frequency somehow got recorded.

“But that ain’t never happened before,” Bobby said, concluding that the paranormal investigator and TV crew had intersected with “a bona fide spirit.”

Bobby then led the tour to the front yard of Boulder Creek Coffee on busy East Crogan Street, where he spun a lively tale that was more history than spookery, about the hero for whom Lawrenceville is named. Captain James Lawrence was the War of 1812 naval commander who, after becoming mortally wounded by enemy fire, gave his USS Chesapeake crew one of the military’s most memorable fighting orders: “Tell the men to fire faster and not to give up the ship; fight her till she sinks!”

Our guide acted out Lawrence’s death in flamboyant fashion, clutching his chest while grunting the order, then collapsing breathless on the ground. This fabulous flameout received a rousing cheer, and no one mentioned that, well, Lawrence died of his wounds three days, not one breath, after issuing his order.

Breathless ghost tales followed after the tour crossed East Crogan. “These shops were around since the beginning of Lawrenceville,” Bobby said. “They weren’t always pizza restaurants and comic book stores and rumba classes.” Spirits are not big fans of the rumba of change, apparently.

We heard about a porcelain Santa that didn’t want to be moved from the front of an antiques shop after Christmas and, after closing one night, somehow escaped a storage room and sledded back to the store’s window. And about a teenage boarding school kid who took a shortcut through Honest Alley while trying to dodge a tornado and blacked out after encountering dancing skeletons uprooted from the cemetery. 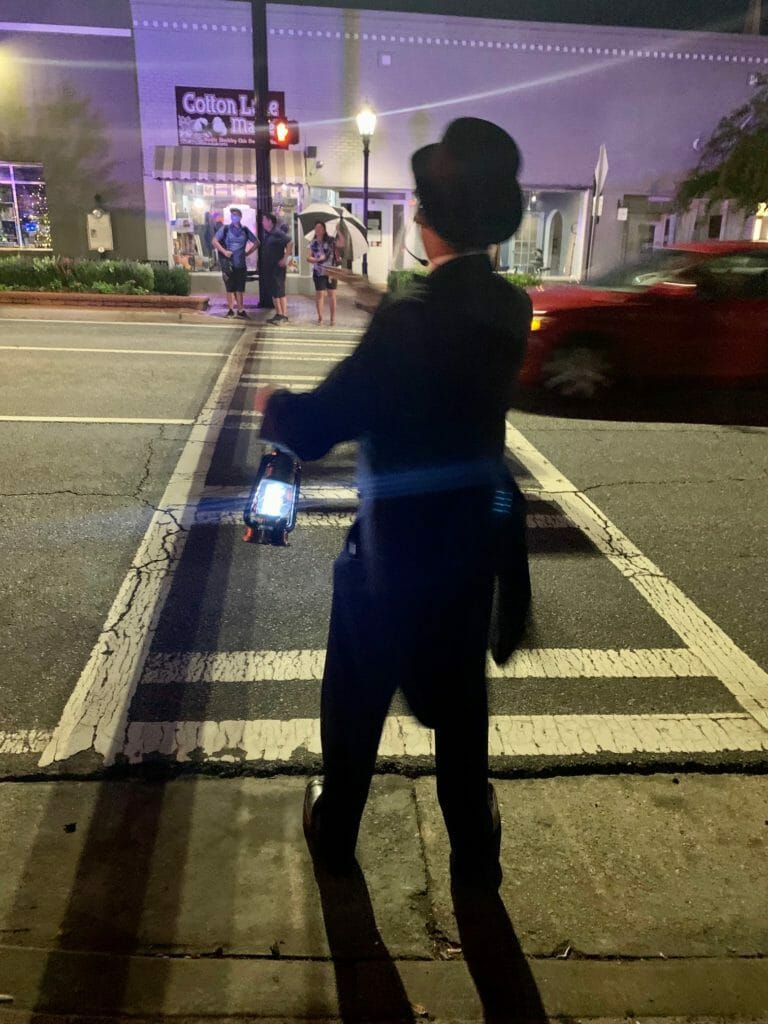 “The Lawrenceville Ghost Tour is . . . on . . . the . . . move,” our guide intoned dramatically each time the group trekked to the next storied stop.

Shortly, we were inching down said Honest Alley, a narrow, dark, dank passage that seemed like it indeed could have been the site of all sorts of early-times shenanigans. Bobby shined his flashlight on the backs of old brick buildings and jokingly called out, “Anybody home?”

After another stop and more tales, we were moving down a different backstreet, Calaboose Alley, just off Lawrenceville’s Historic Courthouse Square. Our destination: the 1832 Lawrenceville Historic Jail, a nondescript one-story concrete building.

Bobby Bubbly turned from effervescent to somber as he spun a true ghost story, about an enslaved man, Elleck, who spent his last days here after being found guilty of murdering his master, Confederate Colonel James Austin.

In Bobby’s spin on the oft-told tragic tale, Austin was in a drunken rage when he grabbed and threatened Elleck’s wife Betsy as the couple worked the fields. Husband and wife fled to nearby woods, splitting in different directions to escape the slave owner. But a fight soon ensued in Elleck’s sleeping loft in which Austin swung his sword wildly at the enslaved man and the weapon lodged in a roof timber. As they grabbed for it, Austin fell backwards, crashing to his death a floor below.

Elleck told his self-defense story the next morning to the sheriff but was arrested, tried and sentenced to death by hanging. Incarcerated in this jail, he attempted to escape by chipping away at the concrete wall with a metal shard. His attempt was discovered, and Elleck was chained to the floor for three days and nights, taking what comfort he could in singing a song of longing for his wife with the lyric, “Betsy, will you meet me in heaven above.” A month after Austin’s death, Elleck was taken to the gallows.

Before Bobby turned the key to allow guests to view the spartan cells, he told us that sometimes he hears voices emitting from the walls that cause him to consider the “other folks who had unfortunate lives like Elleck did.”

We were letting that sink in while other members of the group peeked inside the dim jail, when a young boy sidled up to Bobby and asked, “Do you ever lose your voice?”