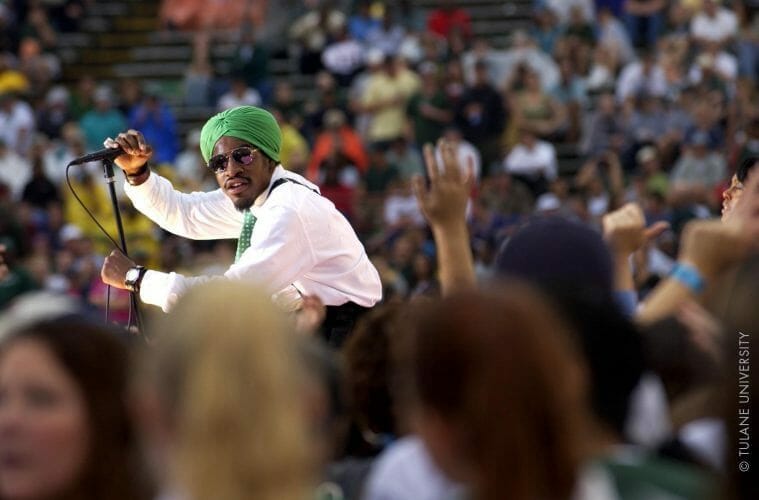 Matt Hobbs: “Dancing on the Hillside”

You probably recognize Atlanta-based songwriter Matt Hobbs from his long-standing stint as music director and improviser at Dad’s Garage Theatre Company. Along with providing the lightning-fast music during Dads signature improv shows, he’s composed songs for the theater’s productions of Woman of the Year and Black Nerd.

Here, he recounts a charming tale about how coffee might have been first discovered, written as an homage to his favorite local Atlanta coffee shop, Dancing Goats. The song officially releases next week, but you can get in early on the amped-up cartoon goat action here. Like the New Orleans-born Hobbs, Dancing Goats is a transplant to this city. It’s now been here so long it’s considered local. The shop was founded in the late 1980s as coffee roasters Batdorf & Bronson in Olympia, Washington, establishing its first stand-alone coffee bar in Decatur in 2001.

Hobbs doesn’t just write songs about goats, though, he also writes songs about dogs in a series called “Puppy Songs.” This penchant for charming ditties is likely what landed him Readers’ Pick Best Songwriter in Creative Loafing’s 2019 Best of Atlanta.

Mariah the Scientist is no fan of Eros or his bow, it seems, and not just for this video in which she flees furiously across a frozen field, her long red coat vibrant against the snow, evading cupid’s arrows.

The singer recently said in a Nylon interview that her new album, Ry Ry World, originally had a different title — Little Monster. “I was referring to Cupid,” she said. “I felt like when you get shot by Cupid, and you fall in love, it’s not supposed to be sad, but it hurts. I can’t tell you how many times in a relationship it clearly [hasn’t] been a good situation, but I wouldn’t want to be anywhere else. That’s the point of that cover.”

That heartbreak comes through in myriad ways across the album’s 10 new tracks, including guest features from fellow Atlanta artists Young Thug and Lil Baby. The 23-year-old singer, deemed by Pitchfork as “one of modern R&B’s realest talkers” and “one of its most vivid storytellers,” has been getting back into touring and playing live gigs, including upcoming stops at major festivals in Chicago, Los Angeles and Spain.

The year 1996 was a big one for Atlanta. And no, not because of the sporting event held every four years that happened there. Guess again. That year saw the release of OutKast’s sophomore album ATLiens, which firmly established the duo as one of the world’s most significant hip-hop phenomena. A duo that was cooler than [the Coca-Cola] polar bear’s toenails. A duo that proved the South had something to say.

In honor of its 25th anniversary next month, the album will be reissued with 14 additional instrumental tracks. The title song is our Vintage Track of the Week.

Andre Benjamin and Antwan Patton, aka Andre 3000 and Big Boi, started as precocious Southern teens trying to find a foothold in an industry completely dominated by New York and L.A. Their debut, 1994’s Southernplayalisticadillacmuzik, earned them the surprise win as Best New Rap Group at the 1995 Source Awards. Big Boi reflected on those heady days of rising fame in a recent interview, saying,“You know, you got two teenagers from Georgia who hadn’t been past South Carolina or Florida seeing Europe, and the West Coast and New York. It kind of broadened our horizons. The world is bigger than where you live.”

After their straight-out-of-the-gate success, Andre and Big Boi were able to exert more creative control on their second album. That’s evident from start to finish on the carefully constructed ATLiens. With its iconic singles, including this title track, “Elevators (Me & You)” and “Jazzy Belle,” the album went double-platinum and sold more than 2 million copies.

It kicked off what would be a meteoric ascent as the so-called “Beatles of rap,” who were inducted into Atlanta’s new Black Music and Entertainment Walk of Fame earlier this year. (Shout-out to comedian Ron Funches, who this year tweeted: “When society admits OutKast is better than The Beatles, then we can truly start healing.”)

The Fab Two split up in 2007 but reunited in 2014 to commemorate the beginning during three glorious sold-out shows in Centennial Olympic Park, a place that was created — almost as if fate knew — for the 1996 Olympics.