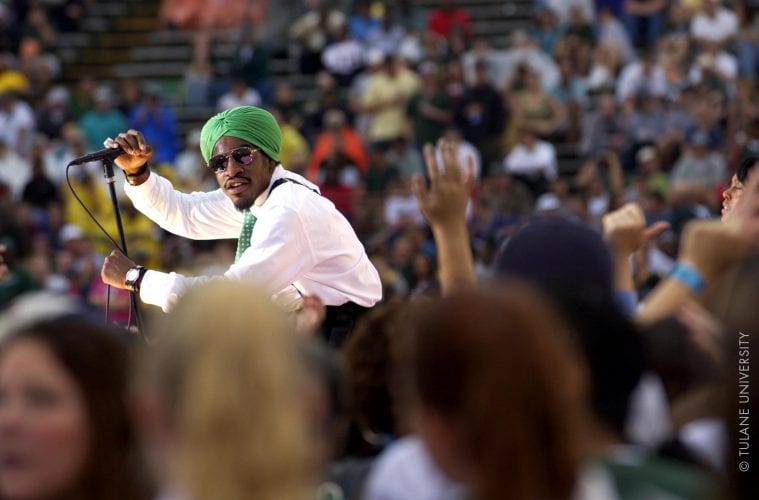 Editor’s disclosure: Both of the subjects of this article, Dr. Joycelyn Wilson and Dr. Regina N. Bradley, are contributors to ArtsATL.
— For Dr. Joycelyn Wilson, the a-ha moment came in middle school. The Atlanta native remembers being a student at Southwest Middle School (now Young Middle School) when the Brooklyn trio the Fat Boys beatboxed over the intercom during the morning announcements. It was that visit, along with stops on the campus by Whodini, Kurtis Blow, New Edition and the Bronx-based dance crew New York City Breakers, that stuck with Wilson.

Growing up in what she calls the “formative years of Atlanta hip-hop,” Wilson found herself enthralled with the culture, and its various forms of expression. That her teachers were using hip-hop as a means to connect with the students is something that followed her when she later became an educator.

Well, that and the breadth of depth and sense of Afrofuturism she found on OutKast’s sophomore album, ATLiens. That album and her obsession with Tricia Rose’s 1994 book, Black Noise, hailed as one of the first books to approach hip-hop culture in a scholastic way, served as the genesis for her current area of study.

“It was like there’s something bigger going on here, and I want to explore it,” Wilson says. “I said when I get my PhD I want to study the ways that hip-hop can be used in the classroom and all of the pedagogical explanations associated with it.”

Though Wilson is no stranger to being a hip-hop scholar, it’s her current class as a visiting professor at Georgia Tech, “Exploring the Lyrics of Outkast and Trap Music to Explore Politics of Social Justice,” that’s brought her newfound attention. It’s an extension of her discussions on what she calls the “OutKast Imagination” and the group’s penchant for “message music.”

“When I say ‘message music’ I’m talking about messages of developing knowledge of self, really engaging stories that allow a person to reflect on their own life and what’s happening around them socially,” she says.

More specifically, according to the university, the goal of the course it to “reimagine the pillars of Hip Hop, interrogate its social politics, investigate its notions of Black joy and self-expression, and discuss Atlanta’s role in Hip Hop.”

It might sound like a gimmick to the casual academic, but Wilson’s credentials outside of the classroom speak to her being the right voice to connect with kids barely old enough to drink. The Emmy-nominated film producer is an alumni fellow of the Harvard Hiphop Archive, and a former high school math teacher, who has written for music and culture publications such as XXL and The Fader.

She’s dead serious about class time. No social media during class means no cell phones allowed. The 25 students in the class are told to open their laptops when it’s time to decode lyrics on Genius.com for a critical reading exercise. Oftentimes, the group’s drawing parallels between literary texts and Southern rap’s classics and current zeitgeist.

The first text the students study is Leroi Jones’s Blues People: Negro Music in White America, as it relates past and present iterations of the trap, and the rich of history of Black orators who’ve carried on the tradition now and then. They’re reading that while simultaneously dissecting tracks such as Goodie Mob’s “Thought Process” and “Free,” with a deep dive into Andre 3000’s verse on Travis Scott’s “The Ends.” Her class extends beyond OutKast and locally grown-turned-international success stories such as Future and 21 Savage to exploring voices outside the Perimeter as well. “Ice Cube is one of the most beautiful storytellers in writing, period,” she says. “Those stories could come from his own experience or just things he saw and that’s what I mean by message music.”

A means to further study the messages and artifacts within music is through technology. Wilson’s class will also make use of virtual reality (VR) via Virtual Four Four, an interactive storytelling and publishing platform that curates social justice narratives used to archive collections inspired by hip-hop for academic studies. The goal is for the students to create their own archives.

Wilson believes hip-hop culture itself is a technological innovation, “pulled from so many things to create itself.” This connection is evident in hip-hop archives popping up everywhere from Harvard to William and Mary, she says. In connecting her students with the VR technology, she can close any learning gaps caused by a lack of access.

“My mother wouldn’t have been able to take me up to the Harvard hip-hop archive,” she says. “I want that kid who may not be able to travel physically to teleport themselves into it and still be able to experience it.” Dr. Regina Bradley’s a-ha moment came when she was in grad school at Indiana University. Her professors weren’t hip-hop scholars per se, but in the African-American studies department they were getting heavy doses of the aforementioned Rose and Marc Anthony Neal. Though eager to soak up hip-hop as intellectual text, she couldn’t help but feel as though the content was biased.

“My friends and I were like, ‘Where does the south fit into this conversation,’” she remembers asking her professor. The professor fired back, “So, what are y’all going to do about that?”

In the time since, Bradley, who was Nasir Jones Hip-Hop Fellow at Harvard, has made it her life’s work to connect the dots between Southern rap music and what she commonly refers to as the “academy.”

The assistant professor of African American Literature at Armstrong State University in Savannah has gone viral with news of her OutKast-focused course, “Chronicling Stankonia: OutKast and the Rise of the Hip-Hop South.” It’s also the name of a book Bradley has been working on for years.

It’s not the first time Bradley, aka the “Red Clay Scholar,” has taken the time to break down OutKast’s music to a science. One of the most notable approaches came via her “OutKasted Conversations.” The video interviews scholars, writers and fans celebrating the group’s 20-year reunion by exploring their past, present and future significance.

The idea behind Bradley’s course is that OutKast, like any text, can be read, broken down and discussed over what she refers to as intellectual “cafeteria lunch table conversations.” Going in chronological order from Southernplayalisticadillacmuzik up to Idlewild, the students use texts from writers such as Kiese Laymon (Long Division, How to Slowly Kill Yourself) and Jesmyn Ward (Where the Line Bleeds) to further their understanding of the Black experience.

“The music and class are highlighting these working-class Black communities in Atlanta that have been intentionally pushed to the side in favor of showing Atlanta as this progressive, transient city that makes it comfortable for white folks,” Bradley says. A whiteboard from one of Dr. Bradley’s classes.

Like any great orators in Black history, Bradley says the music of OutKast and prominent Southern rap artists is rooted in struggle, most notably the Civil Rights Movement. For her part in trying to explain that Southern rap’s — and to some degree hip-hop’s — roots don’t actually stem from New York City (the birthplace of hip-hop), she’s been called a “revisionist.”

“Whenever you de-center New York, folks get offended. Whenever you listen to Southern hip-hop there’s always a reference to the movement in a way that New York hip-hop doesn’t,” Bradley says. “They’re like, ‘you’re trying to say hip-hop started in the South?’ Yeah we bit on y’all for a little bit but that’s not where our narrative starts. If that makes me a revisionist, well shit, I’m a revisionist.”

For both Bradley and Wilson, they’re seeing more audiences and acceptance for what they’re trying to bring to the academy. “It’s become an easier sell because it’s a movement now,” Wilson says. “There’s so much value around using hip-hop as an imaginative resource to talk about the human perspective.”

Though Wilson is a visiting professor at Georgia Tech, she says there’s already been requests to keep her course going. The same is true for Bradley, who says classes on Three 6 Mafia, legendary duo 8Ball and MJG and Texas’s chopped and screwed history should all deserve love from the academy.

Bradley applauds Wilson’s brilliance in bringing VR technology to the fold, expanding further understandings of texts, as she says she believes the two intellectuals share a common bond.

“We need to have the South in these conversations,” Bradley says. “You can’t keep overlooking the significance of Southern Black folks, Southern Black genius.”