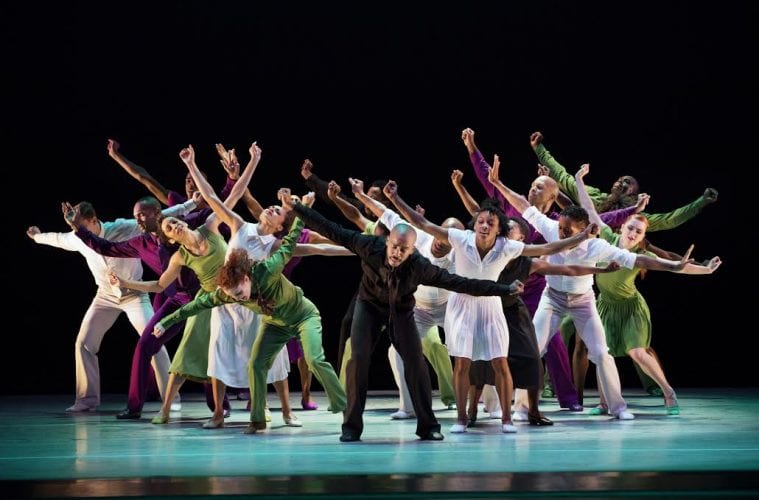 “It’s not so much a work about revolution, but about the evolution of our individual selves,” says Alvin Ailey company member and choreographer Hope Boykin of her latest piece, r-Evolution-Dream. “I wanted to acknowledge the need for some type of revolt in our lives. We must stand up, fight to make changes, or fight for our beliefs — but the real challenge and battle must start within us. How can I truly be a force for change through my art or anything else, if I have not worked toward my best self?”

One of several works of Alvin Ailey American Dance Theater to highlight social issues, r-Evolution-Dream. will be performed on the “Ailey Jazz” programs during the company’s upcoming stay at the Fox Theatre February 15–19. r-Evolution-Dream. celebrates the legacy of Dr. Martin Luther King, Jr. and was inspired by Boykin’s visit to the Center for Civil and Human Rights in 2014. The genesis of the piece occurred as Boykin took in an exhibit showing footage of the procession of King’s casket through downtown Atlanta while audio of his voice played. “I felt I wanted to start moving,” she says. “His words did more than resonate with my spirit, and the ringing cadence was a call to movement. I wasn’t entirely sure what would happen, but I did know that I needed to find a dance studio immediately and get to work.”

With this artistic impetus, Boykin approached the choreography in a way that was new to her. “I usually start with movement. Movement is abstract and only has meaning within context of story and atmosphere,” she says. “This time, Dr. King’s voice served as my context. I created the work from many sermons and speeches. Music was created after the fact. I liked this process. It was different for me, but it was also a very honest pursuit.”

Creating a piece on the company she dances for — as she has with her previous choreography — provided a nurturing and supportive environment for shaping a new work. “Choreographing and working so closely with people you know almost as well as you know yourself is a blessing,” she says. “The dancers and the entire organization have been supportive of me from the beginning. Failure is not an option when everyone has your back.”

For the music of r-Evolution-Dream., Boykin turned to longtime collaborator Ali Jackson, principal drum chair with the Jazz at Lincoln Center Orchestra, whom she describes as a “powerful composer, brilliant musician, and loyal friend.” Boykin additionally desired the work to include the power of words. “I wanted to make sure I included the level of inspiration I received from Dr. King, his proficient knowledge, and his need to press toward the prize, the dream,” she says. Her piece incorporates recordings of texts by writers that King admired including Shakespeare, David Malloch, Isaac Watts, William Cowper and James Weldon Johnson as well as notes Boykin made while studying King’s work.

To give voice to these writings, Boykin reached out to her friend Leslie Odom, Jr., the Tony Award winner of Hamilton fame. “I am, and have been, surrounded by friends who selflessly support me in all of my creative expression,” Boykin says. “I mentioned to Leslie that I had an idea about creating a new work and he let me know that he would do whatever he could to help. He had an extremely busy work schedule, but he carved out time to come and watch rehearsals, record the voiceovers, and show support in ways only a friend could.” Boykin says it’s her prayer that audiences will find themselves — and inspiration — in r-Evolution-Dream. “Whether or not they see something they relate to, or just tap their feet to the music, walking away with a feeling of hope is more blessing than I deserve,” she says. “I believe we are all products of our environment, upbringing, and culture. If I can share my experiences on a platform — or stage — and remain positive and uplifting while encouraging further thought, then I will be pleased.”

Alvin Ailey’s programs at the Fox Theatre will also feature choreographer Kyle Abraham’s Untitled America (2016) which examines the effect of the prison system on African-American families, and a new production of Masekela Langage (1969) by founder Alvin Ailey which addresses the Apartheid era in South Africa and racial violence in 1960s Chicago. The company will additionally celebrate the recent centennials of the births of jazz legends Dizzy Gillespie and Ella Fitzgerald with Billy Wilson’s The Winter in Lisbon (1992) and artistic director Robert Battle’s Ella (2016). All programs will conclude with the company’s signature work depicting African-American heritage, Revelations (1960).

Ailey’s visit to Atlanta will include outreach events through Destination Dance, the company’s new, year-long initiative for local students, audiences, artists and teachers in partnership with Atlanta Ballet, Atlanta Ballet Centre for Dance Education, the Fox Theatre, Spelman College, the Center for Civil and Human Rights, the High Museum of Art, Rialto Center for the Arts, AREA, Dance Canvas and ELEVATE.