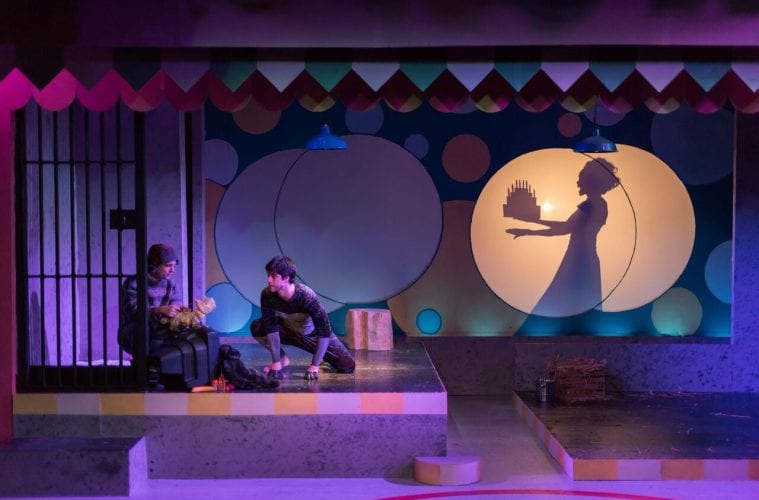 Review: Synchronicity’s “The One and Only Ivan” a requiem for Atlanta’s fierce, beloved gorilla

A beloved Atlanta celebrity gets his due in Synchronicity Theatre’s charming children’s production of The One and Only Ivan running through February 21. Ivan the Gorilla lived at the Atlanta Zoo from 1994 to 2012, and not only was he a handsome and endearing fellow, but he arrived in the city with a moving backstory. Captured from the wild in the Democratic Republic of Congo, Ivan spent 27 years in a dreary enclosure at a struggling shopping center in Tacoma, Washington. Animal welfare activists campaigned for his release, and he ended up briefly placed in a Seattle Zoo before finding a more permanent and presumably better home at the Atlanta Zoo, where he lived to become one of the oldest gorillas in captivity before his death in 2012.

All of this and more was given imaginative life in fiction in Katherine Applegate’s 2013 Newberry-winning novel for young readers, The One and Only Ivan. Playwright James E. Grote’s straightforward two-act theatrical adaptation, which had its world premiere in Chicago in 2015, arrives in Ivan’s hometown via Synchronicity’s appealing production.

As the play opens, we learn that Ivan (Chris Hecke) has lived at the Big Top Mall for years, stuck in a cage but somewhat complacent with his position as the major draw for visitors to the cheesy shopping center. His staid life changes when his best friend, a wise old elephant named Stella (Precious West), dies due to the neglect of the mall’s greedy manager Mack (Jeffrey Allen Sneed). As a dying request, Stella asks that Ivan care for the newly arrived baby elephant Ruby (Renita James) and to get her to a zoo where she can find a better life. With the help of the mall’s janitor (Benjamin Dewitt Sims) and his daughter (also performed by James; the play utilizes a small cast in which the actors play multiple roles), Ivan creates a drawing for a billboard that convinces visitors that the animals would be better off in a zoo than at the mall.

It’s hard not to be won over by Synchronicity’s enchanting production, which features moving incidental music by Atlanta-based musician John Burke (Burke’s unrelated album of piano music Orogen was up for a Grammy at Sunday’s awards ceremony). Kids seemed unreservedly thrilled by the show, but as an adult, I often found the action and characters too plainly derivative of E.B. White’s Charlotte’s Web, with Ivan as the innocent and threatened Wilbur and Stella as the gentle, wise, philosophical but doomed Charlotte. Still, Ivan manages to inherit many of that story’s strengths — its theme of friendship amid the cycle of life, death and loss — and we end up cheering for Ivan and mourning for Stella, just as we do for the characters in the classic barnyard tale.

As in Charlotte’s Web, one of the themes is human cruelty to animals, how human greed and negligence can harm the lives of animals and how kindness and care can improve them. It’s a worthy lesson for children, and it’s well told here, and for the most part, it’s tastefully stated. But I was nonetheless surprised by the extent of the cruelty depicted. Generations of kids were once traumatized by the death of Bambi’s mother; but apparently creators of children’s entertainment have upped their game a bit. Here, whole fuzzy families — mothers, fathers, brothers and sisters — are killed both onstage and off. When a new character, a cute baby elephant, arrives on stage, she promptly and somewhat dispassionately announces that her entire family is dead.

Ivan himself has post-traumatic stress disorder and repressed memories of familial slaughter, and we soon learn that even Ivan’s fun, wisecracking sidekick, a dog named Bob (Sneed in one of the play’s best roles), tells jokes merely to mask the pain of being the sole survivor after he and his entire unwanted litter of brothers and sisters were tossed from a truck by callous humans. Kids in the audience seemed to handle all of this well, but if I had seen Ivan at the right (or as my parents would probably have it: the wrong) age, I would have been a wreck.

When I pitched this story to my editor, he mentioned how he was once charged by Ivan in his living quarters at the Atlanta Zoo and how grateful he was there was a set of bars between them. Perhaps this was offered as an account of a celebrated personality whose behavior in an actual encounter contradicts a spotlessly benign public image, something we as journalists encounter from time to time. Having seen the play, however, I’m still partial to cutting Ivan some slack. He’d clearly been through a lot. [Editor’s note: And so am I; I broke a cardinal rule when I walked up behind Ivan and startled him; he only behaved as a gorilla should.]

In the end, any bad behavior is forgiven. In Synchronicity’s winning production, Ivan remains a gorilla to root for.