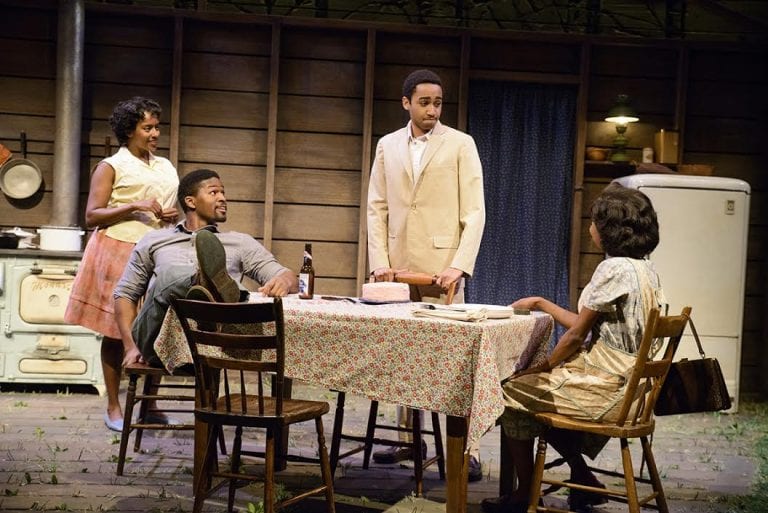 Review: Alliance’s poignant “Too Heavy For Your Pocket” delivers a story for then . . . and for now

During the summer of 1961, a few months after the Supreme Court ruled that segregation on public transportation violated the Constitution, hundreds of young men and women, both Black and white, road buses through hot beds of racism in order to fight for the right to sit anywhere they wanted to on the bus. They were labeled as rabble rousers, and throngs lined up as the buses passed through main streets to throw rotten produce, glass bottles and sometimes homemade bombs at them. Often the Freedom Riders were arrested and thrown into jail for weeks, and sometimes months, subjected to deplorable conditions such as no beds, dirty water, maggots in their food and being branded like cattle for singing Negro Spirituals.

This is the experience that Bowzie Carter describes in his letters from a Mississippi jail in Jiréh Breon Holder’s play Too Heavy for Your Pocket, on the Alliance Theatre’s Hertz Stage through February 26. Set in Mount Juliet, Tennessee, two young couples — Bowzie (Stephen Ruffin) and Evelyn (Eboni Flowers), and Tony (Rob Demery) and Sally (Markita Prescott) — beat the summer heat over laughs at dinner in Sally and Tony’s kitchen.

The mood is jovial in the beginning as the foursome celebrates a very pregnant Sally’s graduation from glamour school and Bowzie’s acceptance to Fisk University. Finally, lounge singer Evelyn will be able to put her feet up and have a litter of babies and mechanic Tony can save up to buy Sally a house. But when Bowzie decides to leave college to become a Freedom Rider, his choice creates a rift in his marriage and friendships.

Inspired by the playwright’s grandmother and the Black Lives Matter movement, Too Heavy for Your Pocket won the Kendeda Graduate Playwriting Competition in January and also received the Laurents/Hatcher Foundation Award from Roundabout Theatre in New York where it will be produced as a part of the 2017–18 season. Holder is the playwriting fellow of the Department of Theater and Creative Writing at Emory University, and this is one of the better Kendeda plays of the last few years. Despite a slow beginning and a shaky ending, Holder’s otherwise tight writing and expert comedic timing, a simple set and four-person ensemble make this play ripe and ready for regional theaters across the country to produce for seasons to come.

This young ensemble cast delivers dynamic performances under Margot Bordelon’s impeccable direction, keeping the tension high throughout the play but also allowing for moments of comic relief. The deep sisterhood between Flowers’ and Prescott’s characters is beautiful to watch, especially when they talk about the sacrifices they have to make so their husbands can become men. The moments when all four are onstage seem like these people have been friends for years in real life. They all show their chops in the scenes where they are “playing” church and in the phone conversations with Bowzie from jail. Kudos for the impact of these scenes also go to costume designer Sydney Roberts and lighting designer Liz Lee.

Holder tells a rarely seen civil rights story with the intersectionality of Christianity, class and sexism. Bowzie is a poor black man who does not have educated parents to bail him out of jail like many of the students who participated in bus protests. This raises his stakes in standing up for equality, layered with the dissent from his friends and neighbors who believe it is safer to keep his head down and get an education than risk imprisonment or death.

Another important element of this play is that the local church is having a revival just before Bowzie leaves. Historically, the Black church has been a beacon of hope and a pillar in the community, but in recent years the church has not taken a stance on the Black Lives Matter movement. What was once seen as a place of hope and ground zero for developing strategy is in some ways the antithesis of progress in modern times. This contrast between the Black church of then and now begs the question: what is the role of the church today?

In Too Heavy for Your Pocket, Holder weaves together simple but hefty dialogue in a way that blends the styles of Lisa D’Amour’s Detroit and August Wilson’s Two Trains Running. Furthermore, he tells a poignant story of the 1960s that does not involve Black people doing domestic work for white people. Holder and this dynamic cast and creative team deliver a production that resonates, keeping the characters empowered even though they are poor. He allows his characters to tell their stories in their words, and two things come to the forefront: the advancement of colored people did not necessarily include the advancement of Black women, and it has been too hard to be Black for too long.