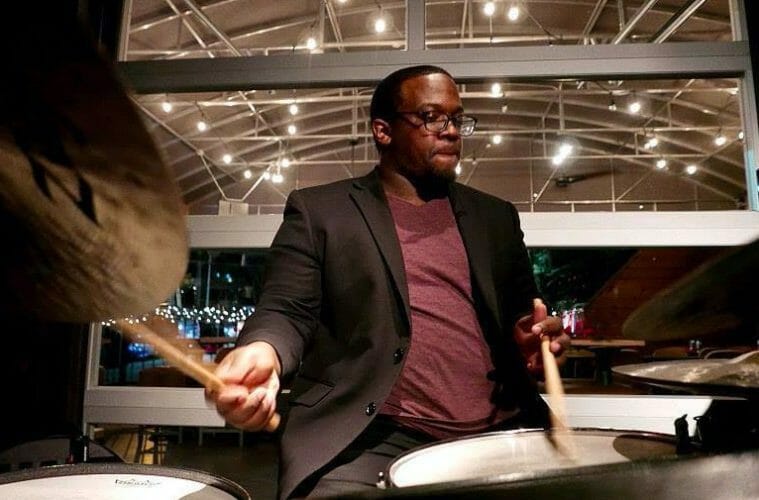 With the Count Basie Orchestra, Robert Boone sits in a drum chair once occupied by some of jazz music's greatest drummers. (Photo by Vincent Tseng)

Counting the great drummers of the Count Basie Orchestra is like counting stars. They are multitudinous. Buddy Rich played for the legendary bandleader. Jo Jones did, too. Gus Johnson, Sonny Payne, Shadow Wilson and Duffy Jackson all sat behind drum kits for the orchestra, making sure the band swung. Speedy Jones, also. Butch Miles. Multitudinous.

You can add Robert Boone to the list. The Atlantan, currently in his third year teaching jazz percussion at Georgia State University, is their latest star, ever-rising, playing drums for one of the most well-known bands in the history of jazz. Though Count Basie, one of the seminal figures in jazz music, died in 1984, his music — and his namesake orchestra — lives on. The band has just released a new album, Live at Birdland, recorded at the legendary New York City jazz club.

Boone’s quest to be a jazz drummer started, in part, with the band A Tribe Called Quest. The youngster was into hip-hop. He’d hear a hip-hop song and wonder what were the original songs the band was sampling. “It led me to discover jazz artists like Miles Davis, Herbie Hancock, Ahmad Jamal, and Oscar Peterson,” he says. “Jazz really drew me in.”

Boone continued to be drawn to the artistry of jazz and drumming. It began to color his life’s canvas. He played drums at church (his father was the minister of music) but he wanted to find other ways to play a drum set. He joined his high school jazz band. Inspired by the likes of John Coltrane (“A Love Supreme is really one of the first records where I learned all the possibilities of jazz.”), he played more and more, further drawn into the possibility of making music a career. 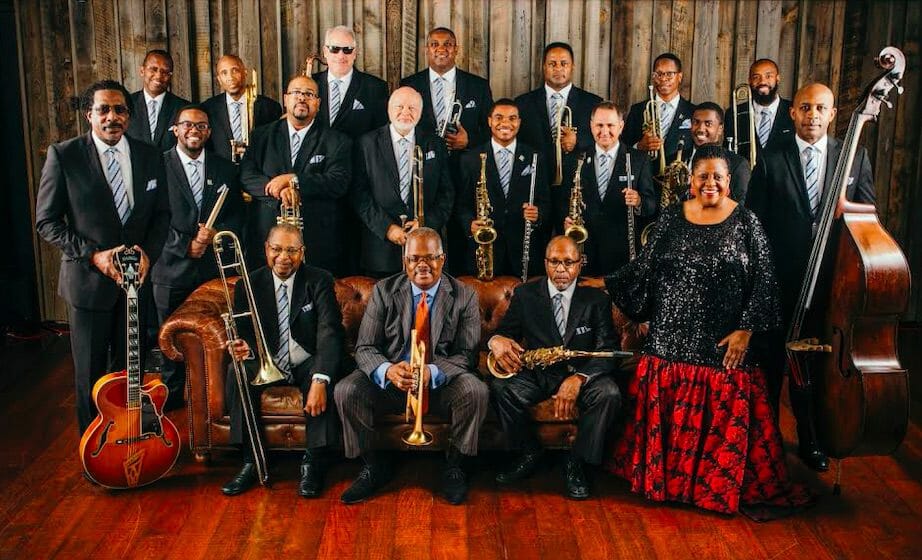 The modern Basie Orchestra just released a live album. Boone is in the second row on the left side, standing next to guitarist Will Matthews.

He went to Kennesaw State University for his undergraduate work in music performance and then went to Florida State University to pursue his Master’s in jazz studies. Scotty Barnhart, Count Basie Orchestra’s director and another Atlanta native, just happens to be on staff at FSU and soon realized that Boone could play Basie music and play it well. “The audition was very overwhelming,” Boone says. That tryout was a month long. There was one week in New York, two weeks in Japan, and a final week in Kansas City. “I was able to settle in,” Boone says. “I continue to learn so much from this band at every show.” He has since been able to collaborate with leading artists such as Eric Reed, Marcus Roberts and Dee Dee Bridgewater.

Boone knows the list of former Basie drummers includes several all-time greats. He’s met some former Basie drummers and they have been supportive. “I’m very blessed to be in this position and I don’t take it lightly or for granted,” he says. “It is up to me to pay respect to those that came before me, but I need to leave my own stamp on this band for this era.”

The recently released Live at Birdland will undoubtedly help that. It was in the summer of 1961 that the Count Basie Orchestra played the famous jazz club. A live recording for two of those nights became Basie at Birdland, which is considered one of the great live recordings of a big band. Almost 60 years later, in January of 2020, the band returned to Birdland to record again. This happened just months before the Covid-19 pandemic shut everything down. “To grow up listening to Count Basie records in high school, and now to be on an album with the same orchestra is a dream come true,” Boone says.

Though he’s living his dream, he also knows it’s his job to be himself within the magic of musicianship he now finds himself in. “I think I am bringing exactly what the band needs at this moment in time,” he says. “I want to truly be myself and support the band to the highest of my abilities.”

How much higher can a star rise? Aside from working with the band — a studio album is forthcoming — and recording and touring with other Atlanta musicians, he’s excited about his teaching job at Georgia State University. “This presents a great opportunity for me to share my knowledge and experience to the next generation of great musicians,” says Boone. Drum sticks in hand, his quest is not yet done. It’s perpetually just beginning.

Jonathan Shipley is a freelance writer based in Hapeville. His writing has appeared in such publications as the Los Angeles Times, National Parks Magazine and Earth Island Journal.