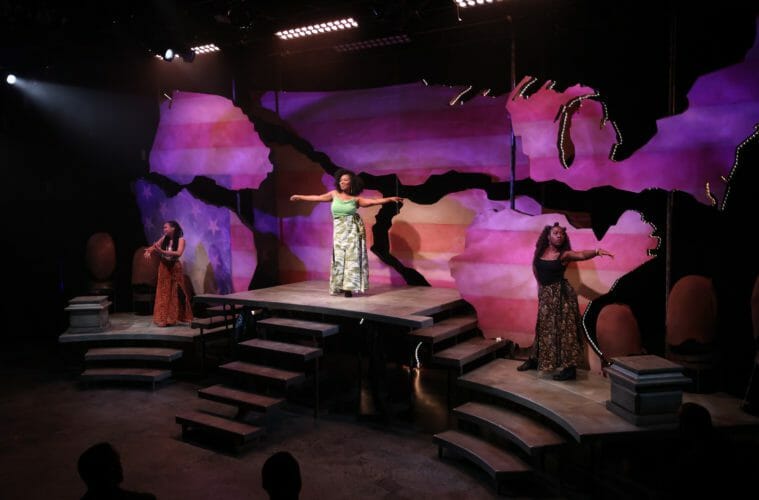 Review: “Hands Up” at the Alliance adds nuance to police brutality conversation

“Does it always have to be about race?” In the Alliance Theatre production of Hands Up: 7 Playwrights, 7 Testaments, in the Hertz Theatre through Oct. 31, the answer is a resounding yes.

The production consists of seven short plays written by Nathan James, Nathan Yungerberg, Idris Goodwin, Nambi E. Kelley, NSangou Njikam, Dennis Allen II and Eric Holmes. The plays are inspired by the killings of unarmed Black people by police and the centuries-long strained relationship between Black people and the police. 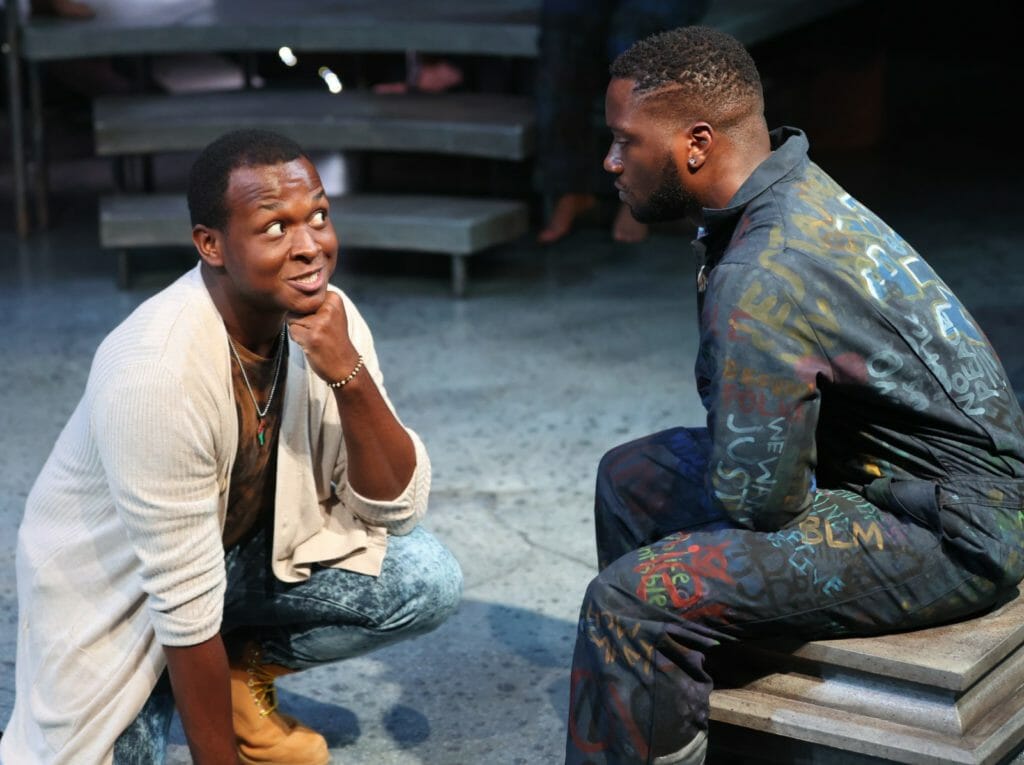 London Carlisle and Marlon Andrew Burnley in “Hands Up.”

The piece originally was commissioned and produced in 2014 for The New Black Fest, a theater festival in New York that marries art and activism with a focus on the African diaspora.

Under the direction of Keith Arthur Bolden and Alexis K. Woodard, the Alliance takes this production from the festival circuit to a full production performed by an ensemble of nine actors. Bolden and Woodward do a fine job of using movement to break up these text-heavy plays. The actors stand on stage barefoot wearing long-sleeve coveralls painted with the words “Black Lives Matter.” As performers step into the spotlight to tell their story, they put on shoes.

Each play is recited by a single narrator, except “Dead of Night . . . The Execution of . . . ” by Nambi E. Kelley, which is also the only piece told from a woman’s point of view. It’s also one of the more gut-wrenching and specific of the stories. The three women in the ensemble, Charence Higgins, Jessenia Ingram and Kala Ross, take a page from Ntozake Shange’s For Colored Girls and take turns telling the story of a Black woman who is violently beaten by her white boyfriend. Of course, the police side with him, and the grim details really demonstrate the complex intersectionality that Black women grapple with every day.

Imaginative set design by Isabel and Moriah Curley-Clay and projections by Milton Cordero bring these stories to life. The fingers of oversized brown hands reach up from the ground on either side of the stage. Platforms are constructed in front of a map of the U.S. that has space between regions and clusters of states. Illustrations are projected onto the map indicating a change of place and tonal shift between plays.

Cordero’s celestial projections are especially beautiful in “Abortion” by NSangou Njikam. In this quirky and sad testament performed by London Carlisle, a man has become resigned that he cannot bear to lose a child to police violence so if his girlfriend ever gets pregnant, they must terminate the baby. Carlisle sweats, using his full body to tell the story, making references to light sabers in Star Wars and hibernating cicadas.

The most engaging piece is “Walking Next to Michael Brown” by Eric Holmes and performed by Sean M. Dale. Dale plays a young man and an old man commenting on Brown’s murder, both thinking they have the solution to the problem — but it’s hard to go up against a gun. Dale is fully committed, thoughtfully pacing his delivery and landing some very funny Charlie Rose impressions. 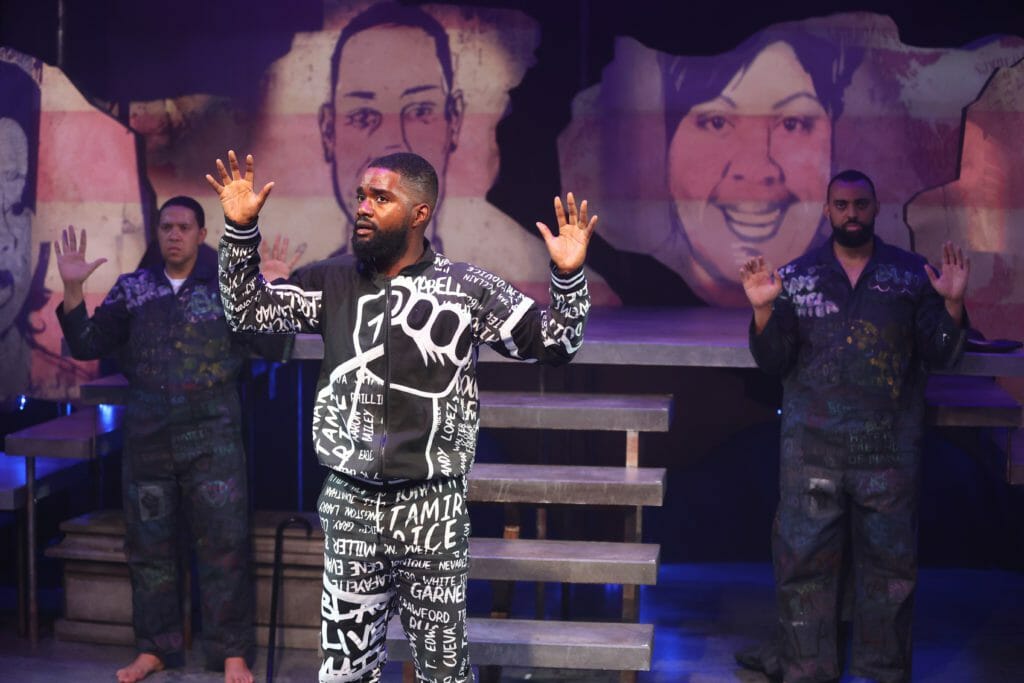 Even with a talented ensemble, Hands Up still feels a bit out of place outside of the festival circuit. It’s protest theater, but it isn’t saying anything about police brutality that we haven’t heard before, especially since the protests following the murders of George Floyd and Breonna Taylor. Each narrator comes off as the everyman of surviving police brutality. Perhaps we have arrived at a place in our society where we can have this archetype as the core issue.

Those who have been following the conversation around policing will know that it has advanced far beyond where it was following the murder of Michael Brown in Ferguson, Missouri. For everyone else, perhaps being asked by the company to hold their hands up through the duration of the final play may cause enough discomfort to shock their hearts.

Hands Up is a sidestep from the Alliance’s typical programming, even in the Hertz. Some Black people may have their experiences affirmed by it. And, with this production running at an hour and 40 minutes with no intermission, no one can escape it, driving home the message that it will always be about race until it isn’t.

Kelundra Smith, an ArtsATL Editor-at-Large, is a critic and arts journalist whose mission is to connect people to cultural experiences and each other. Her work appears in The New York Times, Food & Wine, American Theatre and elsewhere. She is a member of the American Theatre Critics Association.