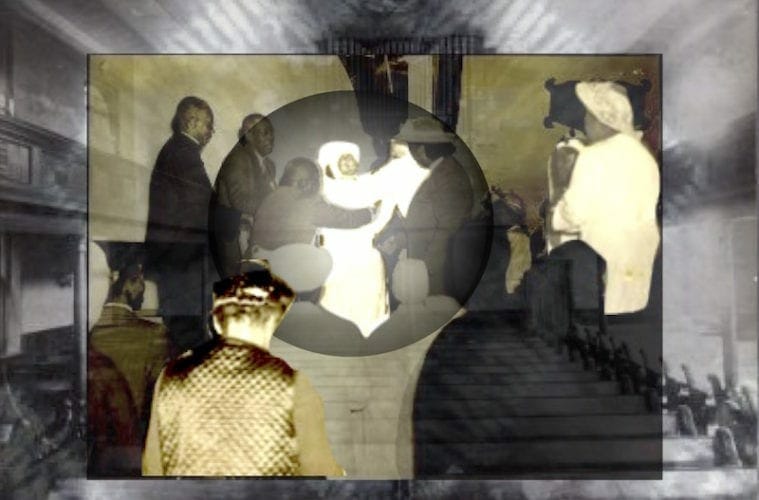 "Baptism" is a digital image by artist Charmaine Minniefield from photos in the Langmuir Collection at Emory University.

For visual artist Charmaine Minniefield, this year’s Juneteeth holiday calls for defending a new freedom of black visual interpretation and meditative expression. Her Remembrance as Resistance: Preserving Black Narratives is a virtual production that launched at 12:01 a.m. today (June 19) on the Flux Projects website. It combines visual art, social activism and the opportunity to engage the community, and can be seen through midnight Sunday. In response to the Covid-19 pandemic and the nation’s current social unrest, the physical installation at Atlanta’s Historic Oakland Cemetery has been moved to Juneteeth 2021. Also for Juneteenth, artists sponsored by Power Haus Creative will turn downtown’s Flatiron Building into an outdoor gallery described as “an exhibition of unapologetic black expression.” The in-progress paintings — 11 a.m.–6 p.m. today — will be viewable until Monday. This effort, called the Juneteenth Takeover, is free — although donations to support black artists are encouraged, as are mask-wearing and proper social distancing.

The Juneteenth holiday celebrates the date in 1865 that the Emancipation Proclamation — which had been issued more than two years earlier — was first read to enslaved African Americans in Texas.

Minniefield frames her virtual work as a wake-up call about black bodies, preserving black narratives and pushing back against erasure in response to the recent discovery of 800-plus unmarked graves on the African American Grounds at Oakland Cemetery. The community has been affected by gentrification and social iconography, among other things, she says, so her work is meant to prove that black people are here, that the “embodied memory” of ancestors is present and shall not be (re)moved completely from this sacred space.

Here’s a preview of what you’ll see on Minnefield’s video loop and much of her upcoming work:

Let Us Come Together is a virtual performance of the Ring Shout, “a full-body meditative, physical prayer as healing for our people, our bodies, our families and our people,” says Minniefield. Nine women around the country (and world, since Minniefield is in Gambia), respond to a simple Ring Shout beat choreographed by Julie B. Johnson. The piece was produced by videographer and documentary filmmaker Kimberly Binns.

We Shall Not Be Moved has three components — architectural renderings of the Praise House replica that will be installed in Oakland Cemetery for Juneteeth 2021; a digital installation of the inside of the Praise House; and a preview of a series Minniefield is working on with the Stuart A. Rose Library at Emory University, where she’s an artist in residence. She’s reworking images from the Robert Langmuir African American Photograph Collection as a creation story in which women come together as part of a Ring Shout to create humankind. SHOUT: A Global Women’s Cypher, an hourlong live event with artist and hip-hop ambassador Toni Blackman, happens at 2 p.m. today. It’s free to see, but you must register. It’s a contemporary iteration of the Ring Shout that includes dance, music and spoken word. A DJ will accompany women from the American South, Los Angeles, New York, Australia and Kenya as they flow from verse to verse. Registered viewers will be able to participate via chat.

Minniefield sees this project as a time to pause and have collective intentions toward freedom and ancestral prayer in response to and demand for today. She recalls George Floyd’s May 25 death — so near the May 31–June 1 anniversary of the 1921 Tulsa Race Massacre. As Floyd called out for his ancestral mother, the artist says, she came with an army.

“Our black ancestors are here coming forward from layers of that history to defend black bodies and their babies,” Minniefield says, “to defend our humanity and demand freedom now. We are standing as artists, but we’re notably standing with our ancestors. We’re acknowledging their presence in this moment . . . a pivotal moment inside of a movement. They’re ready. We’re ready.”