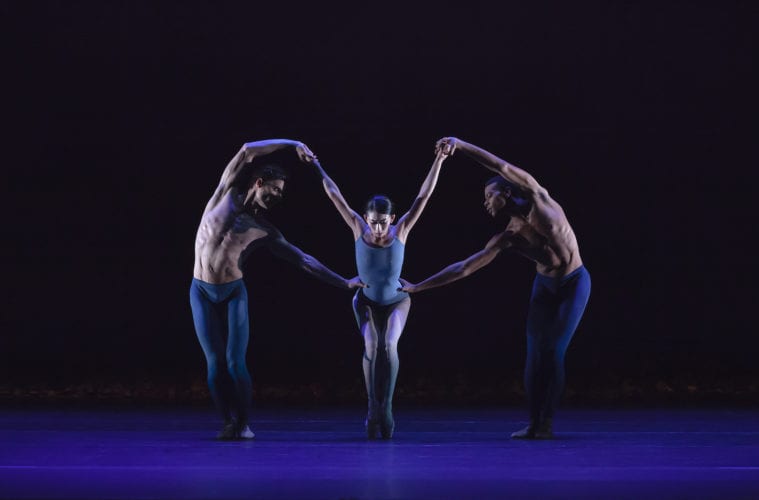 The production will reprise most of September’s program — Jiří Kylián’s Return to a Strange Land, George Balanchine’s Tschaikovsky Pas de Deux, Marius Petipa’s Grand Pas de Deux from Don Quixote and Ricardo Amarante’s The Premiere. And then, this weekend’s program features the second movement from Craig Davidson’s Remembrance/Hereafter, a 2018 Atlanta Ballet commission scheduled to tour to the Czech Republic next February.

Placed alongside Return to a Strange Land, Davidson’s piece offers insight into questions about life and death. Each ballet was deeply personal to its creator, and each remains breathtakingly beautiful to witness. Though distinct in style and viewpoint, both works deal with the idea of death as transition from one realm, or state of being, to another.

Davidson created Remembrance by drawing, in part, from the childhood experience of his father’s death. Not one to dwell on trauma, Davidson said he chose instead to express the emotions he felt as a child and the ideas that helped him come to terms with the loss — and to explore the “beauty of that final surrender.”

Though it is one of his earliest major works, Remembrance is as likely to live on in Davidson’s repertoire as Return to a Strange Land has remained in Kylián’s.

Kylián was young in 1974 when he created Return to a Strange Land as a tribute to his mentor, John Cranko, who had died of a heart attack while on an airplane flight from the United States to Europe. Similar to Davidson’s piece, Kylián’s seminal ballet deals with ideas about death and rebirth, as a program note said, of “passing and reappearance.”

As long as dancers can meet the demands of both choreographers’ styles, then seeing these ballets on the same program will offer new frameworks for thinking about life’s final passage as an experience encompassing both the inevitable and the transcendent.