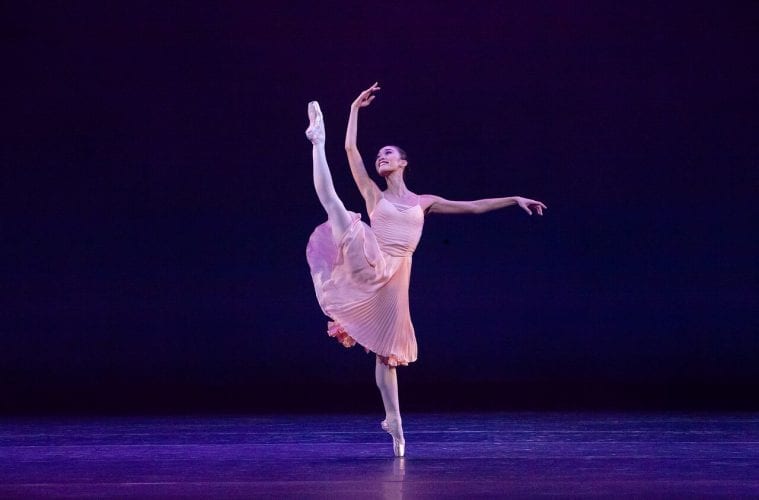 Review: Atlanta Ballet’s “Return to Fall” offers a mixed bag of the old and the new

Last weekend, Atlanta Ballet’s Return to Fall, the company’s first main stage fall production in seven years, offered a bit of the familiar, historic and historically contemporary — with a seminal contemporary ballet, a Balanchine pas de deux, a performance by two formidable guest artists from Czech Republic and a new commission that elicited brilliance from the mostly young corps of dancers.

The Atlanta Ballet under Gennadi Nedvigin brings a sharper eye to the art form’s history. At times, the mixed bill of classical, neoclassical and contemporary works, which ran last weekend at the Cobb Energy Performing Arts Centre, revealed new meanings in the language of ballet — showing not only the art form’s development over time, but also how similar motifs seemingly speak to one another across decades or centuries.

At other times, casting choices for Friday’s performance seemed unaware of the company’s recent history and what its more experienced dancers could have brought to bear on the program’s contemporary work.

Take, for example, the program’s opener, Return to a Strange Land. Jiří Kylián, one of the most influential choreographers of his generation, created the work in the mid-1970s as a tribute to John Cranko, former artistic director of Stuttgart Ballet, who nurtured Kylián’s artistic growth until Cranko’s untimely passing.

Themes of death and rebirth, of “passing and reappearance,” a program note read, filled the work as Kylián developed a vocabulary with new dimensions of expressiveness — a body language that reveals inner emotion, not through literal characters, but through movement qualities and body shapes — at times emotionally expressive, at others, cryptic or symbolic. Dancers versed in Kylián’s style embrace space as if it were a partner. Like waves, they rush across the stage with fluid momentum. Keith Reeves and Darian Kane in The Premiere

Part of what makes Kylián’s style so compelling is its contrast to traditional ballet, and Atlanta Ballet dancers could have used a bit more practice to fully draw out the work’s power. There seemed to be nervousness on stage as Jordan Leeper and Anderson Souza swung Airi Igarashi upward in an elliptical orbit, her legs together in parallel, shaped at an open angle, then descended into the floor. The motif was clear, and clear in its reappearance elsewhere — wrapping around her partners as they carried her through figure-eight patterns, in arm gestures and counterbalanced group forms.

But it takes time to finesse the style — and life experiences to draw from in order to fully embody the work’s sophisticated expression. On Friday, these beautifully trained young dancers seemed to be still working out body shapes and transitions that seemed unfamiliar to them. They seemed self-conscious, as if they hadn’t fully taken ownership of the choreography — a skill that is as important as acquiring technique and is developed through thoughtful coaching and life experience.

Balanchine’s style demands a special sense of musicality, and both dancers showed this, especially in the adagio, when Tarakanov partnered He in a series of slow turns at center stage. Dressed in peach chiffon, with a matching flower in her hair, He turned under his arms, then pivoted back in the other direction, changing hands.

She opened into an arabesque. As the music reached its final cadence, Tarakanov held her around the waist and lowered her into a classic fish dive, slowed from its usual explosive speed to a gracious bow, done with delicacy and control, charmingly accented at the end with He’s pert upturn of the head.

The pas de deux was a charming fit for this musical couple, especially given Tarakanov’s buoyant technique and He’s open and lively expressiveness.

With hands conjoined, Ogimoto pivoted one way, reached out with a leg, turning back on herself, then whirled again the other way, reaching away with her leg. Shown in a different context, and taken to physical extremes, this series of supported turns took on very different meaning.

As with Kylián’s work, the language of Vertigo combined ballet and modern dance influences — but the use of tension was more telling. Side by side, the pair slowly advanced from darkness into the dim light, arms circling their bodies, hands as nondescript as a blank stare. They folded their arms into tight angles, bodies bending. At one point, Ogimoto dropped suddenly, but Stípa caught her at the elbow while she stretched her hips away from him, looking away. The only thing holding her from falling to the floor, and separating her from him, was his grip on her arm, her elbow held firmly at a right angle. The counterbalance suggested a complex relationship in a work that showed how the classical language can be stretched, yanked out of shape and turned inside out — to say something very different.

Intended or not, Ogimoto and Stípa showed the younger dancers of Atlanta Ballet how European contemporary work should be done — the layering of physical form with emotional texture and the complexity of it all in Bigonzetti’s darkly tense yet beautiful vision.

Nikolas Gaifullin and Jessica Assef displayed their growing technical prowess in the Grand Pas de Deux from Don Quixote, and the third-act world premiere of Ricardo Amarante’s The Premiere capped the evening beautifully and drew out the company’s strengths, allowing them to shine. A large cast — including several new company members — projected confidence, humor and enthusiasm in a work inspired by dancers’ day-to-day experiences in class, rehearsal and on stage as they prepare for an opening night.

On a set that recalled the Roman Colosseum, to Camille Saint-Saens’ driving Danse Macabre, Amarante wisely built on dancers’ youthfulness and momentum. He deftly moved large groupings across the stage to captivating effect as dancers endlessly whirled, dipped and whipped out emotionally charged extensions. Amarante seemed to have given dancers permission to tap their own life experiences, as professional ballet dancers, to create authentic feelings on stage.

In featured appearances, Jackie Nash’s humor came to the fore. Nadia Mara’s musicality was spot on. Such brightness on stage recalled years past when these two dancers pushed their physical limits, time and again, dancing the styles of Alexander Ekman, Jorma Elo and Douglas Lee — all with ties to Kylián. It’s hard to understand why, with the exception of a few featured soloist appearances, these two veteran dancers have all but vanished from prominent roles with the company.

Considering their breadth of experience, one can only imagine what nuance, sophistication and emotional depth Nash and Mara might have brought to Return to a Strange Land. For a company so focused now on history, one wonders if anyone is heeding the company’s recent past. Are Atlanta Ballet’s greatest assets being overlooked? Strange, indeed.