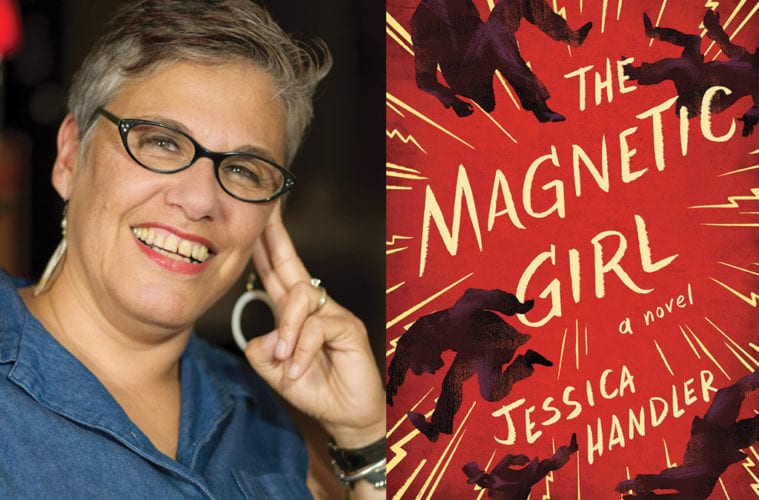 Jessica Handler's debut novel, The Magnetic Girl, is loosely based on the story of a real girl from 1880s Cedartown, Georgia, gifted with supernatural abilities. (Photo courtesy of Hub City Press)

Mesmerism is both the medium and the message in The Magnetic Girl, Jessica Handler’s unconventional debut novel, which proves as compelling as its young heroine.

Loosely based on a real-life events, The Magnetic Girl tells the story of Lulu Hurst, an endearing girl from Cedartown, Georgia, gifted with preternatural powers of precognition in the 1880s.

One day, Lulu uses eye contact to “captivate” a marauding fox threatening her disabled brother. She soon realizes that this power can be wielded on people, too — adults and other children go stock still when she holds them in her gaze.

Later, in her strict father’s library, Lulu discovers The Truth of Mesmeric Influence. This book becomes her lodestar throughout the novel, and Handler’s made-up, italicized excerpts from the user’s manual are lovingly, and delicately, realized.

Throughout her story, Lulu aspires to use her gift to alleviate the suffering of others, especially her brother, but Lulu’s cunning father has other ideas for his daughter. Struggling on a dirt farm, he discovers her abilities and quickly puts them to work on the vaudeville circuit, where she is billed as “The Magnetic Girl,” performing parlor tricks on “marks” in her audiences — for example, levitating a large man.

The carny aspects of this world — from blackface to bawdy comics — show that Handler clearly enjoyed her historical research. She asks us to imagine what would happen if a too-tall, socially awkward, 14-year-old country girl suddenly developed magical powers and began to tour the country, performing in big cities to ever-growing crowds. Is she an empath, a psychic or a charlatan? Is she just a spooky kid? Handler toys with these questions to mysterious effect but never allows us to lose sympathy for her main character. We root for Lulu every time she mounts a stage, grimy with grease paint.

“I’ve always loved stories about women who defy cultural expectations,” says Handler. “I fell in love with Lulu and used what facts I could find and then imagined the rest. I mean, in every class, there is a kid who always wins a staring contest, so I envisioned that figure.”

Handler, who lives in Atlanta and will be debuting The Magnetic Girl at A Capella Books’ Writers at the Wrecking Bar on April 9, has already demonstrated that she possesses a bone-deep understanding of the complex, interior lives of girls and women. Her Braving the Fire: A Guide to Writing About Grief proves therapeutic for anyone who has experienced a loss, and Invisible Sisters: A Memoir was named one of the “Twenty-Five Books All Georgians Should Read.”

Despite her precocity, Lulu still has her adolescent angst. She shyly dreams of a “paramour,” and she has a self-mutilating tic — she derives satisfaction from pricking herself with a pin. These are just other examples of the fully formed details Handler uses to bring Lulu to vivid life.

Toward the end of the tale, as Lulu starts to burn out, her father tries to shift her milieu to the safer, and more rigged, world of spiritualism — from her “cold readings” with no advance preparation to “hot readings” in which she has insider information to work with, such as “the man in the second row just lost his mother whose name starts with ‘M.’”

Though the real Lulu Hurst retired at age 16, Handler’s fictional version presents Lulu with a pivotal decision at the end of the novel. Does she defy her scheming father or summon The Truth of Mesmeric Influence? Given the warmth and sincerity with which she’s drawn, the crowd will be captivated either way.