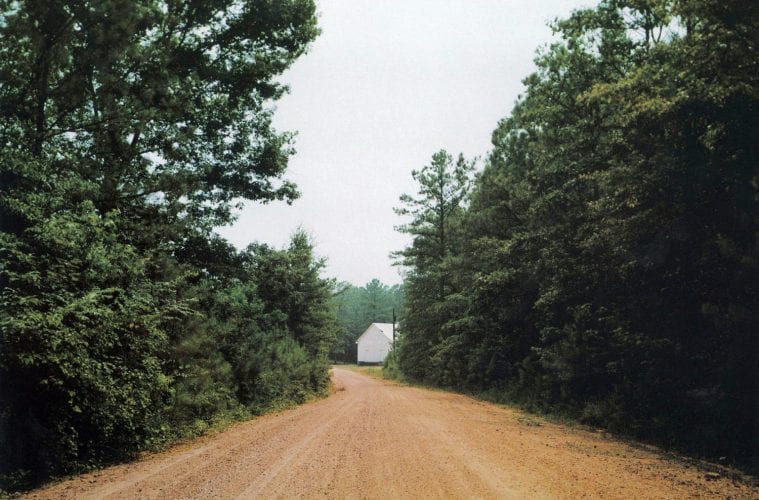 At the High and in Hale County, photographer William Christenberry’s testaments to time and memory still stand

“The place makes you who you are, creates who you are,” photographer William Christenberry remarked in 1994.

For four decades, beginning in the early 1960s, Christenberry returned to the place that had made him. A poet with a camera, he famously captured what he called the “Southern landscape of beauty and wonderment, the side of it that is haunted with memory and sadness.” He cared deeply about his primary subjects — time, memory and place — and he dedicated his life’s work to exploring their hold on his imagination.

A new exhibition of more than 100 photographs drawn from the High Museum’s permanent collection, William Christenberry: Time and Texture, reveals just how profoundly the artist was marked by the buildings and landscapes of his native Hale County, Alabama, an area known as the Black Belt for its once rich, dark soil. Christenberry’s family had lived for almost a century in the farming communities of Hale County, where his mother and father first met in the ninth grade. They married in 1935 and moved to Tuscaloosa, where his father worked in a bakery and where Christenberry was born in 1936.

Christenberry grew up knowing he wanted to be an artist. In 1954, he entered the University of Alabama, where he trained as a painter and sculptor in the age of abstract expressionism. His first paintings bore the gestural energy of abstraction, but they ultimately left him unsatisfied and searching for a way to move beyond such nonobjective concerns to pursue his true interest: a landscape-oriented approach to image-making.

He found his answer in a book. In 1960, a 23-year-old Christenberry happened upon a copy of the newly issued second edition of Let Us Now Praise Famous Men in a Birmingham bookshop. The profoundly beautiful, exasperatingly difficult, unclassifiable American classic was first published in 1941. Nominally about cotton tenant farming in the Depression-era South, Famous Men, with words by James Agee and photographs by Walker Evans, is a book about seeing deeply into things as they are, a universal record of a singular place and time, more artifact than book.

Evans’ photographs captivated Christenberry. In creating their work, Agee and Evans had traveled to Hale County, Alabama, in the summer of 1936, just a few months before Christenberry himself was born. Pictured on the book’s opening pages were the people and places of Christenberry’s youth, the farms and landscapes of his childhood and even his grandmother’s neighbors. “It was fascinating to me,” he said in 1996 on the occasion of an exhibition of his work at the Morris Museum of Art in Augusta. “What they had done meshed so completely with my feelings about that landscape and those people.”

Christenberry retraced Agee’s and Evans’ footsteps through Alabama, photographing again what subjects of theirs he could find. The book became the inspiration for a series of paintings he called Tenant House, inspired by the Tingle house in Akron, Alabama, which Evans had photographed. But as inspiring as Evans’ images were, Christenberry says he was even more deeply moved by the writing itself. “I had never run into a writer who described so clearly, so beautifully, the things I had experienced as a child,” he said in 1996. “The smell of that landscape. Of course, the appearance of it. And, just the minute detail.”

In Agee’s preamble to Famous Men, Christenberry found the seeds for the work that was to consume him for the rest of his life, a collage-like aesthetic of word, image and artifact: “If I could do it,” wrote Agee, “I’d do no writing here. It would be photographs . . . cloth, bits of cotton, lumps of earth, records of speech, pieces of wood and iron . . . . A piece of the body torn out by the roots might be more to the point.”

Christenberry left Alabama to pursue his life as an artist — first in Memphis, then New York and Washington, DC — but he always returned to Hale County, revisiting the sources of his inspiration to photograph the same buildings over time: a green warehouse, a country store, a juke joint, often arranging the images in a grid that served as a counterpoint to the randomness of their transformation and dissolution.

Christenberry never abandoned painting or sculpture, but photography eventually became his primary medium. When Christenberry moved to New York in the early 1960s, he called on Evans at his Fortune magazine office. They found a connection that lasted a lifetime. It was Evans who first convinced a young Christenberry that the photographs he was taking in Alabama with his childhood Kodak Brownie camera in preparation for paintings and sculptures were his real art. And in 1973, it was Christenberry who convinced a reluctant Evans to come join him on a trip back to Hale County, Evans’ first return to the place where he’d spent a seminal summer almost 40 years earlier. The palimpsest of time layers Christenberry’s work. The painted sign on a worn brick wall, just like the grave of mounded red dirt with homemade decoration and plastic flowers, has yielded to time. The white-painted iron bed marking a grave in a sunny field of overgrown grass, photographed in 1965 and shown again 17 years later, has succumbed to time and neglect, almost hidden beneath the shade and vines of an overgrown wood. Who remembered it then as it had been before? Christenberry made sure that he did.

Christenberry’s photographs are memory incarnate. Although there is not a single human present in his pictures, there is human presence in almost all of them; there’s an attendant allusion to the cycles of life and death, of creation and dissolution. His land is both itself and everything that has happened on it. William Christenberry, Grave with Bed as Marker, Near Faunsdale, Alabama, 1982

Like Christenberry, I have returned to Hale County many times.

Famous Men is a book that I, too, know well. I have worried it like a toothache ever since I discovered it three decades ago. I first came to Famous Men, as many have, through the Walker Evans photographs. But it is Agee I fell in love with. It is Agee who, in his relentless search for beauty and meaning, commands us to see, as he himself saw, the beauty in the individual human and the uniqueness of a particular place, what he called “the cruel radiance at the heart of things.” The book shimmers with the profound presence of summer night, of heat and humidity, of human toil and exhaustion, of slow time and, above all, of Agee’s deep experience of the beauty of it all. Eventually, I, too, like Christenberry, set out to understand my near-obsession with the writer and his subject. I was drawn to Hale County to see for myself.

I first visited in 2012. It’s a place where the old lingers side by side with whatever else has come along — and not much has. Time seems to be the main catalyst, working its inexorable entropy on the landscapes smothered in dark green kudzu or scarred by erosion and neglect. Many of the weathered buildings all but kneel in the hard dirt. Driftwood barns with sails of rusted tin list in seas of dark green soybeans. The cotton fields are forgotten. Catfish is king now. Enormous ponds dug right into the old fields mirror the empty sky. An atmosphere of deep, sad beauty still hangs over Hale County. The place has marked me.

William Faulkner believed in the fluidity of time — There is no such thing as was, only is — and that Faulknerian sense of the past within the present is here as in few other places I have encountered. It graces the tops of the pines and rakes across the fields possessed of something that has been there all along but gone unnoticed until a certain slant reveals its presence like dust motes in a shaft of sunlight. A sense of patient time presides over it all, as if what once animated the place is still present. Just as Christenberry said, it is a place haunted with beauty and memory and sadness. My visits to the Hale County Courthouse and my drives along the same roads Agee and Evans traveled while I researched their story — Moundville, Sprott, Akron, my search for Mills Hill, that “lift of red clay” where Agee lived with the Burroughs family one distant summer in a home now disappeared — carried for me the weight, urgency and respect that Christenberry must have felt.

In Christenberry’s photographs, the simple country churches and red clay graveyards, the kudzu-covered landscapes of his family home and the weathered pinewood buildings in silvered moiré patterns bear the weight of time with dignity. It’s clear that they have lasted long, but it’s equally clear that they will not last forever.

In the 2008 book Working From Memory, Christenberry speculated about what might become of the green warehouse he’d often photographed on his visits to Hale County. He recounted that its owner, a Mr. Walthall, “had passed on now, and it remains to be seen what’s going to happen to that building that I’ve deemed so beautiful, but for the moment it’s still there. I was told that he had given instructions that he wanted the building to remain just the way it was, for me, even after he passed away.”

Visiting that green warehouse today is an act of pilgrimage. Still standing, it is an object imbued with all the dignity and reverence with which Christenberry sought to portray it.

In April of 2012, I had the chance to thank Christenberry for his work. Just days after my first visit to Hale County, a show of his photographs opened at Jackson Fine Art Gallery in Atlanta. There he was — tall, lean, a little frail, aged, gracefully bearing the attention and the crowd. I waited for a quiet moment to approach him and thank him for his work, for remembering. I told him that I had just been to visit the green warehouse and that it was still the same proud, beautiful color he’d photographed, holding its own just fine. His gaze sharpened. For a moment, as lovely as it was brief, he looked at me as if we both understood, deeply, some wordless thing. When someone else approached and asked for his attention, he glanced at her, and then, almost longingly, back at me: the moment was already another memory. The warehouse is still there. When I visited most recently this April, the old building was the same John Deere green that the former owner, Mr. Walthall, had promised he would always maintain just for the photographer. Though it was a little worn, with silver showing through the familiar green, the building’s metal siding, the steep tin roof rising sharply to a point, and the three blank wooden doors were all the same as when Christenberry had first photographed them 40 years earlier.

I pressed my palm against the warm metal siding, remembering how Christenberry once said he felt like “he could reach out and touch memory.” I think he would have appreciated the fact that the proud old building had outlasted him. It is now a testament to him, just as he’d sought, through his art, to be for it.