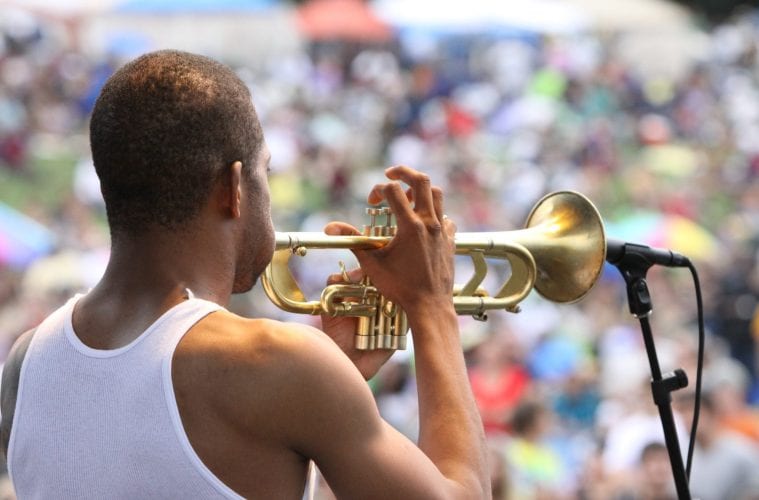 If we’re lucky with the weather, Piedmont Park will be infused with the rhythms of jazz, funk, bossanova, R&B, the blues and Afro-Cuban music as one of the largest free jazz festivals in the country. The 41st annual Atlanta Jazz Festival swings into high gear this weekend.

For the first time in the festival’s 41 years, Saturday’s entire repertoire will be devoted to female artists including Jazzmeia Horn,  Anat Cohen Quartet, the Yoko Miwa Trio and Dianne Reeves. Rounding out the program will be Sunday’s lineup including Matthew Whitaker, Sidewalk Chalk and The Lao Tizer Quartet featuring Eric Marienthal, all representing the next generation, the avant-garde and the legends in their field. Back-to-back Late Night Jazz Jams featuring Russell Gunn & The Royal Krunk Jazz Orkestra will give night owls a place to roost ‘round midnight till daybreak at the Park Tavern adjacent to Piedmont Park.

ARTS ATL has scoured the rundown, and these are our top picks for the Atlanta Jazz Festival:

A San Francisco-native, musician, composer, producer and band leader, Sasha Berliner seeks to speak out about social justice through her music. Her blog post An Open Letter to Ethan Iverson (and the Rest of Jazz Patriarchy) made her one of the most talked-about jazz musicians associated with the #MeToo movement. Berliner started playing drums at eight years old and the vibraphone at 13. She was a member of the SFJAZZ High School All-Stars Orchestra and a guest percussionist in the Oakland Youth Orchestra, and she performed at the New York Winter Jazz Festival and Deutsche Jazz Festival in Frankfurt, Germany, all before her 20th birthday.

Born in Malaysia and raised in Perth, Western Australia, bassist and composer Linda May Han Oh is currently based in New York City where she teaches at the New School and is a member of Pat Metheny’s quartet. Oh, she’s also a graduate of the Manhattan School of Music, won ASCAP’s Young Jazz Composer’s award in 2008 and was named the 2012 Downbeat Critic’s Poll “Rising Star” on bass. The Wall Street Journal acclaimed her album Walk Against Wind as “music that is resolutely of the moment,” adding that “her innovative range and stellar improvisations have made [her] one of the most dynamic rising stars in jazz today.”

Formerly a band member for the Arsenio Hall Show, Terri Lyne Carrington is a three-time Grammy Award-winning drummer, composer and educator. A 40-year veteran of the music industry, her eight albums borrow from jazz, indie rock, contemporary classical, R&B and free improvisation. “I feel it is our job as artists to carry out the responsibility of reporting, commenting and even educating about what is going on in the societies we are a part of – regarding humanity, politics and anything else that effects our freedom or life condition,” she says. “When we choose to be passive, we’re choosing an easier route, but complacency has its consequences.” 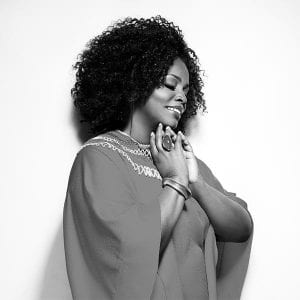 What becomes a legend most? Dianne Reeves performs on the Legends Stage tonight. (Courtesy the artist)

A last-minute addition to the roster, Alexandra Jackson is a new singer and songwriter from Atlanta. The classically trained pianist is also the youngest daughter of the late Mayor Maynard Jackson, Jr., who founded the Atlanta Jazz Festival in 1978. Jackson’s sound reflects a number of influences, including the classic sounds of bossa nova, and she is inspired by artists including Caetano Veloso, Sarah Vaughan, Chaka Khan and Jamiroquai.

Dianne Reeves is a jazz and R&B vocalist whose five Grammy Awards, honorary doctorate from Juilliard and recognition as the 2018 National Endowment of the Arts Jazz Master attest to her groundbreaking artistic, scholastic and cultural contributions. But when it comes down to the nitty-gritty of why she is so adored by fans and critics as a natural wonder, Wynton Marsalis sums up her appeal, saying, “She has one of the most powerful, purposeful, and accurate voices of this or any time.”

If you’ve ever seen author, musician and head of the Georgia State University Jazz Studies program Dr. Gordon Vernick on the bandstand with the GSU Jazz Orchestra, you know that he is the personification of swing. So imagine that Midas touch combined with the exuberance of youth in an ongoing series of comprehensive jazz education programs for elementary and middle school-aged students throughout metro Atlanta. The Georgia Quality Core Curriculum states, “Students must be exposed to and understand their own historical and cultural heritage as well as others.” And listeners must be exposed to the wonders of the Jazz for Kids program to understand that the future of jazz truly is in great hands.

Matthew Whitaker started playing a small Yamaha keyboard at the age of three, taught himself the fundamentals on a Hammond B3 organ at 9 and was named a Yamaha Artist at 15, the youngest jazz pianist ever to receive the designation. The New Jersey-native is currently studying classical piano and drums at The Filomen M. D’Agostino Greenberg Music School of the Lighthouse Guild in New York City, the only community music school for the blind and visually impaired in the US, and is also enrolled in the Manhattan School of Music’s Precollege Jazz Program. The Harlem School of the Arts alum and recipient of the “Outstanding Soloist Award” from Jazz at Lincoln Center’s Charles Mingus High School Competition & Festival has already toured the US, Europe, Africa and Asia, and is best known to TV audiences for his guest appearances on the Today Show, Ellen and Showtime at the Apollo.

The Georgia Horns formed in 2011 to play for the Blind Willie McTell Blues Festival in Thomson, GA, and their blend of youth, experience, talent and infectious soul has kept them in tune ever since. The sextet comprises Marcus Printup, aka “Soulhorn” on trumpet (when he’s not touring with the Jazz at Lincoln Center Orchestra); Stantawn Kendrick on saxophones; Chris Crenshaw on trombone (also a member of the Jazz at Lincoln Center Orchestra with Wynton Marsalis); Kenny Banks, Jr. on piano; Kevin Smith on bass; and Brandon McCrae on drums.

Praised by AllMusic as “one of the finest Hammond B-3 organ players of his generation,” singer-songwriter-bandleader Cory Henry blends blues, soul, R&B, Afrobeat, gospel and jazz to tell stories that are simultaneously futuristic and retro, experimental and classic. He pieced together The Funk Apostles’ lineup out of players he met on the road over the years, and each member of the band is an all-star in their own right. The Brooklyn native and two-time Grammy Award-recipient has toured with Bruce Springsteen and The Roots and is known for his role in Snarky Puppy, the instrumental jazz-pop orchestra. NPR calls Henry “a master [whose] musical charisma is a match for a nearly 400 pound organ,” and a recent documentary titled Gotcha Now features footage of the then four-year-old, who grew up performing and singing in church, tearing it up on the organ. It took him time to get over his fear of singing, but he hasn’t looked back since. “The human voice is so powerful,” says Henry. “When I’m singing, it’s like this extra way of connecting and communicating with people beyond what I can do just playing the organ. I’m able to convey these messages that are really important and meaningful to me through my words. Being front and center like this every night, it’s a challenge, but I’m up for it.”

M.F. Production’s Latin Jazz All-Stars features masters of Afro-Cuban, salsa, Brazilian and Latin Jazz. The “super band” features no leader. Instead, the participants share the spotlight and showcase each other.

9 p.m. Jon Batiste with the Dap-Kings

Jon Batiste is a globally celebrated musician, educator, bandleader and television personality. Whether playing the piano, crooning, wailing on the “harmonaboard” (a kind of harmonica and keyboard), or curating what he calls “social music experiences,” his virtuosity, vision and verve make him a triple threat. Born in Louisiana, Batiste earned undergraduate and masters degrees from the Juilliard School before forming his band, “Stay Human.” Late Show with Stephen Colbert viewers know Batiste as the bandleader, and fans of the HBO series Treme have seen him play himself in cameos. These days, Batiste is based in New York City, where he recently released several independent albums, including MY N.Y., which was recorded entirely on the street corners and subways of New York. The Dap-Kings are the powerhouse band behind the late Sharon Jones, and the band on Amy Winehouse’s Grammy-winning, multi-platinum album Back to Black.

For a complete schedule of the Atlanta Jazz Festival, visit the event’s website.