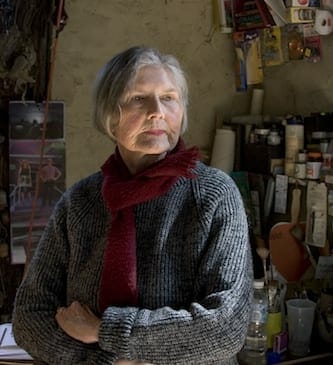 Painter and sculptor extraordinaire Ruth Laxson was known to the Atlanta art world for two reasons beyond her internationally collected artist’s books: for beginning Press 63 Plus in 1987 at age 63 and for her garden, a site-specific work of art in its own right. The garden combined her word-oriented sculptures with an entrancing variety of flowering plants, but she was annoyed when writers played up that side of her creative endeavors.

It’s easy to understand why. From the time she attended the Atlanta College of Art (1958–65) to the moment she had a stroke six months after Hip Young Owl, her 2013 MOCA GA retrospective, Laxson was fiercely devoted to a witty but rigorously exploratory body of conceptually challenging artwork. It ranged from performance and mail art to paintings, sculptures and the books produced via handset type on a vintage letterpress. 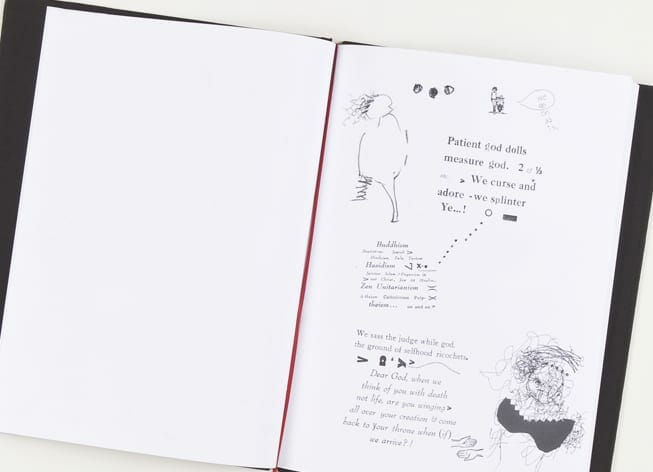 Laxson, who was born in Roanoke, Alabama, moved to Atlanta in 1953. She died June 1 at age 94 in a small private-care home. She had been in declining health for some time and bedridden. Her husband, Bob, died in 2013. She is survived by a niece. Funeral and memorial plans are pending.

Laxson’s work was collected in London by both the Tate Gallery and the Victoria and Albert Museum; the J. Paul Getty Museum in Los Angeles; Yale University Fine Art and Architecture Gallery in New Haven, Connecticut; the Museum of Modern Art in New York; Harvard University in Cambridge, Massachusetts; the University of Alberta in Edmonton, Canada; and the Sackner Archive of Visual and Concrete Poetry in Miami; as well as the High Museum of Art, the LUBO Foundation Collection and MOCA GA in Atlanta.

Laxson was unafraid of tackling big issues, a case in point being her 2008 book, Ideas of God: A Ceaseless Wandering Pa-limp-sest B*ok: An Opuscule of Tiny Mirrors Seeking a Single Grand Image. As the title indicates, Laxson explored these ideas — and the nature of the language in which they were expressed — in playful arrangements of type and innovative word order that made the most abstruse notions not just palatable but pleasurable. 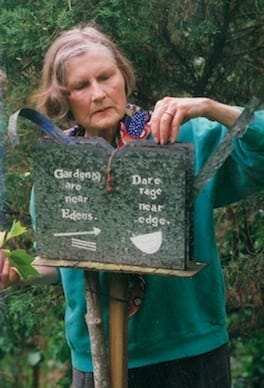 Ruth Laxson in her garden (Courtesy of MOCA GA)

Her love of expressing those ideas in two-letter words whenever possible is reflected in the title she offered for her 2008 artist’s book exhibition at the Rhode Island School of Design, which holds her archives — It Is Up to Us if We Go on as It Is, So Be (Ye) Up. The unexpected aspects of her books, from unusual page sizes and pop-up elements to hand-sewn inserts explain why most of the extremely limited editions sold out upon publication.

In its combination of often-amusing drawings and meandering text, her work was of a piece, whether expressed in ephemeral mail art, books, sculptures or large-scale drawings and paintings such as those in the Hip Young Owl retrospective, which featured more than 125 remarkably diverse works.

It’s worth noting that Laxson turned to artist’s books in 1983 after a distinguished career as a printmaker. The book accompanying Earth Score at Atlanta Art Workers’ Coalition Gallery led her to consider making artist’s books later in life. The exhibition itself included large animal bones on loan from a natural history collection, indicative of the range of work in which she engaged before beginning the press that brought her international recognition.

Ruth Laxson was and is represented by Marcia Wood Gallery, which still holds a modest inventory of her work. A substantial collection of her artist’s books can be consulted in the holdings of the SCAD library in Atlanta, which SCAD inherited in its merger with the Atlanta College of Art.

ARTS ATL contributor Jerry Cullum and Laxson became friends decades ago. He did the interview that became a central part of the Marcia Wood Gallery catalog of Laxson’s 2008 show, Life Is a Page, and took part in a poetry reading and performance with her.