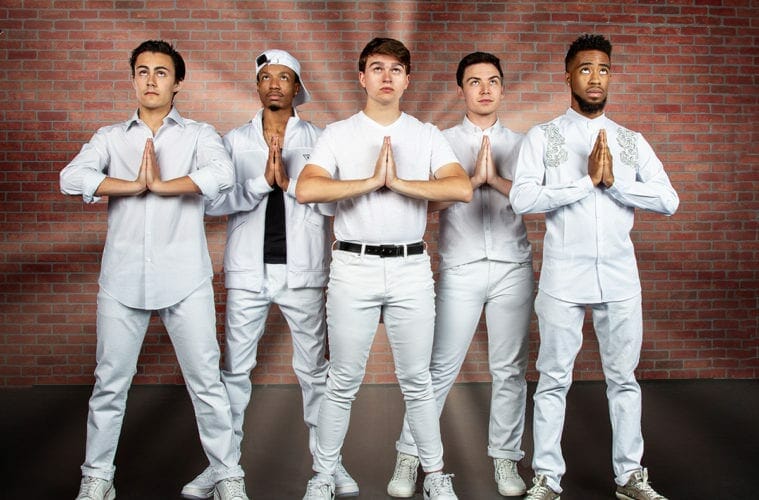 Marietta Theatre Company founder Jeff Cooper sets out to stretch his audiences and provide a range of experiences within the musical genre. “The beauty of musical theater,” he explains, “is you see lots of ranges of emotions, and that’s what we hope to bring.” Marietta Theatre Company’s second season has included musicals such as Nunsense and The Toxic Avenger, indeed running that wide gamut. In directing Altar Boyz, onstage June 7–22, Cooper hopes to bring his season, and his audience, together.

Audiences of Altar Boyz find themselves at a concert for the titular group, a Christian boy band led by front man Matthew (Sully Brown) and consisting of cheerful, barely closeted Mark (Nicholas Anthony); streetwise Luke (David Wells); the charismatic Juan (Landon Ebuna); and Abraham, the lone Jewish member (Jared D. Howard). Throughout the concert, the Boyz share about their lives, support each other through difficult times and tragic events, show off their talents and endeavor to save the souls of the audience with the help of the Soul Sensor XD-12 (it’s a Sony!). However, over the course of the night, it becomes clear that the souls the Boyz end up saving might just be their own.

While boy bands are as much a fixture on top 40 stations now as they were in the years leading up to the musical’s debut in 2004, this new production is taking place in a post-One Direction world. While the boy bands of the ’90s and mid-2000s were presented as a unit within which members filled out specific roles (“the cute one,” “the rebellious one,” etc.), members of contemporary groups like One Direction and 5 Seconds of Summer have the luxury of presenting a more rounded representation of themselves to their fans. They also have the benefit of social media — fans can follow individual members and get a good read on their specific interests, traits, careers outside of the group and so on.

Marietta Theatre’s Altar Boyz has worked to keep up with the climate of the genre. Lines referencing technology have been updated for modern times (the line “Jesus paged me on my beeper” becomes “Jesus @’ed me on Twitter,” etc.). In addition, the contemporary cast doesn’t stick quite as rigidly to their role-assigned stereotypes as previous iterations may have; they still have their fundamental roles, but a combination of updating and inter-band member brotherhood has broken them out of stereotypes.

For all the earnestness of the show’s characters, it would be dishonest to claim that Altar Boyz isn’t a satire. While the show doesn’t poke fun at faith itself, it’s hardly shy about the way that faith is commoditized. Hardly a song goes by that doesn’t reflect some aspect of contemporary faith, positive or otherwise, and typical boy-band factors are constantly warped through that lens (the band’s big love song includes the lyrics “girl, you make me wanna wait” in the hook).

“The whole show pokes fun at how we Americans see faith and how it can be overbearing at times,” says Sully Brown, who plays band member Matthew.

But even stronger than the theme of faith as a commodity — and the thing that drew the Marietta Theatre Company to this show in the first place — is the sense of brotherhood and togetherness within the show. The Boyz’ personalities and world views make their way into their every action onstage, right down to their personal variation on the group’s choreography. But for all their differences, the Altar Boyz have come together with a common goal — and then stayed together for each other.

That community, Cooper and his cast believe, is what helps the show garner cross-faith and cross-cultural appeal. Lighting designer Brad Rudy, who is a self-proclaimed “card-carrying atheist,” says this is the message that drew him to the show the first time he saw it in 2008.

“If we divide ourselves into certain religious or nonreligious or separate religious groups, we don’t do as well as if we’re all together as one,” says Rudy.

When that message has catchy songs, sharp choreography and perfect hair, so much the better.