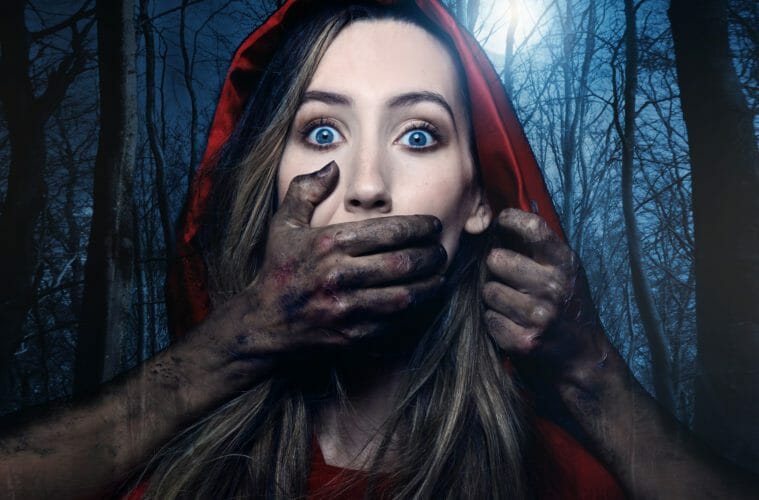 "Salem Experience," being presented by Brian Clowdus Experiences in Senoia, uses the advertising tagline: “You All Wanted a Witch Hunt ..You Got One.” It's an allusion to controversy that has followed Clowdus since his 2019 departue from Serenbe Playhouse. (Photo by BreeAnne Clowdus)

Will it be a “witch hunt” or shrug as Brian Clowdus returns with “Salem Experience”?

At one time the idea of a new Brian Clowdus production opening in the area, following the controversy that surrounded his leadership after he departed Serenbe Playhouse, seemed like it would elevate apprehension and generate automatic protests from the Atlanta theater community. As Clowdus returns to open a new show this week, though, no one knows exactly what to expect — either from the production or the local reaction.

Originally scheduled to debut Oct. 7 in Newnan, the Brian Clowdus Experiences version of Salem Experience opened Thursday night in Senoia, roughly 30 minutes southeast of its original locale, and runs through Halloween night. The production is shrouded in mystery. Its tagline — “You All Wanted a Witch Hunt . . . You Got One” — seems a direct response to the theater artists who have spoken out the last year and a half about their experiences at the now-defunct Serenbe Playhouse. 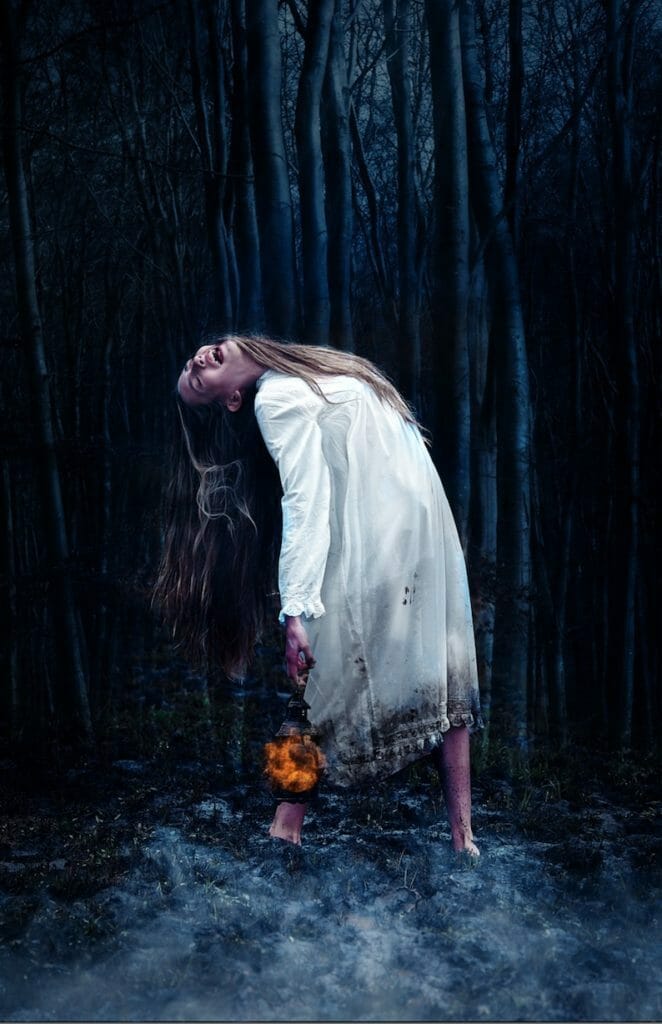 “Salem Experience” is being performed outside a private home in the Senoia area. (Photo by BreeAnne Clowdus)

Salem Experience stars frequent collaborator Julie Trammel, who has worked with Clowdus on multiple productions, and is billed as a family-friendly immersive experience, with a run time of 60 minutes. One character is named Tituba, so the production appears to incorporate elements of Arthur Miller’s 1953 The Crucible, about the Salem witch trials.

On the Brian Clowdus Experiences’ website, patrons are advised that they will find out the location of the production 24 hours ahead of time. The site, though, confirmed by the box office, is 1739 Elders Mill Road, a private home.

Senoia Mayor Dub Pearman acknowledged the event is happening but added that it is outside the city limits. He refused further comment, adding that all he has heard about the event is “hearsay.”

In fall 2019, when Clowdus departed Serenbe Playhouse — the theater company he founded and served as artistic director at for a decade — many wondered what his next career step would be. Few if any could have predicted the aftermath. Theater artists including Tara Moses, Lilliangina Quiñones and Galen Crawley began speaking out against Clowdus in the wake of their experiences at the theater company. Most of the early comments centered on racial insensitivity but other allegations focused on work conditions and abuse.

Clowdus, who has had little specific to say on those matters, refused an interview request for this story. He has moved to Panama City, Florida, and is running for a seat in the Florida House of Representatives. The theater veteran has emerged as a devout Trump follower and posed for a picture with QAnon’s Jake Angeli — known as the shirtless “QAnon Shaman” — at a Trump rally in Dalton, Georgia, just prior to the January 6 attack on the U.S. Capitol. 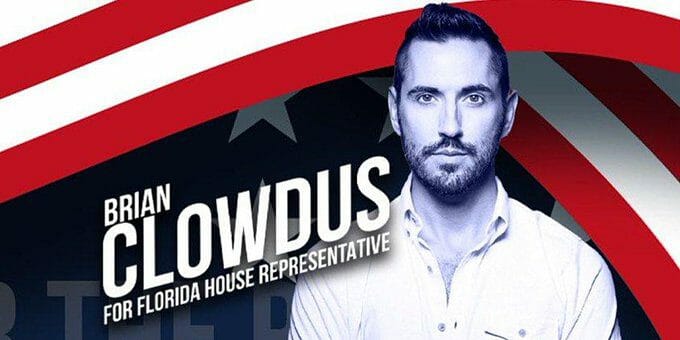 Now living in Panama City, Brian Clowdus is running for a seat in the the Florida House of Representatives.

Clowdus’ campaign ad calls himself a Patriot for the People, showing him shooting a gun and making clear his support for Florida governor Ron DeSantis. Trump ally Roger Stone has endorsed Clowdus for the seat, and the Georgia Log Cabin Republicans hosted him at a Buckhead fundraiser on September 30.

For now, he’s combining political pursuits with entertainment ones. A Brian Clowdus Experiences version of Oklahoma! opened at Mount Rogue Farm in Roseland, Virginia, in August with a cast that included conservative activist James O’Keefe as Curly. Clowdus was scheduled to open the show at Blue Toad Hard Cider — also in Roseland — earlier in August but the production came to an end after Atlanta theater professionals detailed their experiences and concerns about Clowdus on Blue Toad’s Facebook page. 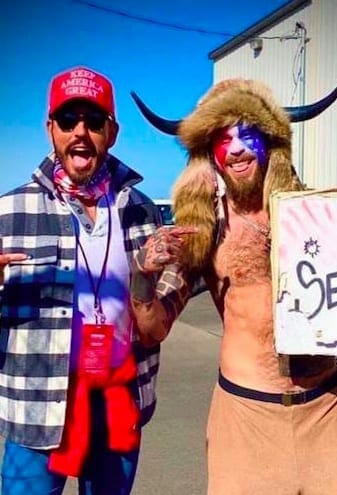 Brian Clowdus poses with Jake Angeli at a Trump rally in Dalton days before the Georgia U.S. Senate election. Angeli became infamous for his involvement in the January 6 attack on the U.S. Capitol.

With all the stories that have come out since last spring, it remains to be seen if theater patrons will support Salem Experience. In spite of emails indicating sold-out performances and box office records, the BCE website lists only one show — Oct 23 at 7:30 pm — as being at capacity for general admission tickets. Thursday’s opening night listed 100 general admission tickets and 34 VIP tickets available out of the 250-seat capacity as of late Thursday afternoon.

Talk of protests came up earlier this year when Clowdus announced he was returning to the area, but neither Quiñones nor Crawley have heard of any definitive plans. Technical designer Spencer Estes worked with Clowdus on several shows including 2018’s Titanic and has been highly critical of him and Serenbe Playhouse and the lack of safety on set. He feels deterrents to a protest are the location and the people with whom the former Serenbe Playhouse leader now associates.

“I feel more hesitant to join in a protest considering the company he keeps nowadays,” Estes says. “I definitely think a protest on private property with far-right extremists around is a dangerous idea.” Regardless of whether any protests do occur, however, Estes is content that he and other theater artists have shared stories already about their experiences.

Paul Conroy, founder and artistic director at Out Front Theatre Company, acted as the general manager of Serenbe Playhouse from 2013 to 2014. He feels impassioned sentiments might have shifted.

“I think people are just ready to let it die on the vine,” he says. “I know that some people are just tired. It’s like, OK, we have to deal with him again and again. That’s how I started to feel about with President Trump. I stopped watching the news. I don’t need to hear him lying anymore. I do think the difference between now and then is that the theater industry is up [and running after more than a year of being shuttered due to the pandemic] now and we’re all working on shows. Before, people had more time and energy and they could focus on him, and now they are focusing on themselves.”