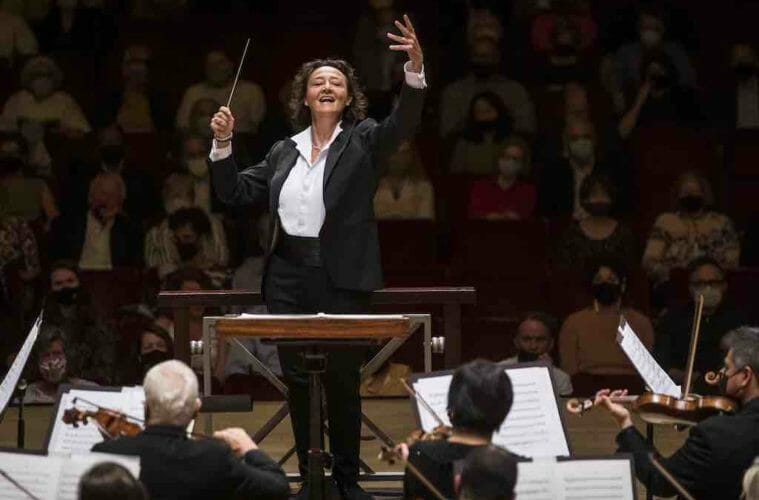 Stutzmann, who will be the only woman leading a major American symphony orchestra, served notice that she will take the ASO to new heights. (Photos by Rafterman)

Last night’s Atlanta Symphony Orchestra concert was already being heavily promoted for featuring guest conductor Nathalie Stutzmann when news broke that she will replace the outgoing Robert Spano as the orchestra’s music director. After Stutzmann’s February performance received a warm response from critics and ASO players alike, there was considerable buzz in the Atlanta classical community that she would be taking the reins.

The move carries with it an admirable degree of cultural impact — Stutzmann will become the ASO’s first female musical director, only the second woman to lead a major American symphony and the only woman currently doing so. These are all notable in their own right but they are footnotes to the larger question: What will the ASO’s new musical director bring to the table? Irrespective of the social impact of the appointment, what lantern will this new leader hold up as a beacon to guide the musicians with whom she shares a stage? Those questions loomed large over the evening’s proceedings.

My reaction to Stutzmann’s February performance was generally positive but largely unremarkable. If anything, she seemed to play it too safe, steering close to the conservative minimalism that Spano himself had long used to define the ASO’s sound. But that was a webcast — one where the camera only turned to Stutzmann sporadically and the sound balance of the mixing console mitigated the ensemble’s true impact. Last night’s concert would be another matter altogether — the audience would see Stutzmann in the flesh, and feel the full breadth of what she brings to the orchestra.

What she brought was nothing short of extraordinary. It was a triumphant and exuberant shot of vitality in the arm of a symphony orchestra long constrained by a sense of genteel, crowd-pleasing politeness. A short film played before the performance that emphasized Stutzmann’s penchant for throwing her whole body — and by extension her soul — into her conducting and it was this primer that hinted at the magnitude of what was to come. Verdi’s overture to La forza del destino commenced with an explosive horn section full of the kind of blood and thunder that had always seemed to elude the ASO. They were bold, magnificent tones imbued as much with tonal clarity as magnificent menace, each one a heart-stopping bellwether for the extraordinary evening that was in store.

The most elegant and articulate words fail to do justice to Stutzmann’s performance. She is a consummate rock star on the podium. With her precise, yet large and wild articulations, she doesn’t “conduct” so much as she seizes the full potential of every note and wrenches it loose from the silence that preceded it. The boon of that fiery summons was evident throughout the orchestra, with each section finding a new depth and life in its sound. Nowhere was this more evident than in the strings.

The silky sweetness of that section was attributed to a combination of Spano’s soft, gentle interpretations and the hall’s own acoustic sculpting. But with Stutzmann, there was a long-dormant grit and sizzle. No longer was the ASO merely an adept and well-received orchestra — this was a furious, passionate and gloriously transcendent sound.

Perhaps the only moment in the evening’s proceedings that could truly distract from Stutzmann was the debut of Dark with Excessive Bright, a new work by contemporary composer Missy Mazzoli. A prolific composer whose work has been performed by the Kronos Quartet, BBC Symphony and Scottish Opera, among many others. Interestingly, Mazzoli’s work was featured in Stutzmann’s February appearance as well. 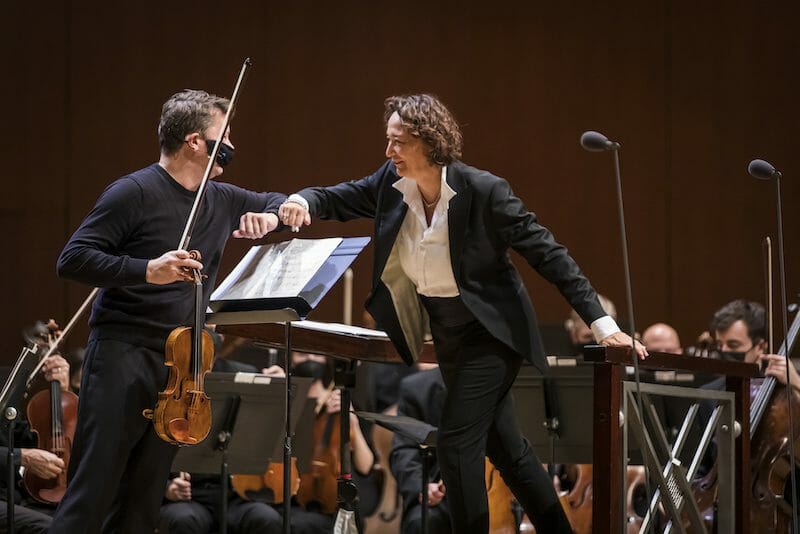 Here, as then, Mazzoli’s work is avant-garde modernism done right: The witheringly tense melody of the violin (here played superbly by guest soloist Peter Harresthal) and pulsating accompaniment are reminiscent of Ennio Morricone’s scores for the films of Sergio Leone. Harresthal’s violin solo was worthy of note in particular with its brash explorations of the outer limits of the instrument’s sonic capacity, eventually finding melodic satisfaction in a forest of arpeggiated scrapes and muted plucks.

The evening closed with Tchaikovsky’s 5th Symphony in E minor, Op. 64. Full of unfocused melancholy indicative of the uncertain mindset with which Tchaikovsky wrote the work — his first symphony in eleven years — the fog of fury and despair in the piece proved to be the perfect canvas upon which Stutzmann would paint her own gorgeous masterpiece of musical gesticulation. It was a performance so riveting in its intensity that the audience abandoned the conventions of classical listenership altogether and applauded between each of the movements.

The Atlanta Symphony Orchestra has done right by its audience, its players and the arts community of Atlanta in hiring Nathalie Stutzmann. If last night’s performance was any indication, she will guide the ASO to new heights, revitalize its sound and recast it from a respectable purveyor of the classics to a formidable force to be reckoned with.

Her warm, comradely hug with concertmaster David Coucheron during the closing applause was felt throughout the room when she turned from the embrace and stood framed in the spotlight, a look of triumphant satisfaction radiating from her face. On the strength of last night’s performance, the classical world would do well to turn its eyes and ears to Atlanta.