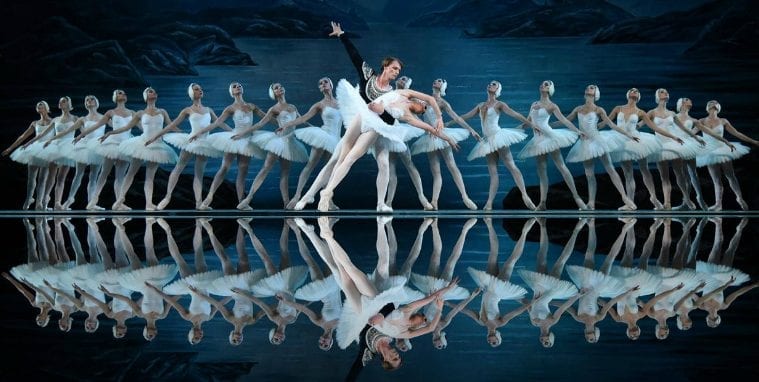 National Ballet Theatre of Odessa: Swan Lake. The four-act production, set to the music of Tchaikovsky and based on Russian folklore and German legend, follows a heroic prince on a mission to free the swan maiden from an evil spell. January 13 at 3 p.m. Fox Theatre. A Doll’s House, Part 2, takes an unexpected twist on the original play by Henrik Ibsen. (Courtesy of Aurora Theatre)

A Doll’s House, Part 2. Based on the classic play by Henrik Ibsen, the coproduction between Aurora Theatre and Actor’s Express takes the story in an unexpected direction. Nora, who left her husband and family to become a successful author, returns 15 years later to her old home to ask her husband for a divorce. Opens January 10. Through February 10. Aurora Theatre.

An Author’s Afternoon at Oakland: Chet Wallace. The author discusses his latest book, Stories of the Winecoff Fire: A Dedication to the Memory of the 119, which gives readers an intimate look into the lives that were lost in the 1946 Winecoff Hotel fire. January 13 at 4 p.m. Historic Oakland Cemetery.

Brad Meltzer: The First Conspiracy. The author will discuss his latest book, which, through heavy research, dives into the secret plot that was created by George Washington’s bodyguards to kill the man they were supposed to be protecting. January 11 at 7 p.m. Atlanta History Center.

Manual Cinema: The End of TV. Told through original 1970s R&B-inspired pop songs and set in a post-industrial Rust Belt city of the 1990s, The End of TV explores deeper meanings in the constant barrage of commercial images. January 12 at 8 p.m. Ferst Center for the Arts at Georgia Tech. Deborah Dancy’s Toxic — several of the artist’s works will be on display through February 2. (Courtesy of the artist)

Deborah Dancy: The Edge of Time. The artist presents her oil works on canvas, which embrace the natural ambiguity of abstraction. Opens January 9. Through February 2. Marcia Wood Gallery.

ArtsXchange Ribbon Cutting Ceremony. The community arts center, which supports all disciplines by practitioners of all ages, opens its new location in East Point at 2148 Newnan Street. January 10 at 11 a.m. ArtsXchange.

Fernando Gaspar: Floating Machines. Composed of 15 paintings, the exhibition advances the artist’s interest in the ancestral biologics within and between a primeval earth and sky while giving a nod to his Southern European mannerisms. Opening reception on January 11 at 6 p.m. Through mid-March. Bill Lowe Gallery.

Human Trafficking: The Battle Continues. More than 20 artists who use their craft and skill to display works that bring awareness to the issue of human trafficking. Opens January 8. Opening reception on January 19 at 7 p.m. Through March 12. The Shambhala Center of Atlanta.

Zydeco Concert and Dance with Curley Taylor & Zydeco Trouble. Hailed from Louisiana, the band provides blues sounds. To keep the party going, authentic Cajun food will be available thanks to Fusions Catering, and beginner’s dance lessons will be available for those who arrive early. January 12 at 8 p.m. Dorothy Benson Center.