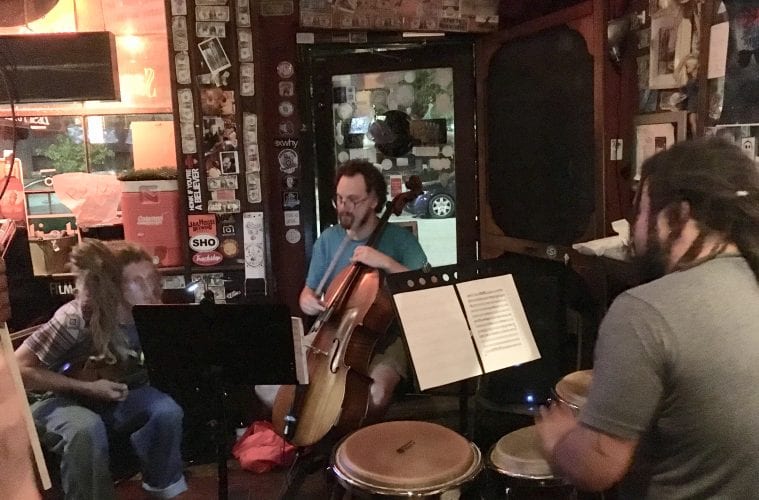 Iconoclastic charm and thoughtful playfulness permeate BASrelief’s debut self-titled record, released January 1. The trio, consisting of Benjamin Shirley (Faun and A Pan Flute, Artifactual String Unit) on cello, Majid Araim (Whispers of Night) on mandolin and Julian Scott Bryan (Bird City Revolutionaries) on congas and percussion, crafts structured avant-jazz and free-wheeling improvisation. The music ebbs and flows between gauzy oriental ambience on tracks such as “relief No. 1” and subtly controlled mayhem on tracks such as “Hugs.”

“We realize the band’s sound may lack a certain level of sonic depth resulting from the instrumentation,” Shirley says. “Especially when compared with a standard trio or ensemble with a sax, drumset, bass, keyboard and so on. However, like a bas-relief sculpture, we strive to create an illusion of depth, imparting to the viewer/listener an impression of a fully three-dimensional object/sound.”

A concert marking the release of BASrelief, with a 7-inch by W8ing4UFOs — representing the inaugural offerings from Shirley’s Past Now Tomorrow label — is slated for February 6 at the First Existentialist Church in Candler Park.