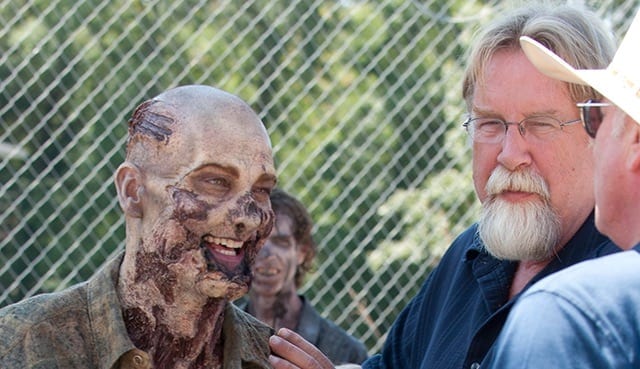 “Walking Dead” producer Tom Luse discusses the success of the series, and what comes next

When the AMC series The Walking Dead first premiered in the fall of 2010, no one knew at the time if it would last more than one season. Since then, of course, the show’s phenomenal success has become a local cottage industry due to filming in both Atlanta and Senoia where you can take specialized location tours, buy collectible merchandise and more. But the series has also helped revitalize the Georgia film and television industry by utilizing a cast and crew base that is primarily Georgia-based and not out of Los Angeles or elsewhere.

The second half of Season 7 kicks off on Sunday with high drama. The first half has divided many viewers over the future direction of the show due to the demise of two major characters and the graphic violence which was much stronger than usual. This polarizing element for fans mostly revolves around the character of Negan (played by Jeffrey Dean Morgan), who uses a baseball bat to enforce his will over others. Negan killed two beloved characters in the first half of this season.

Speaking at a recent Georgia Production Partners luncheon, executive producer Tom Luse urged fans to remember that the show has to have a degree of realism. “The Walking Dead is a tragedy,” Luse said. “Apocalypses are not good things. Surviving an apocalypse is not an easy, happy existence. There are dead people waking around trying to eat you. Bad things happen. The great thing about our show is it shows the resilience of human beings. Our characters are survivors and I think all of our main characters — Rick, Daryl, Carol and many others — reflect that humanity. How would you survive in a world gone totally crazy?” Luse is a pioneer of Georgia’s film industry, who was here through the lean times before it became one of the hottest destination points for filmmakers and television shows. His first project was in 1982, when he produced and directed Who’s Killing the Cities? as his master thesis for Georgia State University’s fledgling Film and Video program.

“I got an internship at a wonderful place called Jayan Films with a great commercial filmmaker named Jimmy Collins,” Luse recalled. “He trained me to be a filmmaker on a technical level — I worked grip, camera and did art department stuff. I got my first job as a location manager on a movie called Murder in Coweta County with Johnny Cash and Andy Griffith and I never really looked back. I just started working in the business here and I kept falling upward.”

From the late eighties through the mid-nineties, Luse stayed busy with production work on films like Glory (shot in Savannah and on Jekyll Island), television shows and commercials. But then work in Georgia experienced a major downturn. “Canada studied our industry and realized that for very little infrastructure you could get a lot of people working,” Luse said. “They targeted the film business and provisional and national incentives and it was wildly successful. The work that was in Georgia, in North Carolina, in Texas went to Canada and the business here dried up.”

As a result, Luse had to seek production work elsewhere. “I traveled the world working on movies. I worked out in Utah for a while on a series. Worked in L.A., worked in Canada, worked in New Zealand, worked in Ireland, worked everywhere but here, which is where I really wanted to work.”

Luse credits Robert Bailin, the president of Feature Systems, formerly on Krog Street (now the site of the Krog Street Market) with the recent renaissance of the film and TV industry. “Robert brought together vendors, laborers and producers to talk about how we could all get Georgia going again and that’s the beginning of what is now the biggest regional market in the United States for filmmaking,” Luse said. “The first film under the new incentives was The Joneses (2009) up in Alpharetta, and I came back from Los Angeles to do that and I never left.”

At the time, a soon-to-be-famous project was brewing in Hollywood. Luse was called to a meeting by producer Gale Anne Hurd (The Terminator, Aliens) who pitched him the idea of doing a series based on the graphic novel series, The Walking Dead. “I was staying at a motel in L.A. and across the street was a comic book store,” Luse recalled. “I bought the first 15 to 20 issues of The Walking Dead and stayed up that night and read them.”

Luse loved the series, but didn’t think it would translate to a television show. “Genre was the kiss of death in television,” he said. “I think every network turned it down. NBC had started to develop it and then got cold feet. AMC then picked it up and people started to watch and then more people started to watch.” This was an unexpected surprise for Hurd, Luse and series creator Frank Darabont (The Green Mile, The Mist), who had great fun developing and producing the series but never anticipated a massive cult following and fan base. Jeffrey Dean Morgan as Negan on The Walking Dead.

The first season was shot in Atlanta. “We had an amazing experience here,” Luse said. “For our pilot, we literally shut down about six city blocks of the Fairlie-Poplar area. When I say shut down, I mean there was no traffic, there were no lights, no noise. We only had about eight hours to dress the entire set for a weekend shoot but it was the best day ever for all the crew. For the second season we moved to a little town called Senoia and found the perfect farmhouse next to a wonderful little studio [Raleigh Studios]. And we moved in there and we haven’t left. And the relationship between Senoia and our show has grown as the show has grown.”

What is particularly impressive is how Luse has been able to rely primarily on local talent for most aspects of the series. “A lot of the crew I knew originally was based in Georgia 10 or 15 years ago so our crew is 90-plus percent local,” said Luse. “Some of the local actors who started out as scale players on our show have become series regulars. Melissa McBride, season one, plays Carol and she’s still on the show today. Chandler Riggs, who plays Carl, season one, another scale player, is still on the show.”

Luse said he believes that the best actors are theater trained and points to series lead Andrew Lincoln, a London stage actor, in the role of Rick Grimes as an ideal example.

Unlike most contemporary TV series, The Walking Dead is not shot in a digital format. Instead, it is shot on 16mm film, which is processed locally at Cinefilm. Luse said the company was on the verge of going out of business when “Crawford stepped in and said they would take over Cinefilm for as long as we shot The Walking Dead on film. That commitment by them has kept us shooting on film all these years.” And it was a crucial issue since one of the few professional quality 16mm film processing labs left in the U.S. is located in Los Angeles, which would have made processing dailies an incredibly challenging, if not impossible, task.

Probably the most unique aspect of the series’ success is its passionate fan base who are hungry for spoilers about the show’s dramatic arc. “Some fans have websites called ‘Spoiling the Dead’ that dedicate themselves to finding out what we’re doing and they show up wherever we go and try to get inside information,” Luse said. “Luckily, we’ve been pretty successful about keeping that information private but we work hard to maintain that great relationship with our fan base while getting our film made. I frequent a coffee shop in Senoia and I’ve meet people from Finland, Hong Kong and all over the world who’ve come just to see where we film.”